This has been an odd week for news, especially today. Hence an unusual approach here.

The big news for this readership is the beginning of a difficult interval for the Fed, and the bond market in early stages of destabilizing in anticipation. The 10-year T-note reached 3.00% this morning for the third time since February, each time retreating but this time in doubt. Mortgages this week reached 5.00% for borrowers with anything less than perfect credit. The market signal of Fed danger is the 2-year T-note, today its highest yield in exactly ten years.

The whole TV news media is trapped in Florence’s fizzle to drizzle, the “storm of your lifetime” turning out to be conditions which my brother regarded as great surfing at Montauk. Our mom rode out some tough ones, and these storms are not to be trifled with, especially by weather-porn profiteers.

The stories missed: last night several dozen homes blown to smithereens north of Boston, a gas line overpressure accident but initially feared as terrorism near the 9/11 anniversary, one fire chief describing as “Armageddon.” CNN is not on the scene to ask you, “How do you feel” while standing next to a crater, formerly your home.

Paul Manafort copped a plea this morning, no word on what he has sung to Mueller.

A report commissioned by German Catholic bishops, this week “found that at least 1,670 church workers — more than 4% of the clergy — had been involved with the abuse of 3,677 children” (NYT), and so many without research access to confidential records.

Markets reacted favorably (and should) to new China trade talks to be conducted by Secretary Mnuchin, not crazies Lighthizer and Navarro, but tanked this morning on Trump intentions immediately to slap tariffs on $200 billion in China imports, talks or no talks.

Turkey’s central bank jacked its rate to 24% over the objections of Erdogan. A bad recession is better than hyperinflation.

Of all stories, the best illustration of human foibles and fleeting competence… two Russian assassins in March tried to kill a small-fry defector in the UK. The military nerve agent almost killed the target, and his daughter by accident, and sickened first-responders. The assassins tossed the excess nerve agent in its perfume bottle into the trash where a dumpster-diver retrieved it, gave it to his wife as a present and killed her, sickening himself. Inspired UK police work back-tracked the goons from Russia to their short visit near the target’s home, and found nerve agent traces in their London hotel room.

Czar Vladimir said these men are ordinary civilians and tourists in the UK,  and yesterday put them on Russian state TV. Asked on the air where they worked in Russia, “To cut a long story short, we’re in the fitness industry.” (Yes, that would be one way to put it.) And, “If we tell you about our business, people we work with will be affected.” (I imagine so.) Perhaps they bungled, and soon will be counting ice floes passing Murmansk, or perhaps intentionally bungled, to show the world how little the Czar cares for it.

Now, that’s a roundabout way to get to the Fed’s difficult job unfolding. But I’d a lot rather be Manafort, an assassin, on the beach at Hatteras, or Pope than to have to do what the Fed has to do now.
The easy part is over. The Fed has raised the cost of money from nothing to something, but at 2.00% is not hurting anything. It will hike again at the end of this month, again in December, and once or twice more in spring. We knew that, markets priced accordingly.
…Until this week and two very capable Fed leaders flipped from dove to hawk. The whole dovecote previously had created belief in a Fed pause after the next three and at most four hikes, somewhere 2.75%-3.00%, a level which the whole group identifies as “neutral,” neither stimulative nor restrictive. The flippers this week formalized the new question: if the economy next spring is still as hot as now — even without rising inflation — how far above neutral should the Fed go to slow the economy?
The Fed has two problems with this debate: arriving at good policy, and if that policy is intentionally to slow the economy, how to justify it to the public.
I am a Fed believer, and hope they will take this advice: drop all of this “neutral” B.S., at least in public. The concept of neutral assumes Fed ability to manage the economy onto a sustainable meadow with wildflowers and soft music, doubly futile because the Fed knows that the neutral rate changes often and its location cannot be verified.
Bright and able Lael Brainerd in a speech on Wednesday: “Similar to other equilibrium macroeconomic concepts such as potential gross domestic product (GDP) and the natural rate of unemployment, the shorter- and longer-run levels of the neutral rate are not directly observable, so they must be estimated or inferred from the movements of variables that are observed, such as market interest rates, inflation, the unemployment rate, and GDP.”
The overnight cost of money is directly controlled by the Fed. Long-term rates move in markets, occasionally (the last ten years) tilted by central banks, always sensitive to inflation, but today on the low side and more stimulative (maybe) than the Fed would like. Brainerd again: “Part of the reason the 10-year Treasury yield is unusually low is that market expectations of interest rates in the longer run are themselves quite low.” British infantry in WW I sang this lyric to the tune of Auld Lang Syne, “We are here, because we’re here, because we’re here because we’re here….”
The other newly fledged hawk is Eric Rosengren, president of the Boston Fed –a lovely, blunt man. From a WSJ interview: “’We don’t know with any kind of precision’ where a neutral interest-rate setting is, ‘but it’s certainly higher than where we are now, and is likely to be maybe a percentage point higher than we are now. So the path for the next three or four hikes, unless something happens in the economy… I don’t think there’s anything special about pausing at any one point.’”
Then the killer. “If growth is strong, inflation is near 2% and unemployment is below the level officials estimate to be sustainable over the long run, ‘then it’s going to be pretty easy to say we need to do more.’”
Ow. It is one thing to say that we don’t know what we’re doing — don’t know where or what neutral is — when being ultra-cautious. But it is not okay when being aggressive and risking the global economy.
The Fed must proceed with some pre-emption, and error is by far the largest probability, high or low. The most helpful thing the Fed could do now is to shut up. Let Powell speak to policy because he is gifted at expressing common sense. All other Fed officials should stick to Very Important Speeches to civic groups about the mysteries of clearing checks.

The 10-year T-note in the last year has been so stable that when — when — it breaks above 3.10% and mortgages above 5.00% the shock may have more economic effect than the rate: 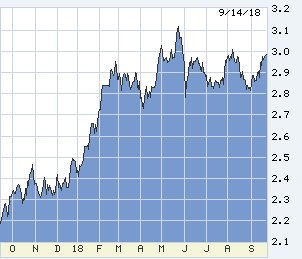 The 2-year note is the telltale. These securities live and die with the Fed, and 2s traders are the best Fed-watchers because they have to be. Beginning in June 2s priced an extended pause at advertised neutral, 2.50% to 2.75%. Now neutral is at least .25% higher, half of the Fed is arguing against any pause at all — and this week 2s blew out the top: 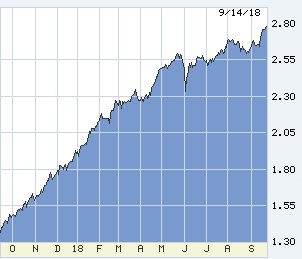 2s in blue, Fed funds in red. 2s are the great predictor — not by a lot of time, but 2s top before the Fed does, and 2s are rising:

And 2s and the Fed should rise. In our totally irresponsible fiscal policy, the Treasury deficit in August was $100 billion greater than August 2017. You get what you pay for: overheating. Bad political leadership can force the central bank to be tighter than it wants to be in Turkey, and here, too. The Atlanta Fed GDP tracker is on fire: