Bonds are still in denial about the Fed’s plans, grudgingly making mini-adjustments. Long-term and short-term rates rose this week, the long ones only a little but near their six-month highs, and short ones… the 2-year T-note hit a new high for the decade.

The news front this week was unusually quiet. 2nd quarter GDP arrived as forecast, 4.1% annualized. The likely average for the year will be about 3%, still far too hot for the Fed’s long run, despite the core inflation measure in the GDP report smack at 2.0% target.

All administrations take credit for good economic news, and a few deserve it. Not this one. If the tax and spending bills have produced higher GDP growth, the price is too high: tax revenue is $100 billion/year less than assumed, not rising with faster growth as advertised, the federal deficit headed for $1 trillion this fiscal year and next and next….

Other political news settled down: Czar Vladimir will not visit (Mr. Trump instead inviting himself to Moscow), and we made a deal with ourselves not to worsen the trade war with Europe. The long-overdue Facebook and Twitter pratfalls had no effect on credit markets.

Financial media are running and re-running two stories: a slowdown in housing and the imminent prospect of “yield curve inversion,” both signaling recession.

These stories are mistaken but could become true, although media have not discovered the power of housing nor its linkage to inversion.

Housing is tough to cover. It does not work like other financial markets: Facebook stock can be sold anywhere on Earth (and has been), but houses are where they are. Sometimes houses are located near demand, and sometimes not. Today’s illusion of softness in housing — this summer’s down-wobble in stable sales of new and existing homes — is just a mismatch between locations.

In the most dramatic demographic event of our time, 60% of US counties suffer out-migration, nearly all rural and from only 41% in just a dozen years. One result: demand for housing lies in technology-hot urban areas, but all of those have exhausted their supply of developable land. Thus suppressed construction, and little inventory for sale, especially low-priced (land is expensive), and in the sixth-straight year of sustained price increases. Housing generally could enter a period of slower sales and price increases without signaling economic distress.

Switch now to inversion, then link to housing. Today’s focus on inversion illustrates the “streetlight effect,” not a predictive economic pattern. This effect is an observational bias first mentioned in psych literature in 1964 but based on a story originating in the 1920s.

Late one night a policeman saw a man searching for something under a streetlight and offered help, asking what was lost. “My keys,” and they both looked until the cop realized that the man was soused, truly snockered. The cop asked if the man was sure that he had dropped the keys there, and he replied, “No, in the park, but the light is better here.”

Thus the inversion streetlight. It is true that short-term rates rising to or above long-term ones are the result of Fed hikes, and such moments are often followed by recession. However, often not — for five straight years 1995-2000 in one example. An inversion may relate to the cause of a following recession, and maybe not: the 2001 recession was caused by a stock bubble and the onset of global deflation, not an over-tight Fed. The Great Recession, 2007-2009 was the work of Wall Street credit pirates, not the brief “flat yield curve” preceding.

Certainly, short-term rates rise because the Fed pushes them up, but an inversion requires long-term rates not to rise while the Fed is pushing. The Fed began a hiking process in 2004, and long-term rates never did rise, “Greenspan’s Conundrum” then explained as a “global savings glut” — an absurd description of more buyers of bonds than sellers. Globalization made inflation impossible, and buying bonds prudent no matter what the Fed did.

In today’s possibly developing inversion, the Fed is doing its pushing, but as in previous false signals long-term rates have stopped rising. Causes: US long-term rates are wildly higher than those of any other good credit issuer. Also, after ten years of hysterical effort by the major central banks to raise the rate of inflation to 2%, only the US has made it.

In classic inversion signals (1973, 1979, 1989…), the Fed hikes and long-term rates rise for a while and then stall, the stall because borrowers can no longer afford to pay. Not now! Sure, long-term rates have risen a point-and-a-half from all-time super-lows, but 5.00% mortgages are eminently affordable. Any slowing in housing is due to exhaustion of urban land and sustained increases in home prices — not weakness among consumers or builders or bankers.

The most reliable recession signals are housing ones. Inversion or no inversion, a big jump in mortgage rates precedes recessions. If mortgages rise to 6%, then worry.

Second, spikes in sales of new homes are (or were) always accompanied by overbuilding and easy underwriting, both standard late-cycle states of exuberance which when blown-up reinforce the downward recession spiral. Today we have a shortage of construction (no land to put it on), and mortgage underwriting is still good and tight, enforced by regulation, not liberalized by up-cycle.

These missing elements may make it hard for the Fed to arrange a slower economy. The Fed may have to go farther and longer than it thinks before housing cracks and takes the economy with it.

And — ouch — just because long-term rates froze six months ago does not mean the Fed us unable to bulldoze them higher by raising its cost of money. We’ll know more soon about that.

Gather ye rosebuds… The 10-year T-note has stayed under 3.00%, but (next chart) the 2-year is pushing up from underneath. The spread between the two narrowed early this month but is back out to 30bps. If sustained as the Fed hikes further, the spread is the blade of the bulldozer: 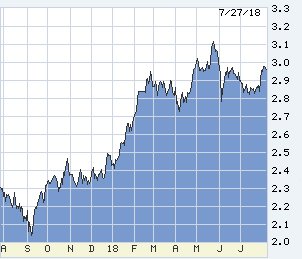 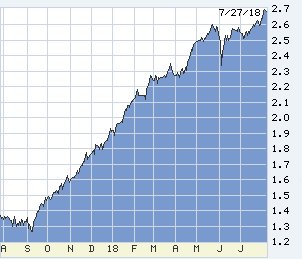 The standard 10s and 2s inversion chart, the streetlight:

Sales of new homes are the most reliable indicator of all. Inversion believers say that they precede recessions by 12-18 months. So do tops in new homes. Housing is cause, inversion is effect. Today’s constrained new construction is plain:

Today’s GDP number beats a poke in the eye, but this prolonged expansion is the work of the Fed. Also the duty of the Fed to limit. Today’s report makes it easier for the Fed to stay on upward track.