Markets were quiet this week. We have no metric, just hunch and anecdote, but the other stuff is affecting markets. Professionals are addled, risk impossible to quantify, chips pulled off tables everywhere. More so overseas than at home. Here we are used to a high level of political goofiness. The US for more than a hundred years, despite our occasional mistakes has been the global rock, the source and center of stability for all of the others. Among them our ability as stabilizer now and in the future is in greater doubt every day.

Trump is more effect than cause. The one-third or more of America supporting him will have extremist force and effect long after he is gone, and a different but extreme one-third awaits in the opposite wing. Trump or no Trump, these wings are less able to deal with each other today than at any time since we fought it out.

Lighten up for a minute.

We are all tempted to spin, and from time to time have trouble embracing truth. This week on nearby Long Island beaches two kids were lacerated by something on the same day. ABC News reported: “Islip town officials initially confirmed that the boy’s bite was indeed a shark attack, but later issued a statement saying that the 13-year-old was bit by ‘what may possibly have been a shark.’

“’It has not been totally confirmed’ that the boy was bitten by a shark, said the town spokesperson, but lifeguards and emergency medical personnel who treated the victim assumed it was a shark bite when they found the shark tooth in his leg.”

My mom lived out there for 30 years, nice people, no more given to struggling with reality than any of us. Just humanity.

Then, specific to Trump is the noise level. Imagine if everything in the world today were exactly as it is, but Silent Cal Coolidge was president. We would enjoy this economic picnic even in knowledge of its unsustainable pace and fiscal footing. Long-term mostly external risks in unpleasant places, but perfectly normal, not a single ant in the potato salad.

This week was scheduled to be a big week for the Fed, Chair Powell’s first formal testimony to Congress. To say that Powell’s testimony was obscured by other events is the understatement of the decade. Testimony by the Chair takes place over two days, first to the Senate Banking Committee and then to House Financial Services, this week on Tuesday and Wednesday. The House hearing room is huge, seating and desks for all 60 members, audience, staff and so on. As Powell’s Wednesday testimony entered its third hour, nobody was there but Powell and the junior Congressperson from Maine, who began his allotted time by saying, “I hope everyone knows that Maine is America’s Vacationland!”

That which Trump’s nova can obliterate in blinding brightness it can also illuminate. So it has been with the Fed in the last 48 hours. First yesterday in Trump’s off-hand opposition to Fed rate hikes, repeated today and more: China and Europe are hurting us, are currency manipulators, and we’re going to slap tariffs on everything which China sells to us.

These words are not “meddling.” They are attacks on global order and markets, which have reacted. As felt overseas especially, if there is no effective counter-force in the US to confine these plans for demolition, then the thought spreads: how to protect myself? Not yet elbowing women and children from lifeboats, but getting there.

The criticism of the Fed will have no effect on the people at the Fed except to reinforce their independence and if anything accelerate rate hikes. Powell’s best line yet: his intent to “wear out the carpets” in the Capitol building by visits to senators and representatives. Congress created the Fed and is the seat of its power.

Presidential criticism of the Fed does harm to the ultimate source of all power: the people. All central banks are confidence games. Very few people actually understand what they do. In moments of crisis — the high purpose of central banks — they are terribly vulnerable to hostile mobs raised by every tin hat and axe-grinder around.

In recent example, we have no national consensus on the cause of the Great Credit Bubble or the Fed’s actions during and after. Wall Street deployed perfect defenses and escaped accountability, its fixed-income operations and CEOs as guilty as Willie Sutton. Yes, the Fed missed their behavior, but no US regulator then was charged with credit regulation. Obama claims recovery as his, as all presidents claim good news, but Ben Bernanke was the hands-down rescuer, all done before Obama took his oath, Bernanke one of America’s greatest heroes and not a single high school named after him.

The Fed can function because even Congress knows that it can’t be trusted with money. But among the people, just below the surface lie Fed conspiracy theories, dislike, and hatred all rooted in distrust of government, elites (rich or academic), bankers, and markets. The antidote to superstition is science, but public understanding of money has not progressed far from belief in causation by conjunction of the moon and Venus.

Civil society depends on cooperation and trust. It is incumbent on every one of us to insist on those two traits from ourselves and everyone else.

Next week, back to easy stuff like inversion, the neutral rate of interest, recession risk, and rate hikes. Apologies for soapbox.

The 10-year T-note in just the last week. All of that NATO, Helsinki stuff… not a flicker. Guess which morning somebody took a shot at the Fed? 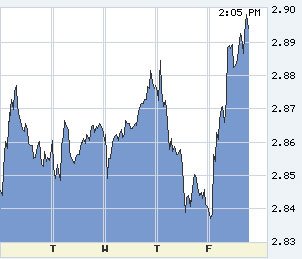 The 10-year T-note in the last year, still in the same place, six months and counting: 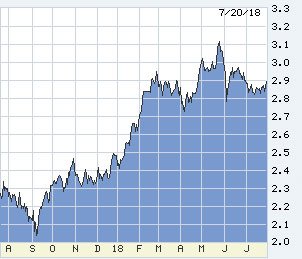 The Fed-sensitive 2-year T-note is also stuck, in the early stage of a forecast that the Fed now at 2.00% will next year stop short of 3.00%: 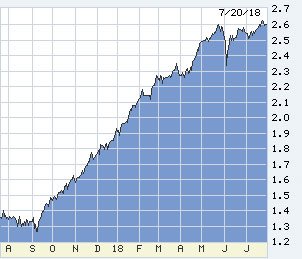 The picnic is still just fine, thanks, but had better cool off in Q3 or we’re going to hear a lot more from the stable genius of central banking: 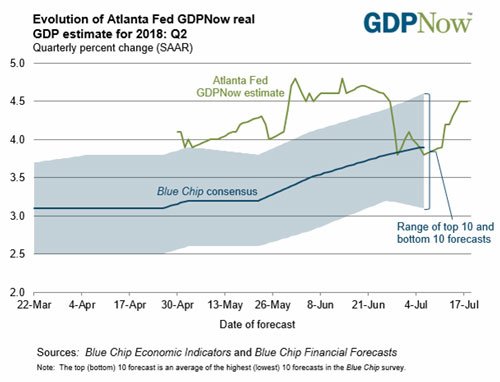