The credit markets rate-bottomed last week, the 10-year T-note at 2.37%. The long-overdue rebound began but has stopped cold at 2.50%, mortgages in a confusing mass of rate-versus-fee near 4.25% and holding. Nothing to worry about.

The first week of each month is big-data. Payroll reports are due on the first Friday, and have been strange, January gaining 312,000, February 33,000, and March arrived at 196,000 — inches from the average. Wages had popped up in February and un-popped in March. Nothing to un-pause the Fed.

Likewise the twin ISM reports from purchasing managers for March: the manufacturing one at 55.3 (54.2 February), and the service sector 56.1 (59.7 February). “50” is breakeven, “60” a Fed disturbance, both reports in sweet spots, birds chirping happily.

We are past fear of an overdoing Fed, past the December stock market dive, past the shutdown, and now tulips and crocuses.

In the overseas review, China is central because most of the world sells so much stuff to it (not us). To the degree we can believe any China data, it has all be stopped its debt expansion, which from 2009 to 2016 rose from 130% of GDP to 240%. Half of that debt is owed by state-owned enterprises. Leeches. We can’t know how much of China’s slowdown is due to debt-cap versus tariffs, but bet on debt-cap. Bet further that China will use any device to export its growth difficulties.

There will likely be a China trade deal, if only for appearances, and maybe a little economic boost if tariffs are lifted. Markets could care less, so long as trade relations do not deteriorate. It is unwise to expect much change in China’s behavior.

Europe feels the drag perhaps even more than Asia because of Europe’s sale of itself to German control in exchange for good German money which it can’t afford. The European economies used to be leaders in export/import adaptability — not domestically, but in trade. Now neither. But not in extremis at the moment: the German 10-year is back above zero, yielding 0.009% today. The Italian 10-year pays 2.48% in the same currency, the Italian economy sliding to no growth at all and its budget deficit growing back toward 3%.

Brexit gets a ton of bad press. An uncontrolled “crash out” would do damage, but impossible to quantify. The UK stayed on its own currency, the pound dong fine at $1.30 in the middle of its three-year range, and the UK economy is vastly more adaptable than the continent. Media coverage has two dominant threads, both irresponsible. The first is by lefties here, there, and continental who think it so foolish to turn away from the one-world, so-sophisticated, forward-looking benefits of surrendering sovereignty to Europe. That down-the-nose attitude does not square with anti-democratic, German-controlled Brussels and rule-crushed continental economies.

The second false thread asserts the failure of UK democracy. It takes some leap of faith, and non-cynical acceptance of humanity, but these Brexit proceedings are one of the great monuments to democracy. The UK is fragmented on Brexit issues, but all are in the open, Parliament faithful to its long history. Britain will figure this out. It is not tidy, nor is it supposed to be. Consider the proceedings of your local city council, or better yet your HOA attempting to mediate a choice of paint color, or the presence of a satellite dish. Agreement on Britain’s economic, political, and judicial relationship to Europe should be quick and simple?

Which leads to… here.

Mr. Trump in the last week has appointed two people to be Fed governors. Both are unqualified for one reason: both have demonstrated their inability to separate politics from policy. But, in all seriousness, don’t worry about it, even if one or both is confirmed by the Senate. The Fed has worked around such people before — if not of serious and able mind, such people can’t get anything done. Financial markets have ignored the nominations, just as they have the president’s hostility to chair Powell and demands for immediate cuts is rates. Noise is distracting, but nothing to worry about. So much better on a hike yesterday, the liquid-silver calls of meadow larks on our high prairie.

In 1969 Dick Nixon wanted to take the Supreme Court down a peg and nominated the unqualified Clement Haynsworth. Upon his rejection by the Senate an angry Nixon picked even less-qualified G. Harold Carswell, and the Senate canned him, too. Nixon settled on Harry Blackmun, together with Warren Burger the “Minnesota twins.” Be careful what you wish for: four years later these men were “ayes” in Roe v. Wade.

No matter if a supporter or opponent of Mr. Trump, his entanglements this week might concern the unwary. Wind turbines do not cause cancer. Asylum seekers attend their hearings at an 89% rate, not 2%. We will not close the border with Mexico. But, if a 75-year-old spouse tried repeatedly to find the word “origins” and instead got “oranges,” and in the same conversation moved a father’s birthplace from New York to Germany… time to take the cognition test. But, shoot, everybody already knows, and if it comes to that we have our procedures.

Dementia might be an improvement for the Democrats. To “swat” is a term from the gaming community, in which a call to the local SWAT team alleges violence in progress at an adversary’s home. So far, the outer-left has swatted centrists Klobuchar and Biden, and otherwise out-tea-partied the Tea party. We are not going to pack the Supreme Court. Capitalism is not evil. The right and center resist climate action because the left is rule-crazy. But, nevermind — the Democrats have all of 2019 to figure out themselves.

Markets don’t care about any of this stuff. One weird political news flash after another and markets don’t even flicker. Worry about important stuff. Will my hedge-trimmer start this weekend? How is the charge in the mower battery? Is the gas too old? How do new neighbors feel about Roundup?

The US 10-year T-note takes a well-deserved breather: 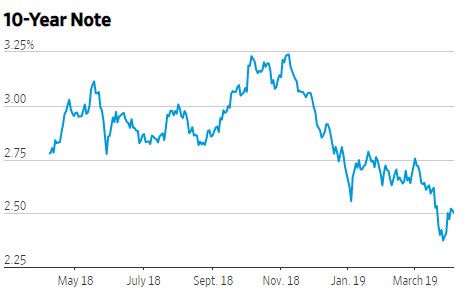 The housing market is just fine, thanks. Five years of 5% annual appreciation should slow down: 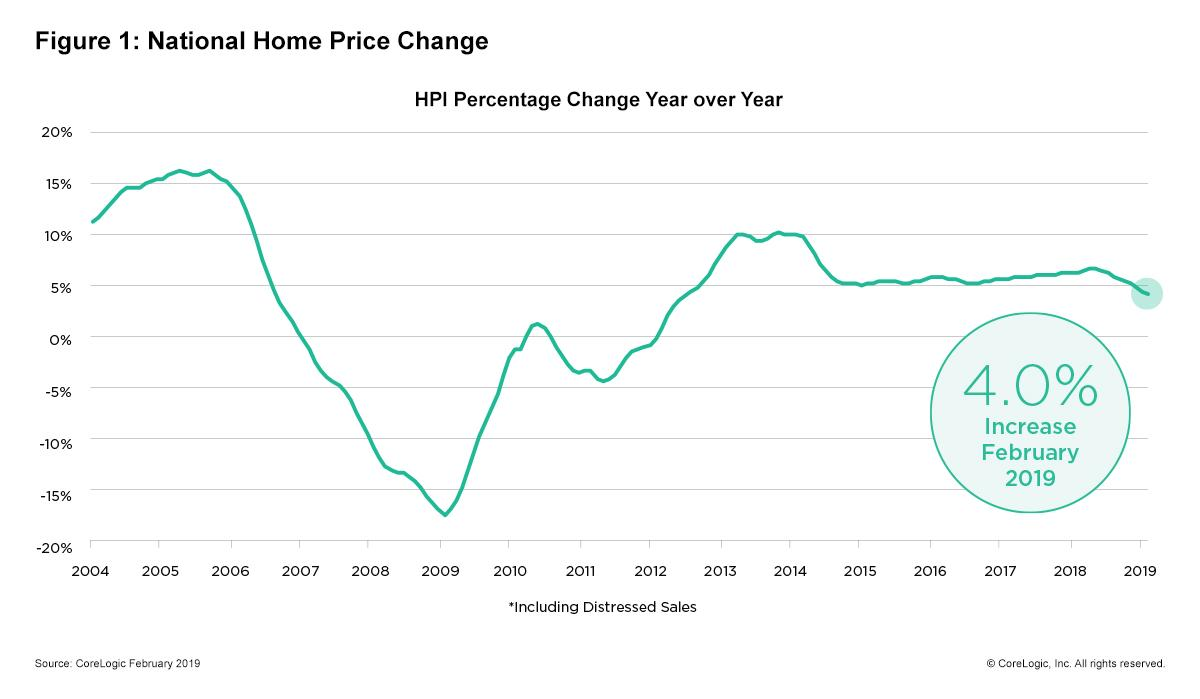 The Atlanta Fed forecast for January-March GDP has risen with spring temperatures: 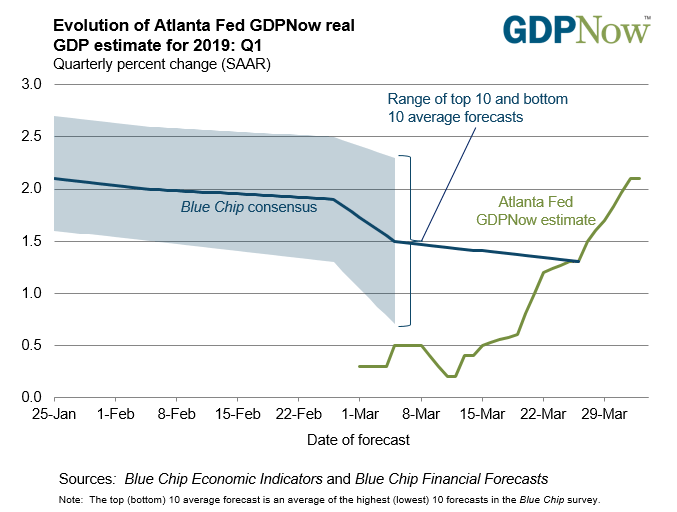 The ECRI is now in a comforting recovery: 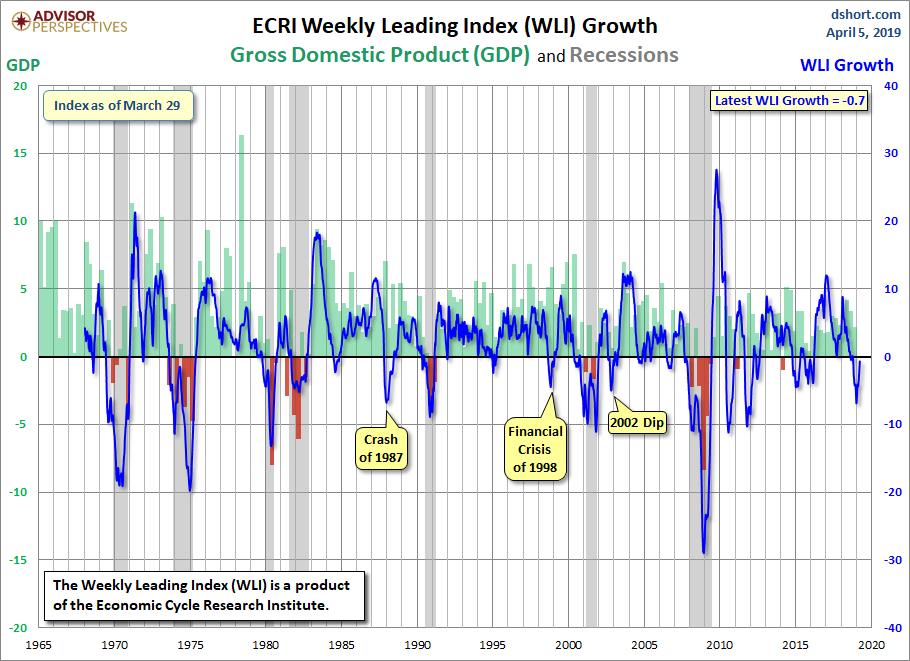