Apologies for interrupting the NFL draft, and the entire Democratic party running for president. But we have unusual news from the financial markets, the economy, and the Fed.

Four weeks into April, and the all-important 10-year T-note has traded between 2.47% and 2.59% the entire month. Unusual? Hah. 10s were supposed to continue their upward rebound after the soft patch in winter and excessive hopes for a Fed rate cut.

Two things, connected. The first at its deepest: China. The second: the Fed has embarked on an unprecedented episode of navel-gazing. However, despite the Fed’s intense focus it has not discovered the connection to China.

To begin the trail from the Fed’s belly-button to China, two new pieces of data. Rates this week were on the rise until Wednesday’s news that Germany’s economy had softened (again), and the German 10-year fell below zero (again). Germany runs an export economy, and China is faltering as a buyer, and undercutting others who would buy from Europe.

The second data: 1st quarter US GDP grew 3.2% in the report this morning. Idiots at the WSJ say the economy “roared back,” joined by the loyal few who still believe in last year’s tax cuts. Look closer. US final sales grew only 1.3%; the 3.2% roar came from unsold inventories and a temporary increase in exports over imports. The GDP contribution by investments was terrible, un-boosted by tax giveaways to business.

These are not recession figures, okay on a centerline of GDP growth near 2%. The alarming component of the report: inflation collapsed below the Fed’s target, down to 1.3% annualized (core personal consumption expenditure deflator). Falling inflation inflates real GDP: if core PCE had held at 1.8% as-was in Q4’18, 3.2% growth would have been 2.7%. GDP inflated by falling inflation is how Japan got to be Japan.

This falling core PCE will reinforce the brave crew at the Fed which in December insisted on a thorough re-think of the link between employment and growth, and inflation. The theory (Phillips’ Curve) has been Fed law for eighty years. The re-thinkers have been blunt this month, saying out loud the unthinkable: no matter how fast GDP, no matter how low unemployment, if inflation begins to fall away from target… the Fed should cut the cost of money.

This 1.3% PCE requires confirmation by the zillion other measures of inflation and sustenance through spring. If sustained, the Fed is going to ease, and that’s why 10s stopped rising — although markets are as uncomfortable with heresy as the Fed.

Back to the Fed’s umbilical preoccupation. The Fed’s majority absolutely gets the breakdown in theory, but are lost as to cause. Badly so, sez here. Understandably so: if you carry the weight of the world every day, rightly fearful of the power of your own action or inaction, you’ll inevitably tilt to believe that all causes and effects are your fault.

Hence the gaze locked on internal. In the last few months the Fed has poured out into public its re-examination of 2% inflation target. Too low? Perceived in markets as a ceiling, not a center? If inflation has been low in a recession, should we allow it to rise above 2% in symmetrical correction?

All of this devoted to the theory of “expectations.” If we convince markets of our expectations, then markets will follow. Sometimes, sure — but ridiculous in an era of secular disinflation, even deflation which no major-nation central bank has been able to reverse, no matter how much QE, direct monetization, or negative interest rates. This era has not been caused by over-tight central banks, and we have heaps of evidence that it cannot be reversed by central banks.

Something else is afoot, and neither the Fed nor ECB nor BOJ can stand to look at it. The era of disinflation began in the 1990s concurrent with the IT explosion (price transparency, labor cost global fungibility), and the opening of China and Eastern Europe to trade — trade growing faster than global GDP.

Europe and Japan have internal structural issues which the US and Fed do not. The overriding global cause of soggy economies and dangerous disinflation is predatory China, its thieving magnified by IT and trade.

China must keep its engine going, fearful of unemployment. Unfortunately its state-owned enterprises (SOEs) are more than half of its economy and not globally competitive, and laden with debt which cannot perform. China can’t reform the SOEs without layoffs, and so when it hits a soft spot caused by another effort to slow the creation of debt, it gooses debt to speed up. Which undermines the whole external world, thus: free financing to SOEs and others inside China, and to their export customers makes the SOEs competitive.

The WSJ’s Bill Galston this week described China’s wildly subsidized bid to supply 846 rail cars to Chicago’s transit system. Nobody in the US even tries to make them, and China came in 25% below Canada’s Bombardier. If this predatory trade were just about rail cars, no big deal. But it’s about everything China makes and sells.

China is forcing down global prices by taking on ruinous debt in hopes that one day it will have put everyone else out of business and then can raise prices. Disinflation going to deflation is a bad risk, but the worst may be China’s own ultimate reckoning.

Is this an argument in support of Trump’s trade war? In objective, yes. But tactically it is  doomed. Read five minutes of China’s economic history with the West, and you’ll know that one-on-one battering and public humiliation of China will never work. China feels thoroughly entitled to resist and to evade any agreement or rules of trade. It’s leaders refer contemptuously to norms of international trade as “American language.”

In the history of trade negotiations, success comes in private and in concert, which is still possible. In the meantime the Fed may try to fix a trade issue and IT revolution with excessively easy money, and get nothing for its trouble but asset bubbles.

Don’t be depressed. It’s likely to turn out okay, if disorderly. In the old days we’d have a war. 🙂

The 10-year in the last year. Chart quirk: to go lower, 10s must go lower, preserve downward trend. I doubt that until the Fed makes easing noises, and this one-quarter PCE inflation fall is not enough: 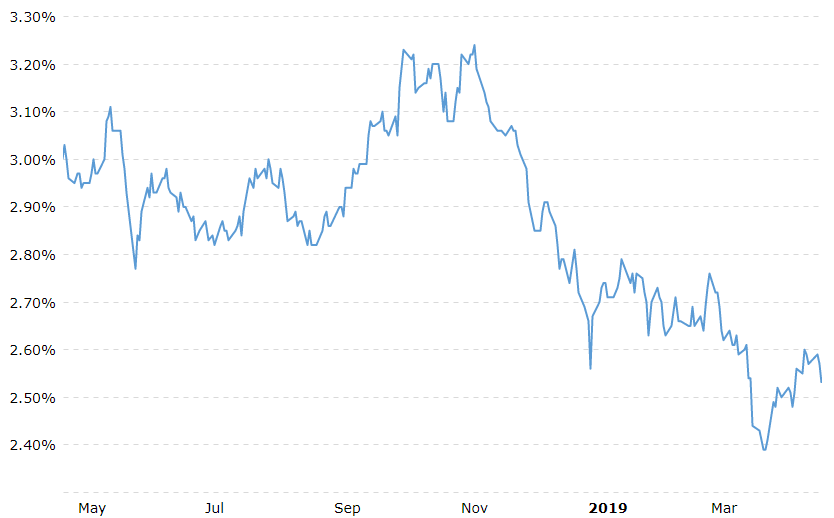 The Fed-predictive 2-year T-note shows the change in Fed calculus in just the last five days, the thumps down after German news on Wednesday, and PCE today. The Fed’s band is “2.25%2.50%,” and in one week markets have flipped from open-pause to cut-watch:

The ECRI continues to improve, best in 23 weeks. The Fed will… should… ease into this? 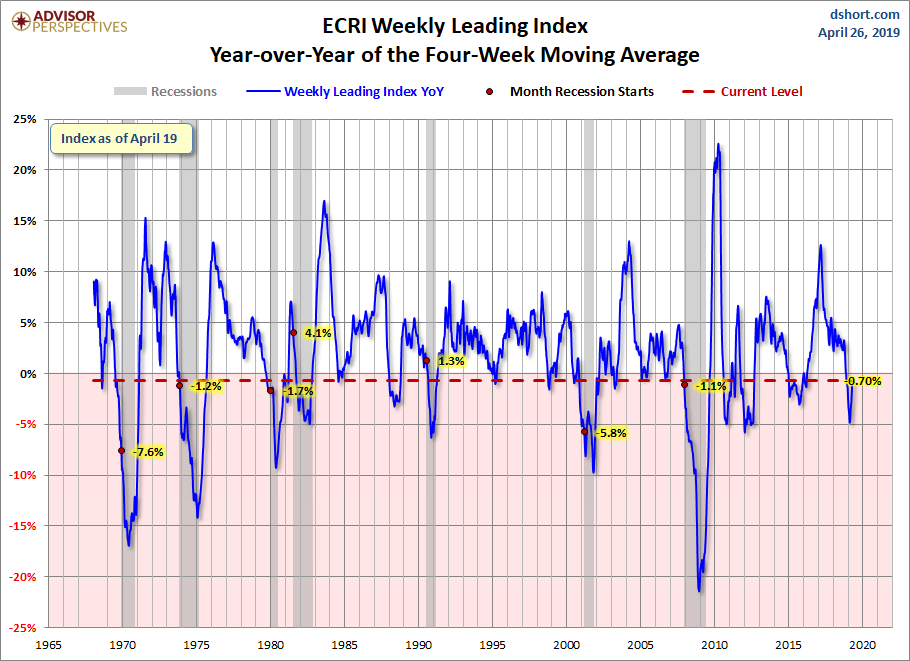