The Fed-predicting 2-year T-note has oozed its way down to 2.43%, an 11-month low. The Fed’s “policy rate,” known as the fed funds rate, the overnight cost of money, is set in a band 2.375%-2.50%. The Fed in the last ten years has insisted on a one-eighth of one-percent band instead of a single rate with routine and minor wobbles above and below. The band is hard to write and think about, and markets have ignored it, treating the top of the band — 2.50% today — as the peg, and tying other rates to that top. “Prime” is the Fed plus 3.00%, thus 5.50% since the Fed’s last hike in December.

Quibbling over one-eighths of a percent is ridiculous except when trying to figure out the Fed’s next move. 2s trading under 2.50% is a market tilt to belief that the Fed’s next move will be to ease. And 10s just above… the same hunch building for lower.

Why ease, you might well ask? Incoming data are soggy, but not submerging. This week’s whole run: January retail sales better than the December pit, core CPI drifting down from its excursion above 2% target, and orders for durable goods, construction spending, sales of new homes, and industrial production all close to flat.

No rate-drop catalyst there. This week the Treasury borrowed $38 billion of 3-year notes, $24 billion of 10s, and $16 billion of 30s, all new money, not rollover. Run a one-trillion-dollar deficit, and we‘ll do a lot of that. But this week’s auctions of all of those IOUs were effortless, boosted by weakness overseas.

The rate decline since November has the feel of “What are we doing up here?” — not a 737 Max. Yet the Wall Street propaganda machine is stuck on negative. It took those worthies a long time to know what newsies and websters have known forever: negative headlines grab more eyeballs than good news. Fear opens more accounts than can’t-miss huckstering.

Hence from financial people more new negative blasts about housing. It is true that housing has been a superb indicator of past expansions and recessions, especially the moment of “tip-over” before recession. And data today is softening: prices are rising at a slower pace, and not at all in some previously hot markets, for-sale inventory rising. The following is not so much a forecast as a little coaching on how to read housing data.

Affordability may be the slipperiest of all housing data. One of the best analytics was developed by PMI, the mortgage insurer as a guide to its underwriters. PMI had weighted one pattern in back-look analysis above most: rising prices portend future weakness, the hotter the weaker, especially if diverging from local incomes. And the reverse: flat prices were protective. For several years in the run-in to 2008 disaster, PMI’s risk-weightings of cities found the flat prices and healthy relationship to income safest of all in one city: Detroit. PMI gave no weight to migration, and missed the accelerating evacuation of Detroit. PMI is bankrupt.

Markets receiving in-bound migration often enjoy healthy increases in price beyond increases in local incomes. Also, local incomes often rise even when prices are flat, and later release the accumulated purchasing power. Scarcity of land versus migration will make any community “unaffordable,” but families line up to buy. Median incomes are useless as a metric because of two-income households, and the typical buyer with supra-median income.

Knit all of that together with one powerful demographic change: all US job gains during this longest-ever recovery have taken place in cities or close-suburban areas. These urban areas are short of land to develop and receiving IT-pulled migration.

Credit has defined all prior housing cycles, both on the way up and down. Hot housing begets eager lending and buying, and a general deterioration of household financial strength from overreaching. Heat also encourages overbuilding. It was not until adulthood that I began to think that the philosophical foundation for my favorite cartoon is the housing cycle. For the ultimate encounter of exuberance with gravity, nothing beats Wile E. Coyote.

This time Acme Mortgage is protective, not a box of dynamite, and likely to be so for a long time. After the banking disaster in the Great Depression, regulatory discipline held for fifty years — it did not falter until Greenspan’s fondness for self-regulation. Now it will be a long, long time before financial markets will be able to create and distribute suicidal IOUs.

The economy will hit something unpleasant at some point, but this generation of homeowners is arguably the strongest financially — ever. At the next downturn there will not be a cascade of weak dominoes. And the same is true for builders denied access to gasoline credit. These strengths have costs: housing has not pulled the economy forward as in the past, and we are short of supply. But it’s a good trade.

The 10-year T-note in the last two years. As a chart matter — “technical analysis” — we are poised for slightly lower, held up only by the Fed: 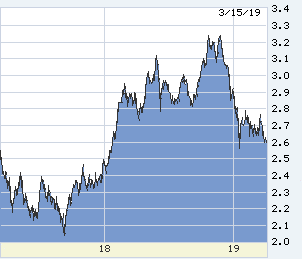 The 2-year T-note also in the last two years is lengthening its forecast of no change at the Fed, but adding a downward kicker: 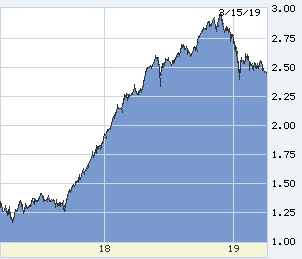 The Atlanta Fed’s forecast for the first quarter has only a couple of weeks to go, and is not pretty. However, nearly every forecaster expects a rebound in Q2, if not a big one: 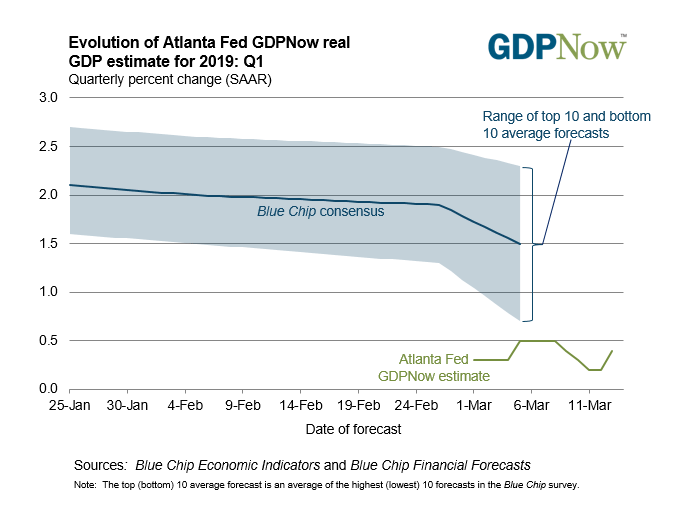 The ECRI for the second week has improved slightly, still in dangerous terrain. Its metrics heavily value the flat yield curve, which is deceptive, but the ECRI’s record is so good that we should not dismiss its warning: 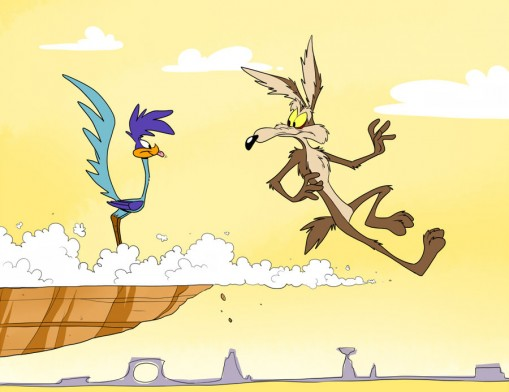