Scary reports are giving way to better if ordinary ones, and interest rates are rising slightly. There is no way for rates to fall below February levels without news which would tilt the Fed toward cutting the cost of money — the whole Treasury maturity spectrum out to ten years had fallen within a quarter-percent of the Fed’s current 2.50%. Mortgages are moving toward 4.75% after a run at 4.50%.

On the other hand, the newest data is not strong enough to disturb the Fed’s open-ended pause. Chair Powell took a step forward, his testimony to Congress a splendid blank. Long-delayed 4th-quarter GDP arrived at 2.6% annualized, the brand-new February manufacturing ISM at 54.2 down a little but healthy, NAR reported pending home sales in January up 4.6%, and Case-Shiller has the rate of increase in home prices softening but still 4.7%. No recession in any of that.

Questionable and confusing: the GDP report does not crossfoot with exceptionally weak December retail sales. Personal income allegedly jumped 1.0% in December and fell 0.1% in January, both improbable. Personal consumption expenditure core inflation (sheesh: “PCE core”) has risen 0.2% for two months in a row, an annual tend way above 2% target, but the Q4 GDP deflator underperformed at 1.8%. The all-important employment report next Friday will clarify.

On the political front, perhaps some background unease in markets from the overall spectacle, and the Democratic left competing with the Tea Party to annoy the center. But the only direct effect on markets this week was relief at extending the China negotiations and dropping the threat of 25% tariffs.

So, back away from all of that and explore the Fed’s predicament. For once it has only one thing to worry about: inflation. On other fronts, perhaps its greatest success has been run-proofing the banking system. The web-and-Street screeching about debt and new credit weakness and 2008 all over again and “quantitative tightening”… irresponsible nonsense designed to attract eyeballs or customers.

And the Fed’s inflation hazard today may be the least in a long lifetime, up or down. Inflation in the US could hardly be more peaceful, if resistant to moving to 2% or a little above. The Fed’s only concern is two-sided as usual: don’t overstimulate an economy doing well, and don’t overdo the withdrawal of stimulus. In December the Fed flipped from A to B.

So, what are the Fed’s tools to forecast inflation, and how has been the track record? Start with two kinds of inflation: supply shock versus wage-price. The triggers for the horrifying inflation in the 1970s were the multiple ramps in the price of oil from $3 to $35, which produced a dreaded “wage-price spiral.” Not repeated since, no matter what oil has done, and not necessarily because of wisdom at the Fed. Economies change.

The routine sort of inflation which worries all central banks: the “Phillips curve” kind in which too-low unemployment induces competition among employers to overpay workers. Few theories so dominant in the 20th Century have been so discredited in the 21st. The Phillips proposition has some truth, of course, but in the last twenty years has had little predictive power.

Additional trouble with inflation theory: the Bank of Japan and the European Central Bank have each tried to induce inflation and failed. The classical theory for inflation cause: “too much money chasing too few goods and services.” Yet Keynes in 1936 identified a terminal flaw: the “liquidity trap,” in which money-creation can push on a string.

All of which leaves the Fed with one forward-looking indicator: “expectations.” Three aspects are in active use: from the bond market, from surveys, and looking out the window. The bond market indicators involve fancy interpretations of the spread between inflation-protected securities and fixed-rate ones, and term premia, and yield curve behavior. All have circular aspects and can flash warnings caused by something else. Surveys? Marketing people design cars based on surveys, but should we expect civilians to be reliable indicators of future inflation?

Maybe. Together with looking out the window at the behavior of businesses, maybe. In the 1970s the expectation of future inflation was embedded everywhere: employees expected raises to pay higher prices, and individuals and businesses accelerated purchases before prices went up. We spoke of “breaking expectations,” which Paul Volcker did, and broke a lot else besides. Those expectations contributed to ongoing inflation, but were more effect than cause. More important: those expectations were not predictive on the way up, and worse on inflation’s way down. We still labor today, re-fighting the last-war 1970s.

New theory holds that long experience with low inflation becomes an inflation-capping expectation. The thought makes some sense, and in the era of falling and low inflation (at least the last 30 years) the Fed has spoken of “well-anchored expectations.” Again I am more impressed with effect, not cause.

That whole, old set of theories brings to mind the struggle of today’s cosmologists. We can measure the effects of “dark matter,” but cannot find it, similarly “dark energy.”

We are in better shape in economics. We can look out the window. In the 1970s US labor had little overseas competition, energy production and consumption were inelastic to demand, credit was grossly underpriced, and global substitution of goods and services at lower prices moved at horse and buggy pace. Every component today is reversed. We have moved from a world vulnerable to inflation to a resistant world.

But we don’t know how durably resistant. And we don’t have tidy theories like Phillips and the neutral rate of interest with which to frame policy.

Thus the Fed’s open-ended stand-down at the low end of neutral calculations could not be more appropriate.

The US 10-year T-note is in Neverneverland. In the chart two years back, just floating in space between long-term highs and lows until something happens: 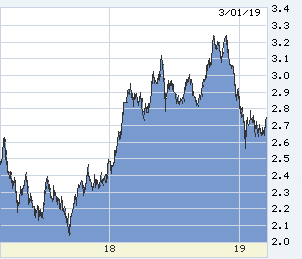 The two-year T-note is the same, priced for a no-change Fed through 2019: 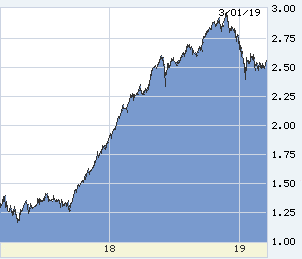 “Inflation resistant”? A chart of nominal prices for oil, not inflation-adjusted begs this observation: big oil shocks after 2000 had no particular effect on inflation: 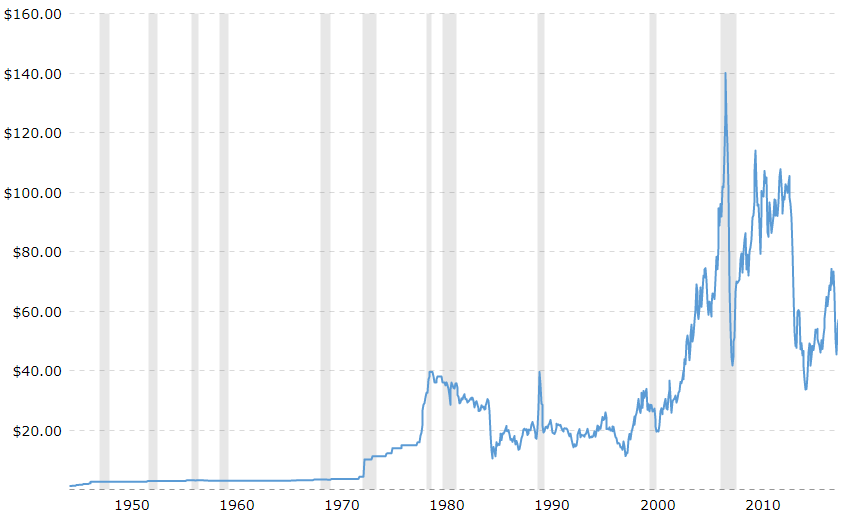 The Atlanta Fed’s last estimate of Q4 GDP, just last week was way under the first official one yesterday: 1.8% versus 2.6%. Downward revision ahead, or hope that Atlanta has lost its marbles? Below is Atlanta’s first estimate of Q1 2019, now two-thirds over, the green dot at bottom right a forecast for 0.3% growth: 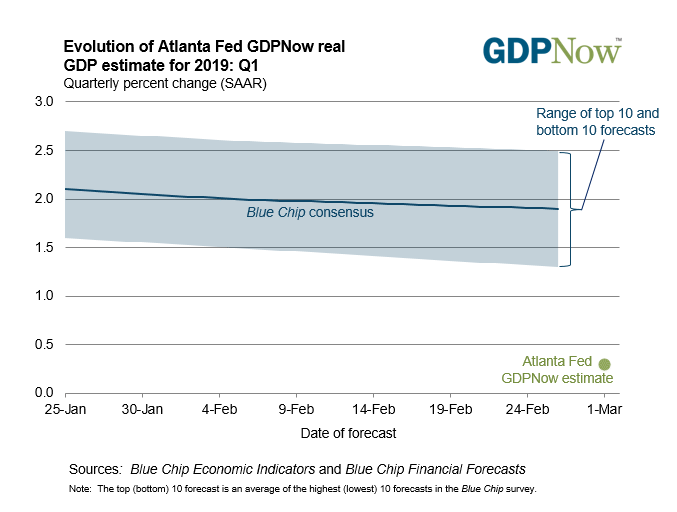 It is concerning that Atlanta now agrees with the ECRI, two totally different methodologies: Atlanta uses actual components of GDP, while ECRI rests on all sorts of market indicators. The good news: the ECRI has stopped going down: 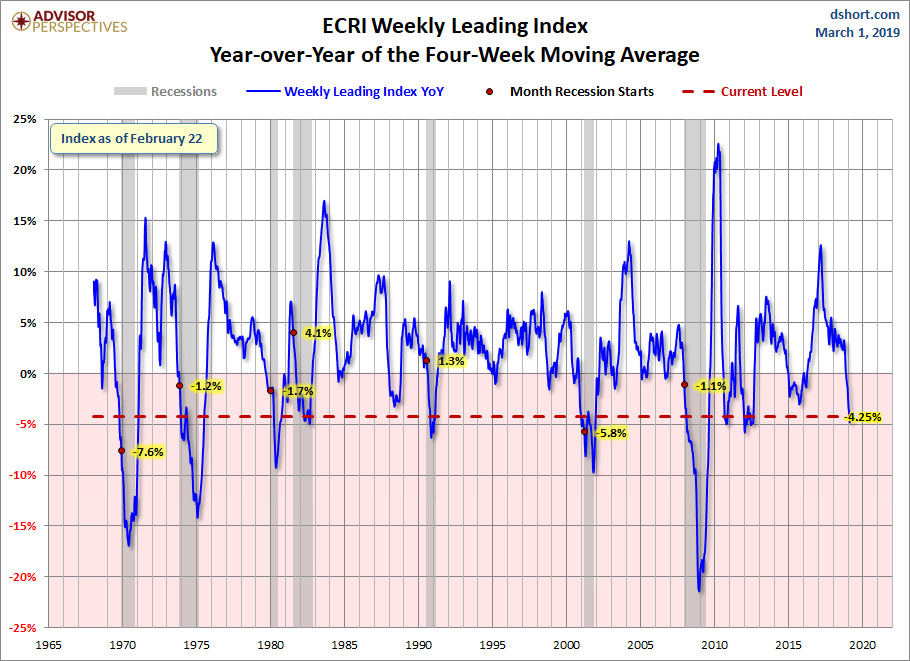