Exactly. The left-wing branch of the Tea Party has run Amazon out of NYC. Take your rotten 25,000 jobs and $2 billion in annual tax revenue and shove it.

Oh… that other emergency?

Market reactions: the Dow is up 324 points this morning, now barely one thousand below its all-time high and up four thousand from the Christmas Eve oops-a-daisy.

The US 10-year Treasury, the global barometer of anxiety, since the Fed’s open-pause epiphany at its January 30 meeting has traded between 2.72% and 2.63%, today 2.66% and essentially unchanged from pre-emergency yesterday to emergency today. Mortgages are undisturbed, a little north of 4.50%.

In one sense it is reasonable for markets not to care about the other state of emergency, the border one. The only thing emergent on our southern border in the last forty years is today’s lower rate of illegal immigration. The constitutional question is important, but a civics lesson, not economics. Under the National Emergency Act, Congress can cancel any declaration by any president. Without a majority in the Senate, Democrats will go to the courts, which avoid parenting between branches and are likely to say that if Congress feels that its Article I appropriation authority has been trespassed, then vote so.

To undertake this adventure on Presidents Day weekend will add to future remembrances. The courts must respect any president’s sense of emergency, but should we set a precedent for declaring an emergency when there is not one, entirely to circumvent a divided Congress which has specifically declined the president’s emergency intentions?

Some days economics and markets are a trial or a bore. Today, a relief.

In the aftermath of the Fed’s pause or cycle-stop we have received economic data delayed by the shutdown from the period in which the economy was hit by the shutdown, the stock market dive, and the cumulative effect of three years of Fed hikes. Last week we got January job numbers far better than anyone expected, and yesterday December retail sales far worse, the most-sharp decline since 2009. On Tuesday the NFIB survey of small business in January, not delayed but possibly shutdown-effected continued its straight-line drop. And housing data (non-delayed) is slipping.

One other presidential matter afflicting markets, and masking market response to economic data: any news of trade resolution with China, stocks and rates go up. News of negotiations going badly, stocks down and rates down. Markets do not care what kind of deal or if any deal; markets wish only for an end to tariffs and trade war.

Another development possibly affecting the economy: the first year of tax returns under the new law. Some consumers are pleased by tax relief, others annoyed by increases. The benefit to small business is unclear, depending on the aggressiveness of the preparer and interpretation of thousands of pages of IRS rules interpreting the worst tax bill in the history of taxes. (Lower tax revenue than expected is common to all tax bills, and the huge increase in the budget deficit has little effect in a world elbowing to buy our Treasurys for safety.)

So throw all of that into a Martini shaker and try to see bottom.

There is a chance that the Fed has overdone its hikes, and an economic rollover has commenced. A thin chance, but it’s there, especially as the rest of the world is soggy. The most clear of all the markers is housing. Going back 50 years, a rise in mortgage rates of two percentage points from cycle bottom to top, and we get a recession. The jump last fall to 5.25% was close, and a two-point rise from 3.50% is a bigger proportion than any prior.

Next to watch: the consumer. That’s why the December retail sales flop is so jarring. The strength in reports since December was in employment, but jobs are always a lagging indicator of rollover (and recovery).

Next: watch rates themselves, especially long-term ones. A big move is already rearview, the 10-year note way down from the October-November gorgeous double-top at 3.23%. 10s today are only 0.16% above the Fed’s cost of money, and the 30-year Treasury back under 3.00%.

The odds that this pattern leads to recession are low. Our economy today does not have the credit excesses which turn slow spots into contractions. However, no matter what: there is not the slightest whiff of inflation in any of the data, no reason for the Fed to un-pause.

Happy holiday! The next election is less than twenty-one months away.

The 10-year T-note in the last year. In the last two weeks could not be quieter: 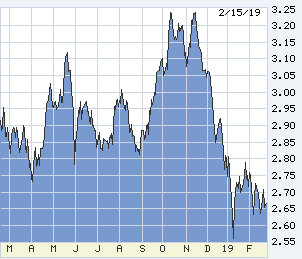 And same for the Fed-sensitive 2-year Treasury, still forecasting no hikes this year: 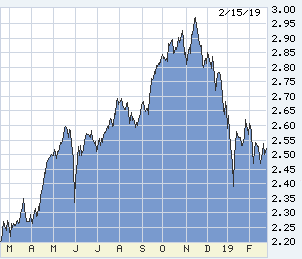 The NFIB weakness may be misleading. The index drop for January is broadly based, but the historical chart is odd. At the tail end it is weak, but from what conditions? In the 44-year history of this survey there has never been an election spike like 2016. The NFIB members are appropriately conservative, but the reaction to Trump’s elevation was wild — compare to Reagan in ’80 for example, not even a wrinkle in the chart. So, maybe the new survey has returned to the excellent economic barometer which it used to be and indicating slowdown, or maybe just unwinding some Trump euphoria: 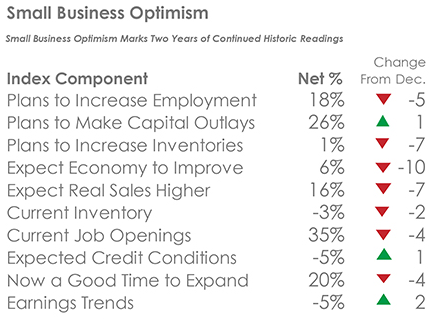 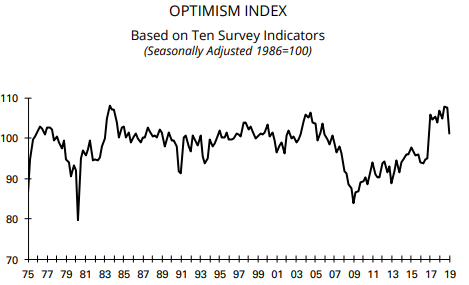 Most cautionary, the ECRI this week is still falling: 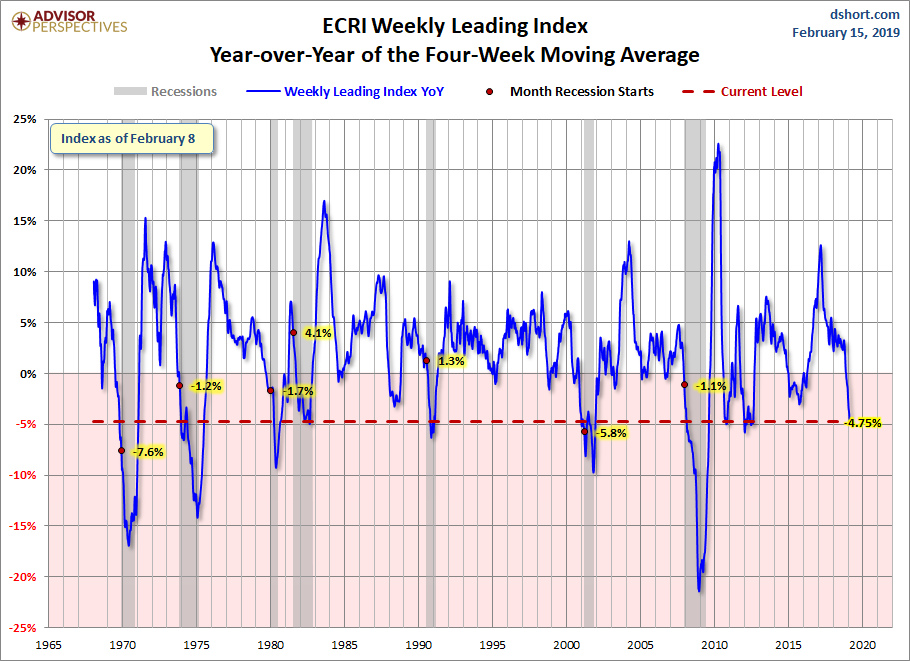