Not: yield curve and recession. The 10-year T-note topped at 3.23% one month ago, so high mostly because of misunderstanding chair Powell’s “long way from neutral.” At first slowly and then quickly after his corrective last week 10s have fallen to 2.86% today, reasonably centered in the old range which held from February to October.

The Fed-predictive 2-year has moved little through the whole episode. It did peak at 2.97% last month, Powell-confused along with everybody else, and is now 2.73%. An “inversion” would be the 10s yield falling below 2s. Which has not happened, and even if it did, 10s are pulled down by incredibly low yields overseas, not recession risk here. German 10s are 0.252% today, the low of 2018 (see below). US 10s are also pulled down by the absence of inflation risk, the Fed’s favorite measure falling back below 2% and no chance to rise after oil prices collapsed.

Not to worry about stocks, either. We can all go bonkers trying to find rational behavior in stocks. Stick with the obvious. After an unbroken upward run since the 2016 election, the market in Dow terms double-topped Jan-Oct (26,800), not a pleasant sign, destabilized into wockety-tong volatility and a springtime low of 23,500, and that’s the danger point. Below there, a little support at 22K, and 20.5K, but nothing solid until 18K. At the moment the Dow is off 566 to 24.4K, still well above the danger point.

The Fed wouldn’t let stocks unwind to 18,000, would it? The hell it wouldn’t. Greenspan, Bernanke, and Yellen were all accused of supporting the market. Overvalued assets are a risk in themselves. Stocks are justifiably worried about some tough things (below), but also pedestrian ones: the budget binge will stop, as will the giveaway tax cut resulting in share buybacks. It would take a huge dive to create recession risk.

Don’t worry about recession, not at the moment. The twin ISM surveys for November are on fire: manufacturing at 59.3, two points above expectation, and the service sector 60.7 a point-and-a-half above forecast. Job growth last month “slowed” to 155,000, almost double the Fed’s long-term tolerance. The “slowing growth” mob points to housing, which isn’t really slowing, just has no land on which to put new ones.

Do worry a little tiny bit about housing and mortgage rates. A rise above 5.50% by historical measure would crater housing — two points above the previous low. But we peaked at 5.125%, now roughly 5.00%. A marker there! In the last month 10s have dropped .37%, but mortgages barely .10%. The two should move in tandem. Except…

Worry overseas. An international “flight to quality” is characterized by a run of panicked cash to Treasurys, not to our weird MBS. Hence today’s pattern. If 10s stay down here, mortgages will slowly follow, but the drop in 10s is not because of the Fed, or stocks, or recession. The drop has come from worry overseas.

German 10s are approaching all-time lows because the EU project is falling apart. France is failing internally, and ex-Merkel Germany is suddenly a dead weight. A Very Senior UK banker wrote to me this week, explaining that the EU’s resistance to Brexit is not about trade, or rules, or immigration, all easily settled. Resistance is an EU panic that others will escape if the UK does: Poland and the eastern edge, and an Italian collapse would be fatal to the euro currency as well. Thus to stop Brexit the EU has played a death card, the one issue on which the UK cannot concede or negotiate, the border between Ireland and Northern Ireland, the worst ethnic conflict in the hemisphere outside of Palestine.

Ireland is part of the EU. The North is part of the UK. Thus an EU border. The EU insists that the UK concede sovereign control of its border. The Prime Minister attempted to conceal a concession and was caught out, and chaos may follow the December 11 vote.

Do worry about China. We have a lot of relationship work to do, but beginning and continuing by humiliating China in public is not a good idea. The yuan is falling toward 7/dollar despite energetic efforts by China to support the yuan, falling because locals are trying to get their money out in advance of tariffs, economic trouble, and political instability. Buy Treasurys. And Russia and North Korea are festering. Buy Treasurys.

All of that accounts for the flight-to-quality pattern, Treasury rally and MBS fizzle. What about risks here at home?

Fantasizing this week (I confess, gin was involved), the image of Mel Brooks appeared before me, hard at work on a new script for “The Godfather.” Plucking the best from “Blazing Saddles” (Governor Lepetomane), “Young Frankenstein” (the Monster), and “The Producers” (Max Bialystok), the Don of the family in “New Godfather” is an aging and incompetent but determined mobster in the middle stages of dementia.

“I offered him a deal he couldn’t refuse.” Great, Boss — what’s in it? “The greatest deal ever done.” Boss, when does it happen? “Oh, he’ll remember.” How will we know? “Know what?”

Many of us are compelled to watch news. In financial markets it is mandatory. One approach to dealing with Donald Trump in his second year: ignore him. Troublesome noise, but noise. Get a tax cut, a couple of our-team justices, ignore everything else. Here at home, we can survive anything.

But, overseas…? John Kelly may resign as Chief of Staff any minute. All of the other adults have been run off: Cohn, Tillerson, and McMaster. Or escaped: Haley, replaced at the UN today by a totally unqualified taking-head from Fox News. Buffers are gone: Porter and Hicks. The key foreign policy people (Bolton, Pompeo, Navarro, and Lighthizer) were previously the most extreme re-meat pitchers found on the WSJ Op-Ed — so extreme that the WSJ has not found replacements.

If you think you’re the Capo di tutti capi, a hit on another Don once in a while is necessary to remind the others who is who, and fun. But, get your way often enough and long enough, and you might forget that the other families can hit back.

Buy Treasurys. For the moment. Maybe by next week, ignoring will work again.

The US 10-year T-note, three years back, showing the election burst, and then the one following the tax cuts and spending splurge. To get real mortgage improvement 10s need to break 2.75%, and we might if enough goes right (Fed stop) and wrong (see above). 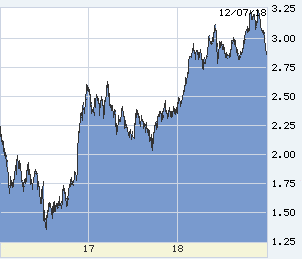 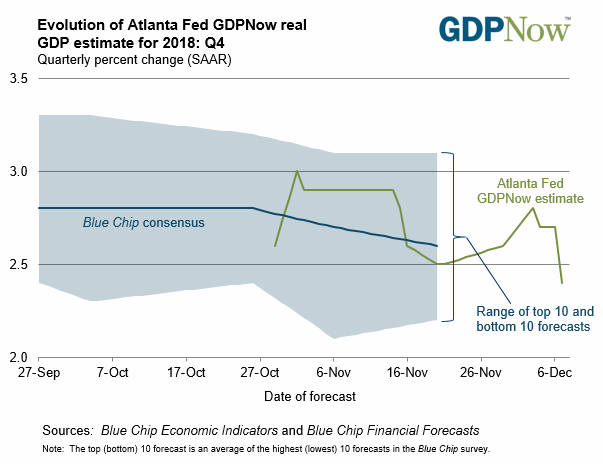 The Chicago Fed sees no change at all, happy, happy:

The ECRI has fallen near recession alarm. Three snapshots from three reliable sources, each describing a different nation: