Stripped of technical argle-bargle and on-the-one-hand: the US economy is fine. The outside world is not.

US wages are still suppressed, but it’s not a sign of economic roll-over. The Inspector Clouseaus at the Fed continue to expect record-low unemployment to create wage pressure, as they did when unemployment fell below 6%, then 5%, and now 4% headed below 3.5%. These bright, serious and caring Inspectors seem unable to look outside of the historical pattern to international wage (and price) competition assisted by unprecedented internet discovery and transparency.

US housing is slowing by some measures, but not in pre-recession pattern. More on that below.

The run up was assisted by the Fed (also ECB and BOJ), globalization (trade growing faster than global GDP), exuberance at Republicans in power and their tax-cut-and-spend, and relative global peace and political stability. All of that assistance is faltering now.

The newest news from overseas has changed the daily pattern: stocks up on news of US retreat from tariffs, down on tariff action. In the last couple of days China has made astounding concessions on trade. Not remarkable in content, the concessions long overdue, but in form: kneeling before a graceless frontal assault. Despite today’s additional concessions the Dow is off 400+, just 600 points above the danger level at 23,500.

What canceled the good news? Euro-chaos, both political and economic, from Brexit to Italy, and from France to the ECB retiring from stimulus. Poor Theresa May spent two years negotiating with Brussels flunkies and this week finally appealed to the decision-makers, for whom preserving the EU and euro fantasy by UK imprisonment is more precious than dealing with the EU-euro reality. And China, which has lost control of fantasy-based economic reports, its slowing now clear, and also clear that efforts at debt reform have failed — perhaps the reason for humiliating concessions.

Please do not take fright! We and the world have been here before, and during the Great Globalizing. The currency crises in 1998 got Greenspan, Rubin, and Summers on the cover of Time as the “committee to save the world.” The Fed cut the cost of money from 5.50% to 4.75%, fearful that the “Asian Contagion” would overtake us as well. Instead that rate cut was unnecessary, money flooded here for safety, and led to the hysterical stock market top. The Fed at the moment could not be more nervous, and should be, but to its credit will hike next week. Money is already cascading into the US, to bonds not stocks, the 10-year T-note holding near 2.90% despite the hike(s) to come.

How insulated can we be against trouble overseas? Most important: we are the least reliant on exports of any major nation. Trouble overseas tends to push prices down, removes inflation pressure, and even stimulates the US. So, why do stocks not see that? Because sixty-something percent of their earnings are derived overseas.

But, a thump in stocks must hurt something…? Some sort of reverse-wealth effect?

Now housing. The current cycle, during the longest economic expansion in US history has been completely anomalous, unlike any on record. Mortgage credit has not gotten easier, hence today’s owners are the most resilient on record. Partly because of tight credit, but mostly because of land exhaustion near urban areas we do not have a new-home overbuild, previously inconceivable, ten years into an expansion. (Want a loan for a small subdivision? Just try.) Home prices (really the land under them) nationally have risen two or three times as fast as incomes, but current incomes, ignoring purchasing power accumulated during the previous bust.

Prices rising that fast, sooner or later should slow down. Sooner in land-plentiful markets where there is some overbuilding (Dallas, Phoenix, Las Vegas…), also sooner in tech-happy zero-land markets in which prices have risen the most (San Francisco, Seattle, Denver…). Other markers of a slowdown: Zillow has entered the home-buyout business. No better indicator than that, except this one: the WSJ last week ran a story saying the housing outlook was “darkening” because house-flippers are in retreat. An alternate theory: distressed sellers have been worked off, loan delinquencies are all-time low, and how are you going to find something to flip during all-time lows in listings for sale?

One housing caution. “Accumulated purchasing power” includes wealth from stocks. I have never seen data on stock-money percolating into housing, but I see it at my desk every day. If not directly, a buyer hitting the IPO or option gong, then many buyers emboldened by the tripling of their 401Ks.

The softness in home-price appreciation has been sudden this year, happening in several markets at the same time. Two coincidences: mortgage rates touched 5.00%, more shock than affordability, and at about the same time this fall the stock market entered the screaming volatility bejabbers. Hunch: housing was due to slow, unbalanced, and got a shove from behind by both rates and stocks, the latter the more powerful.

But not the sort of housing-caused recession of the past.

Neither the 10-year T-note nor the Fed-predicting 2-year are doing anything. The chart fun is stocks. At top the long run up from recession, accelerating after the 2016 election; then the double-top in 2018; and increasing volatility in the last six months then going haywire altogether in the last 90 days:

Not intending to scare anyone, here is the Dow chart since 1990. Yes, an epic run, but a perfect illustration of the growth and profit explosion resulting from the globalization which began in 1990. Dislocating, wage suppressing, unruly, tech-frothy, but the greatest wealth creation in human history: 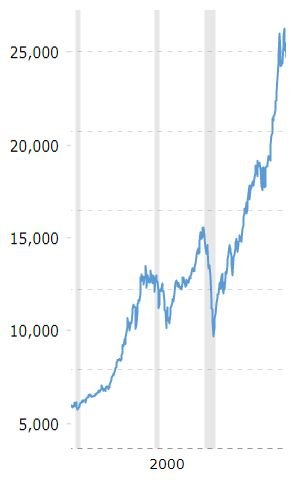