The Shutdown is crimping the collection and release of US economic data, but the numbers dribbling out show no particular change. Interest rates are steady, maybe going lower as the threats of overheating and inflation fade.

The Shutdown may be ending temporarily as this piece goes to press.

Given the shortage of US data, and the evident excellence of US self-governance, let us look overseas and critique the failings of others.

In a very old story, Captain Cook discovered a Pacific island and claimed it for George III. The island king objected, demanding an English oak throne in exchange for ceding his realm. Two years later Cook returned with the throne, deal done. The island king instructed his people to build a proper throne room, and meantime to put the thing in the attic of his hut. That night the throne crashed through the ceiling and squashed the king dead.

The moral of the story: people who live in grass houses should not stow thrones.

Nevertheless, consider Japan, China, and Europe. Any thinking about the US economy must take into account spillovers from over there to here, and the word “spillback” highjacked from auto traffic engineering describes actions taken here which have unintended consequences over there which spill back here.

Japan has become a shell economy with imaginary internal underpinnings, blind faith in the yen and banks. Its population is shrinking, its workforce shrinking faster, and its aging population growing even faster and consuming more resources. It is home to giant global enterprises, but their wealth-building is intrinsic to themselves, not Japan’s domestic economy. Japan’s stock market is worth about half its 1989 peak. Its troubles are fixable by encouraging immigration, but Japan allows only non-Japanese guest workers. Until a demographic fix, Japan cannot be an engine of global inflation.

China is difficult to figure out for several reasons. Its books are cooked. The Party will intervene in any market unpleasantness no matter the long-term cost. The yuan is still not a market currency. Its banks and debt markets are official fictions with none of the predictability of Western courts, contracts, default, or bankruptcy.

China is truly a meritocracy, not a crony state like Russia. Very bright, well-educated people experienced in the West are in charge. But they appear shackled by four things.  First, the leadership has been unable to reform the state-owned enterprises (SOE), as the Party cannot bear the loss of income and power. Second, China is the worst debt-junkie of all time, state power preventing the downsides. This rickety system is failing because a new unit of debt produces less and less economic growth, and debt is piling up faster than the economy is growing. Third, China’s demographics are on a Japan slope. Last year the fewest babies were born there since 1961; on trend its population will begin to fall in eight years. “One child” ended five years ago, but affluence is the force in play. In every nation where children are no longer necessary to provide for elders, the birth rate has crashed.

The fourth and undermining China element: top-down control, which China is trying to export via the indentured servitude of “belt and road.”  Excessive control will wreck the place one of two ways: slowly or quickly. Once disagreement is forbidden and market feedback disallowed, the system will fail to self-correct. The fix lies in loosening up, but leadership and citizens fear instability. China’s growth is now slowing way below plan, and there may not be anything that China can do about it. Another non-source of inflation, possibly exporting deflation.

Europe. Its new slowdown is a mystery to the one-Europe believers, who are also making it so hard for the UK to negotiate economic participation without conceding sovereignty. Europe’s problem is the same as it has been since the euro currency was created twenty years ago: hopelessly incompatible national productivity locked in one currency. Germany’s GDP is about 28% of the total. It runs a budget surplus of 3% of GDP (the only surplus in Europe), paying down debt, and runs the largest trade surplus of any nation in the world, 7.5% of GDP. The euro is absurdly undervalued for Germany and equally overvalued for the others, who cling to German money in their wallets like heroin.

The solutions have not changed: either the rest of Europe becomes German (which would wreck the global economy), or Germans become semi-Italian, flipping to budget and trade deficits allowing the others to breathe. Macron double-talks his expectation that Germany will pick up the tab while the Germans drive the gilet jaunes into the streets.

Europe will not be a source of global inflation.

The Fed has a hard time looking outward, like most institutions accustomed to its ways. More people there all the time are asking the right question: why have our models overestimated the risk of inflation? The answer screams back: global trade and IT have changed the game, and we do not have a global model, only the IMF’s damp finger raised into a slowing breeze. The Fed does seem to understand the risk of further hikes.

Back to stowing thrones. In modern times it is most unusual for the British monarch to speak on political matters, yet when she does Britons respect her guidance. Elizabeth II today: “I for one prefer the tried and tested recipes, like speaking well of each other and respecting different points of view; coming together to seek out the common ground; and never losing sight of the bigger picture." Everyone in the UK knows that she was speaking about Brexit, not recommending Leave or Remain but that the matter should be resolved and in a manner reflecting well on Britain.

The US 10-year has settled in an indeterminate spot, waiting for something to happen, the chart 10 years back: 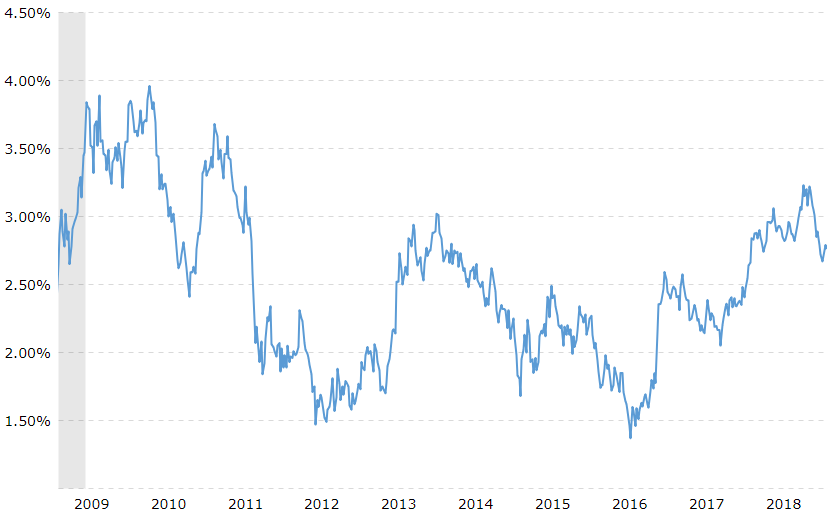 Things here might improve if we could borrow the hat. Imagine if Trump, Pelosi, Schumer, and McConnell were allowed to speak only while wearing this hat: 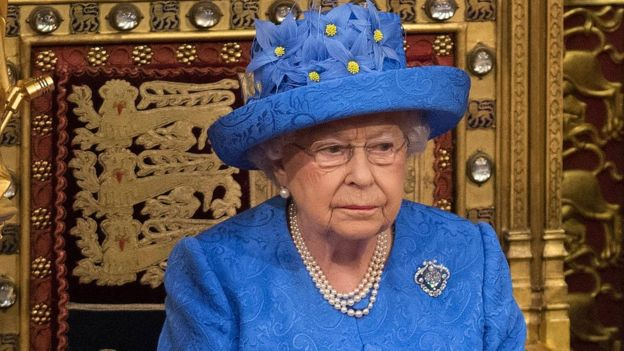