Markets are quiet, most of the country with any sense on vacation near water, and anyway waiting for something to happen (Iran may solve that problem). Which provides a moment to back away from the immediate scene and to examine the overall, odd situation, and the making of Fed policy at its meeting in ten days.

US domestic data still do not support the Fed’s evident desire to cut the cost of money. Retail sales in June were perky, excluding cars and gasoline up .7%. Why exclude two soft sectors? Because their softness has nothing to do with economic growth. We have sold a gazillion cars in the last several years. We may get autonomous vehicles, but not even the AI magicians have figured out how to ride in two of them at the same time.

Housing is just fine, although non-housing people fret about low volumes. We do not build as many homes as we used to because we are short of land, and to re-zone to higher density requires years of political combat. We don’t re-sell as many as we might because there are so few available to move to, and we don’t move much anyway, only half as often as the twenty years, WW II to 1965.

Moving farther out, for the wide view… We watch the Fed not just because of what it might do, but to gather its wisdom about the state of the economy. The Fed’s public discussion of whether or not to cut the cost of money on July 31 and by how much is vastly more important as a judgment of the global economy than any change to interest rates.

In normal times the Fed, the Treasury, the Congress, and White House are on similar pages — bickering of course for policy change, but in character and based on some semblance of economic theory. One prior exception, although not as extreme as today: Paul Volcker determined to crush inflation by inflicting very high interest rates while the Reagan people wanted stimulus by huge cuts in taxes.

The contradictions among federal policy makers today, and the characters involved is closer to the Marx Brothers than the 1980s. We are in better shape by far than it looks, so do enjoy this week’s slapstick. We are all human….

Congress winks bipartisan backing of the Fed, but half of Congress cannot say so for fear of public disagreement with the White House. The president in theory is aligned with the most conservative 40% of the nation, yet wants tariff barriers, the Fed to cut rates deeply, and the Treasury to weaken the dollar — all three antithetical to conservatism, and to the most conservative people at the Fed.

The Fed’s chair molds and publicly describes the Fed consensus, not mere majority. “The Fed” is twelve presidents of regional Fed branches who are selected by local boards of directors, but the true center of power is the seven governors appointed by presidents and confirmed by Congress — today only five of those seated, including the chair.

All seventeen of these people offer public opinions. Chair Powell since May has been concerned for the global economy because of the tariff-induced trade war. The other four governors are with him as is standard. Powell’s cut-signals have been so strong that many suspect a half-percent cut in ten days.

The regional Fed presidents are the unruly aspect of the Fed. The three most conservative (Harker, Philadelphia; Mester, Cleveland; George, K.C.) have made very clear their opposition to any cut. These three are able people, but their one-way bias has been entrenched. Bullard at St. Louis has been noisy in advocating big cuts, but he tends toward self-important noise and weathervanes to extremes. The other noisy big-cut-advocate is Kashkari at Minneapolis, a Goldman graduate, then in charge of TARP, probably the most unpopular federal program ever, then an absurd candidate for governor of California. The regional Fed presidents often include a few unlikely or unfortunate personalities, but Kashkari is a record-setter for inappropriate.

Interest rate decisions are made by the Fed’s Open Market Committee (FOMC), so-called because the Fed manipulates interest rates by buying and selling securities. All of the governors always have a vote, as does the president of the New York Fed because of its crucial duty to police financial markets. Four others rotate in and out, this year George the hawk, Bullard the momentary dove, and two able and wise: Evans at Chicago in favor of two cuts by year-end, and Rosengren at Boston also concerned for the global economy.

The cut is in the bag, the only question if George will dissent. The cut is highly likely to be .25%, the best evidence from perhaps the most able person in Fed leadership, Kaplan at Dallas, not an FOMC voter this year. To the WSJ this week: the yield curve inversion “would make you consider at least a tactical adjustment — not a change in strategy, not the beginning of a rate-cutting cycle… modest, restrained, a limited move.” Kaplan looks uneasy with any cuts. Me, too. I assume that the sensible people favoring multiple cuts are worried about the awful data coming out of China and likely persistent tariffs, although not yet affecting the US economy.

After that dry rundown, enter comedy. John Williams is the president of the NY Fed, and to me a perfect example of the Peter Principle, an able academic promoted far beyond his capacity for judgment. He began at the DC Fed as an economist in 1994, then to the SF Fed in 2002, became its EVP of research, protegee of its president Janet Yellen, kicked upstairs to her job in 2011 when she became a Fed governor (then chair), and somehow angled the NY Fed job last year.

Oh, wish that Williams were silent Harpo! Instead he is “peerlessly cheesy” Zeppo. In an economic time requiring the best thinking from Fed leadership, Williams has yet to offer any. Nevertheless, yesterday Williams forged ahead. His speech indicated deep concern for the “zero lower bound” (ZLB), the risk to all central banks as rates approach zero and cannot usefully be cut further. He said, “Don’t keep your powder dry — that is, move more quickly to add monetary stimulus than you otherwise might.” Markets moved! Williams is also vice-chair of the FOMC, but that is an honorific (news reports called him “Fed vice chair” which he is not; the two real vice chairs are governors Clarida and Quarles).

Williams speech was such hysterical dovey-dovey that the NY Fed staff yesterday evening tried to walk it back, and Williams this morning attempted to cancel himself. A lot of money was lost reversing trades. With luck soon Williams will be appointed the harmless head of a charitable foundation somewhere.

Here we have the Williams’ Rally-Crash, the Fed-sensitive 2-year T-note in just the last week, Williams speaking on the afternoon of the 18th: 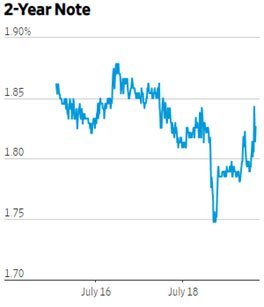 The 10-year T-note in the last year. A whole lot of people are betting that the pause of the last several weeks is just another break on the way down, like the other two in late winter and early spring. Prudence says that markets are now priced for two .25% cuts by year-end, and that’s what we will get and no more: 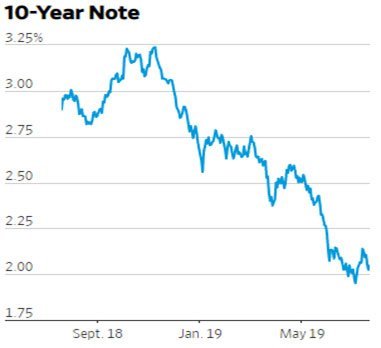 The great “moving American” no longer does. US migration today is limited to the mass evacuation of the countryside to cities and IT jobs. The lack of movement otherwise has political consequences: isolated polities grow apart. (The data void in the mid-‘70s: the census did not ask): 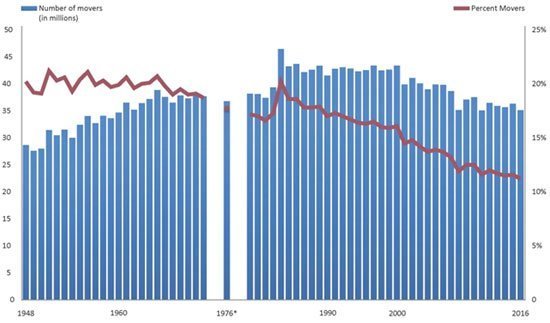 The ECRI (Economic Cycle Research Institute) has perhaps the best long-term forecasting history outside the Fed itself. It has rolled out a simple chart illustrating a brilliant insight: when global trade grows faster than global GDP, globalization and its extraordinary wealth-creation expand. And vice-versa. Now, vice-versa, a good description of the Fed’s fears. 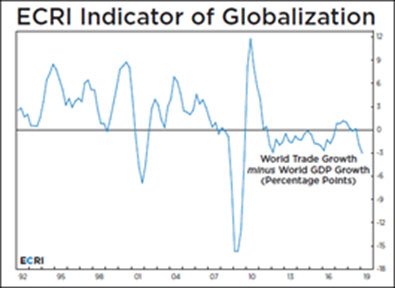 And the ECRI measure of the US economy, improving from its winter low: 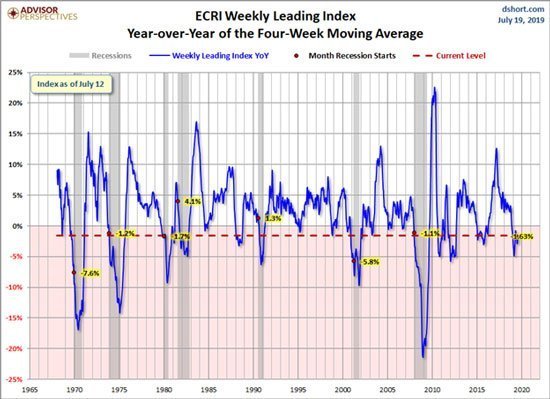