For the time being, US financial news is good. Stocks are holding their recovery nicely, the 10-year T-note has made it five-straight weeks in a range 2.75%-2.65%, keeping mortgages just above 4.50%.

US economic data is not quite so happy. Orders for durable goods, a proxy for business capital investment dropped .7% in December, and revised down to minus 1.0% for November. In a more current report, sales of existing homes in January fell 8.4% year-over-year, and inventory for sale rose 1.8%. The apparent softness may be a natural transition to a slower or flattening pace of price increases after a long and happy run up, or may be something darker.

Overseas data is ugly. China is in a slowdown which not even its magicians can pull out of the hat. Europe is in trouble again: despite the ECB policy rate still below zero, the ECB will have to extend and expand its direct supply of funds to European banks. This operation is the equivalent of buying long-term bonds issued by banks themselves, which no market would buy. The creditworthiness of European banks and several member nations is still an official fiction and not improving. The German 10-year pays 0.097%, and the Italian 2.857% — and if the ECB were not the de facto guarantor of the EU, there would be no market at all for Italian bonds.

Markets are on edge, here and everywhere. Not necessarily bad edge, just edge. On the next two Fridays we’ll get new economic reports from February, and markets are sensitive to the prospects for deeper trade war with China and Europe.

For civilians trying to anticipate, watch one thing: the US 10-year T-note. If events conspire to push its yield down below 2.50%, the top of the Fed’s current overnight range, look out below. The Fed will cut and perhaps repeatedly. Conversely, if 10s hold or rise then things will be okay.

The Fed is on edge, too. I have sympathy for its predicament: as an institution and fine people in leadership it’s not easy to ask itself, “Do we know what we are doing?”

Not just the current pause-hike-or-cut, but the whole foundation for inflation-fighting, and unique among central banks the simultaneous duty to maintain high employment.

Chair Powell will make his first of two annual reports to Congress next week. I hope that he has rehearsed the projection of impenetrable fog, but he’s not that kind of guy. He’s a clear thinker and speaker, dangerous when on stage, extemporaneous and under pressure. Misspeaking is probable.

Today at a big conference in New York several Fed officials are speaking, and three geniuses at the University of Chicago (more Nobels in economics than the Patriots have Super Bowls) have delivered a Very Important Paper. Linked here for masochists: “Prospects for Inflation in a High Pressure Economy: Is the Phillips Curve Dead or is It Just Hibernating?” (The Phillips curve is the graphic proposition that too-low unemployment causes inflation, and too-high causes too-low inflation.)

Its summary tells all: “Our analysis suggests that reports of the death of the Phillips curve may be greatly exaggerated.” Fed speakers today are having a grand time with the analysis, and the poor slobs working in markets could strangle all of them.

Let me explain. Policy makers at the Fed debate economics and policy via mathematics. And, because the future cannot be known, backward-looking math. Hunches are inadmissible, except as cloaked in acceptable math. Chair Powell is the first non-economist to be chair in modern times, and he may change the culture.

Among the flaws in using backlooks to guide current policy: we do not know for sure what is happening now, nor do we know what really happened back then; thus comparisons may have imaginary results. Market people growl at this foolishness: Why not just look out the damned window? Five years ago your math was certain that if unemployment fell below 6.5% we would ignite inflation. Now we’re below 4% and you may have overdone your hikes. You don’t know the full effects today of the hikes you made a year ago. You don’t even know if this is a “high pressure economy!”

Vice chair Clarida, smart and caring announced a new Fed review of policy formation and communication. “The fact that the System is conducting this review does not suggest that we are dissatisfied with the existing policy framework.” Horsefeathers. “Perhaps most significantly, neutral interest rates appear to have fallen in the United States and abroad. Moreover, this global decline in r* is widely expected to persist for years.” And we don’t know why. “Another key development in recent decades is that inflation appears less responsive to resource slack.” Or resource tightness. And from every trading desk on the planet, DU-UH!!

Poor Clarida was also the message-carrier for this spectacular idiocy: the Fed will embark on a first-time-ever series of “Fed Listens” in town-meeting format. Don’t do that. Central banks are at their best as star chambers. Especially when uncertain, shut up. Central Banks are given their fantastic power because we know that we can’t be trusted with money. Do not invite the public, ever, and politicians as rarely as possible. You will be cornered into explaining the Phillips curve consequence: “Too many of you have jobs, and it is our duty to fix that.”

Two of my least-favorite Fed people contributed. John Williams, who got promoted from one Peter Principal level to another, now New York Fed prez said today: “Fed policymakers should not be complacent about the possibility of a resurgence of inflation in the context of a tight labor market. The trade-offs between employment and inflation the Fed faces haven’t fundamentally changed. In summary, the Phillips curve is alive and well.” God Lord, man, look out the window.

Roberta Mester, Cleveland prez earlier this week confirmed her most likely forecast as GDP slowing to 2%-2.5% growth and inflation near 2%, and later in the same speech if that forecast came to pass, then “the Fed funds rate may need to move a bit higher.” For what possible reason?

If the Fed does not stop this public inflation-worry, it can talk the country into recession. I have compassion for all of them, and wish us luck.

The US 10-year T-note, two years back. Just frozen now, waiting on data: 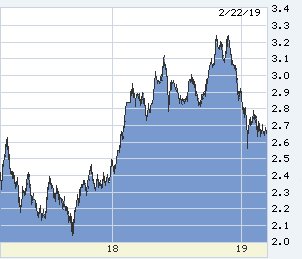 The Fed-predicting 2-year T-note is similarly frozen, but says no Fed move upward for at least a year. And on the edge of tilting to the next move as a cut: 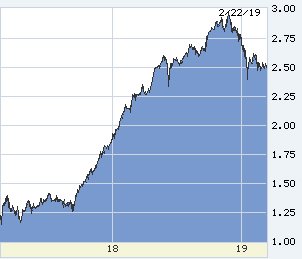 The Atlanta Fed’s forecast backwards to Q4 2018. It will resume forecasting of Q1 2019 when we get the shutdown-delayed actual of Q4. This chart is a dramatic reflection of the weakness in new data from last fall: 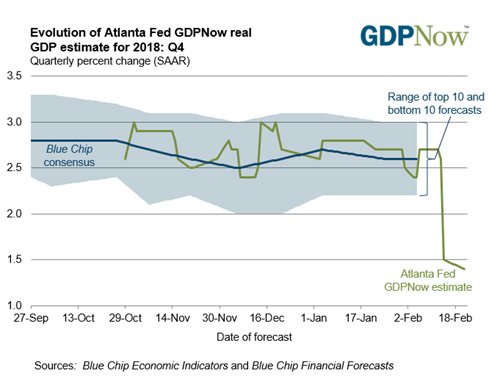 The ECRI… I’ve done a foolish thing by assuming that the ECRI forecast of recession has been an overreaction to the flat yield curve. These are very, very able people, with only one possibly mistaken recession call in 55 years — and that one intercepted by the last round of Fed QE. The ECRI leading index did bottom this week, but in a bad place, below the start of five of the last seven recessions: