It is customary at this time to make predictions for the New Year. After the last few weeks, months, year… a joke, right?

Nope. Nuthin’ to it, much like 2018. Except that any forecast in these years must include craziness. Embrace the goofy and proceed.

2018? One year ago it was routine to see ahead to tax cuts and fiscal stimulus, the Fed in plodding hikes maybe touching a nerve, a vulnerable stock market, and housing feeling higher rates. And if Trump were still in office all year, certainly still Trump.

Predicting the past is so cool.

Guessing at 2019 requires wallowing in the wacko, and there is an approach to that: as important as what happens is to sort those events into sane, and nuts. To sort, back away from the individual events and examine underlying principles.

An overriding preface involves politics. It is impossible to discuss the nation’s financial affairs without exploring political forces, and making value judgments about the sorry, rotten office-holders and occasional heroes. Must be as tough, cold, and critical as possible. However, give that treatment only to officials, not to their supporters! Annoying partisans inhabit both parties, but many more people are uncomfortable with their choices, doing the best they can to balance policy, personalities, and ambiguity.

Begin with stocks, but keep it short because there is so little benefit to studying that market. Today at last, stocks are exhausted and quiet, although odds favor continuing wildness. The principle: once volatility begins, and the bigger the initial shocks, the longer it will take to calm down.

One of the very few useful stock market observations involves “technical” (i.e., chart) “support” — meaning a prolonged period of flat trading, therefore many entities buying and selling in the same price range. A prolonged period of rising prices means that every owner from aunt Alice to CALPERS has a profit, and when prices turn down all are motivated to sell and cash in the profit, urgency rising at each further price drop. Also, during the run up, fewer people dare to sell short, thus that market discipline disappears in favor of drunks.

Corporate earnings matter, as do the Fed and interest rates, but ninety-odd percent of CNBC content is cow byproduct. At the moment in the lead: the notion of “bear markets.” Some market motions have statistical validity, hence algorithms chasing each others’ tails, but leave the animals out of it.

Then the Fed. Why is it okay for wiseguys like me in markets to chew on the Fed, but not the president? Knowledge and skill aside, because of family: two brothers will fight constantly, but if the neighbor kid takes a poke at one brother, both will join to beat the tar out of the not-kin. Presidents also suffer from a skill/power mismatch: only one president since the Fed was founded had a fair understanding of its need to inflict pain (Clinton), but another dozen hurt the economy by demanding an easy Fed.

Trump on Christmas Eve: “The only problem our economy has is the Fed.” The ideal target of all bullies is a victim who can neither escape nor hit back. The Fed has to take all punches in silence (someday Mr. Powell will tell us — if he knows — whether the Fed’s clumsy hawkishness on the 19th was to defend independence), but markets have no such restraint, and more power than any president. James Carville, political advisor in 1993 speaking for Clinton: “I used to think that if there was reincarnation, I wanted to come back as the president or the pope or as a .400 baseball hitter. But now I would like to come back as the bond market. You can intimidate everybody.”

Our economy’s worst problem? This unsustainable linkage: our new $1 trillion annual federal deficit driven by the worst tax law ever passed in structure and timing, and the runaway cost of health care. Prediction: we will not make progress on that in 2019. Duh.

The whole nation one way or another is addled by today’s politics. So, principles again. The most basic necessity for a working democracy: majorities shall not oppress minorities, nor minorities oppress majorities. Today, pro-wall people say that it was a central promise of the 2016 campaign winner. Okay, but 2016 could not have been more narrowly won. A “mandate” is the result of a pasting: FDR in 1932 by 472-59 electoral votes, 42 states to six, and 57.4% to 39.7% in the popular vote. Win like that and you get to have your way. Win by 306-232 electoral, 29-21 states, and lose the popular vote 46.1% to 48.2%, then throwing around your victorious weight will have diminishing return.

Perhaps the deepest principles in Western Democracy, Britain’s gift to Greek and Roman origins, date roughly 800 years ago. Giving thought to them exposes how truly cracked is some of our current circumstance. After the prior millennium the nobility and wealthy grew bold and strong enough to object to the common habits of monarchs to start wars and drain treasuries. Our inheritance: Congress controls the purse strings and declaration of war.

This benighted wall… no president has the right to force Congress to appropriate money for any purpose. Nor the converse, to fail to spend funds appropriated (see Nixon and sequester). Then, Syria. Congress has ceded some war-making powers to the president through legislation and litigation because of the modern need for speed and in semi-war ambiguities. That’s starting wars. I do not know of authority granted to presidents without consultation, unilaterally to stop one. The constitutional guide for treaties and appointments repeatedly requires the advice and consent or ratification of Congress.

The president’s Christmas Day message to the nation: “It’s a disgrace what’s happening in this country. But, other than that, I wish everybody a Merry Christmas.” Well, okay by me, although I might quibble about the cause of the other-than-that.

For 2019, stick with the obvious, which is a safe haven if mistaken. One more principle: in the near term whatever is going on is likely to continue. Nuts will stay nuts. Tariff Man may strike again, unless Congress takes away the toy. Economic weakness overseas will be the biggest issue. The Fed will watch its step.

The US economy will likely slow a bit, but for most folks it’s fat out there. Enjoy!

The 10-year T-note two years back as a matter of chart pattern is ripe for a collapse in yield. Charts miss sometimes. With the Fed committed to rates high enough to slow GDP growth to a sustainable level, 2% or less, long-term rates should stabilize — and rise once the stock market calms down: 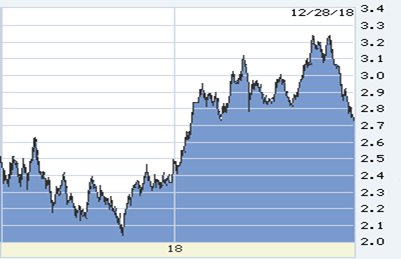 The Fed-sensitive 2-year T-note, also two years back says the Fed is on indefinite hold, although its next move still more likely to be up than down: 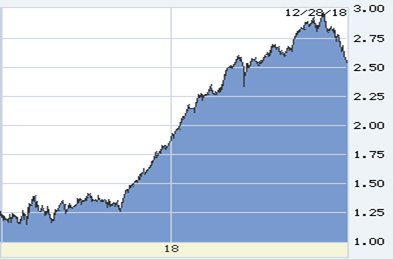 The Atlanta Fed GDP Tracker is the soul of good sense, never predicting beyond 90 days into the future. And in this case predicting the past 90 days, gently slowing: 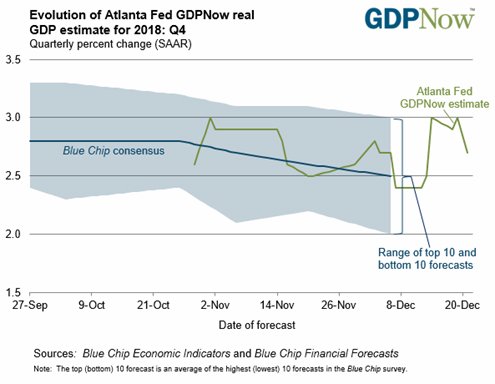 The ECRI is problematic. As smart and reliable as these guys have been for 50 years, now predicting recession (not yet a public “call,” but their chart says so), the algorithm is likely to be distorted by stocks and our flat yield curve, both highly questionable indicators today: 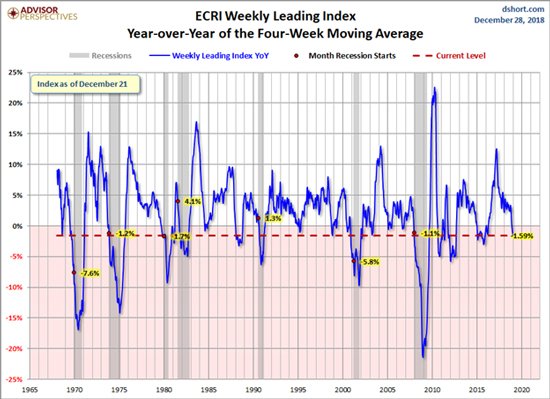