Nothing happened this week.

Oh, the temptation some Friday just to leave it at that. Plenty did happen, of course, but markets are focused on the list of what’s happening that hasn’t quite happened yet.

Market people are consumed by news and vice-versa whether they want to be or not — they must stand in the flow. Especially in the bond market, whose conflicted traders live in hope for something bad to happen which will push up bond prices and rates down.

Market news junkies do pick up human context. Today, how can we not lose concentration, drifting to thoughts of the kids in that Thai cave, and the first rescuer to lose his life? Life, not just money.

Back to money. That’s the job. Stock market people live in fairly constant, warmly glowing exuberance. “Up” is the natural state, “down” just a temporary correction, yet their sales pitches today tilt to announcing Armageddon which only they see and know how to take advantage. Not negative at all, just foolin’. 🙂

Bond market people from eye-opening in bed all through the day run mental system checks, looking (hoping) for something going sour, and holding at least faint hope for the Big One.

The first Friday of each month is the biggest day each month, bringing job data for the immediately previous month. Global trading all but stops the day before. Today? Nothing happened. 213,000 jobs were a little more than forecast. Hot, but wages are growing at barely the rate of inflation, 2.7% year-over-year and not accelerating. The unemployment rate went up to 4% despite all of the new jobs. The un-happening result: the Fed no longer has a theoretical basis to measure hiring its threat of inflation. It’s not their fault — these things happen.

Despite overall economic heat, it’s chilly for half of Americans, the half without any money, many of whom are joining the workforce from statistical nowhere to take poorly paying jobs.

How hot is the heat? The twin surveys of purchasing managers (“ISM”) for June found manufacturing at 60.2 (50 is breakeven, 55 a strong economy) and the service sector, most of the economy, counter to forecast jumped to 59.1. Hot.

The Fed… the net result of this new data is no change. The Fed released minutes of its last meeting, and nothing happened. The plan is set in concrete: add .25% to the cost of money every three or four months until something breaks. That kind of predictability is calming, if not the conclusion.

Other elements of the bond market system check are similarly preggers. Nothing happening right this minute, but sure as sunrise going to.

North Korea.The odds that Kim is playing rope-a-dope are rising, and nobody knows what happens if he is, or if so when the dope gets it. Secretary of State Pompeo is in Pyongyang at this writing, carrying a gift for Kim from Trump: a CD of Elton John’s “Rocketman.”

Things might have gone better in the 1930s if FDR had sent to Adolph a copy of Charlie Chaplain’s “The Great Dictator.”

Trade war. Beginning in 1944 at Bretton Woods, through GATT from 1948 until replaced by the WTO in 1995; and aided by regional agreements like the European Common Market global trade has flourished during a succession of multi-lateral negotiations. These huge and continuous reductions in tariffs and other abuses of trade have always worked best quietly, even secretly. When Ohio must sacrifice in favor of Michigan and Nevada, give Congress only a one-shot vote on the overall package, not the details. Avoid at all costs nation-on-nation confrontation; always work in groups, group-on-one if necessary. In private.

China suffered humiliation at the hands of the West for 500 years, ending about 25 years ago. It does misbehave — badly — in trade relations, but much of that misbehavior will be self-correcting as the rest of the world resists. Quietly. Attempting to force China and the person of Xi Jinping or any successor to surrender in public… ain’t gonna happen. The risks in confrontation are enormous, just unfolding slowly.

NATO. As hapless and helpless as Europe may seem, they are our best friends and essential to our security and economy and democracy. You know the way media on the day after a bad market day finds a photo of a trader with his hands covering his eyes? That’s the way markets feel before Trump goes to this NATO meeting. If Tom Clancy were alive to write a novel about Vladimir Putin resurrecting Russian power, no publisher would find this line of plot credible. In slow motion, off we go.

Nafta. Our two largest trading partners are our neighbors. One with a new president and mandate resistant to bullying, the other with a prime minister much more popular than before we took a swing at him.
Some of these shoes are going to fall. When or how many can’t be known, but the stability in long-term rates since February has been a pleasant consequence of market anxiety. Not even a bond ghoul wants to see any of this footwear land — the price of falling rates will be too high.

The US 10-year T-note, one year back. Pay no attention to market chatter about “inversion” — this time is different: 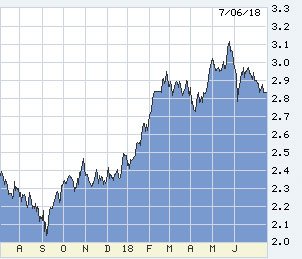 The 2-year T-note is Fed-predictive, and will begin to move up mechanically in the next month, anticipating the Fed’s next shot in September: 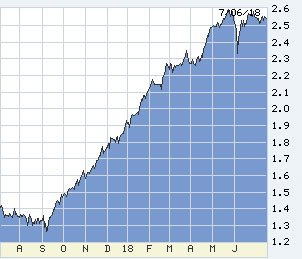 The Atlanta Fed GDP tracker predicts a good 2nd quarter, the six-month average GDP about 2.7% above the Fed’s notion of capacity, but nothing to make the Fed accelerate its hikes: 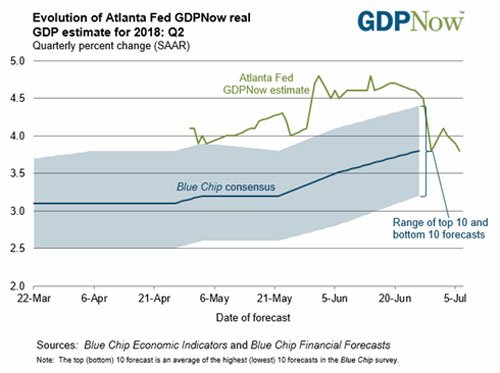 We could use Charlie right about now — other targets for his impersonations are available: 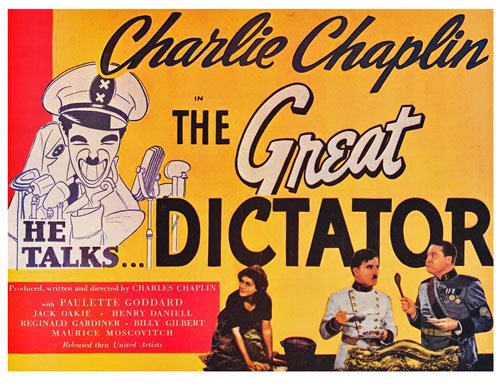