At the end of another head-shaking week, 4th quarter GDP on the slim side, 2.6% annualized, core inflation rising near 2%, the shutdown shut on Schumer’s foot, long-term interest rates did not budge. The US 10-year T-note all week long traded between 2.61% and 2.66%, mortgages about 4.25%.

Good morning, Jay Powell, confirmed by Congress as the 16th Chair of the Fed since 1914. Confirmed by a Congress so entangled in its underwear that it never got around to confirmation hearings — those so-important, long days of perspicacious questioning by senators. What does the nominee plan to do to help farmers in the fair state of Kansas? Will you re-adopt the gold standard?

A free pass for you, Jay, the first non-economist to sit in the Chair since G. William Miller, who in his mere 18 months in office (March 8, 1978 to August 9, 1979) presided over the fastest increase to the highest peacetime inflation in the Fed’s history. A cautionary performance, although there is no reason to suspect correlation between non-economist and catastrophe.

Powell has already shown good judgment by saying nothing. A key skill. Thus we are forced to surmise his thinking. So, take the perspective of an experienced trader of bonds, and that trader’s imagining (expletives deleted) of how the world looks to Jay….

The most-close working relationship of any Fed Chair is with the Secretary of the Treasury. In ordinary times they meet at least weekly. In any time of stress they speak daily if not hourly. The current secretary, Stephen Mnuchin was a mortgage trader at Goldman who escaped to make a fortune in Hollywood. He has his job because he was a early supporter and contributor to the president. This week he became entangled in dollar policy (not even G. William Miller…), destabilized every market on Earth, and drew angry contempt from ECB president Draghi who would not even use Mnuchin’s name while reminding of a formal agreement to “refrain from competitive devaluation.”

Mr. Trump, speaking the next day at the filthy-rich conference in Davos, made better sense than Mnuchin, partially restoring dollar order. Even Sarah Huckabee-Sanders made better sense: “Currently we have a very stable dollar because of how well the U.S. is doing and is as powerful as it’s ever been. We believe in free-floating currency. The president has always believed in that.”

The president’s closing remarks in Davos: “But, America first does not mean America alone.” Yep. In this new world and even the old one, a top job of the Fed-Treasury team is to work closely with the world’s finance ministers, who must be so pleased.

Jay, baby, you’re on your own. Not the first time for a Fed Chair. Treasury has been streaky: from 1972-2000 an exceptionally able series of Secretaries and US economic performance, Schultz-Simon-Blumenthal-Regan-Baker-Brady-Bentsen-Rubin-Summers. From 2000 forward: O’Neill-Snow-Paulson-Geithner-Lew, a group so awful that we’re lucky not to live in caves.

We survived that group because of the two best-ever Fed Chairs, Bernanke and Yellen — easily best-ever if weighted by the challenge facing them. Jay, my man, are you ready to be the next QB after Tom Brady?

Yellen knew that none of the Fed’s old metrics could be trusted, and with immense dead-pan courage said it was not clear what the Fed should do, and then stayed on centerline of a gradual course.

Jay… that course is not available to you. Bernanke and Yellen got a nice, warm, reliable fire going in the ol’ economic wood stove. The new administration in stupendous yahoo ignorance has poured gasoline on your stove.

Maybe, maybe… the big tax winners are big business. Given a windfall of gasoline-money, they have four choices: raise wages, pay dividends, invest in new capacity, or buy back their stock. Jay, if you’re lucky they’ll stick with number four. They have no reason to invest (global demand will not change because of US taxes), paying dividends just makes stockholders pay taxes, and raising wages means having to pay higher wages after the gasoline drains away.

Have you begun to watch markets every day, Jay? Stocks are up again (giggle). When Alan Greenspan warned of “irrational exuberance” on December 5, 1996, the Dow closed at 6437. Twenty-one years and twenty-thousand points later, how high is the sky?

Jay, as in all sports, lucky is better than good. Yellen and Bernanke had the good fortune of low inflation — so low that although they could not explain it, they had only to employ dinky-hedge hikes. They began another round of drip-drip-drip .25% hikes, Yellen departing with the cost of money all the way up from zero to 1.50%. Other than saving the economy after 2008, their second great accomplishment: they hit the timing of switching from stimulus to normalizing perfectly.

You, on the other hand have Patriots’ odds to create the Powell Recession. No matter what, you’re the guy who gets to take away the punchbowl. And if you flinch, the Powell Inflation will be followed by the even-deeper Powell Recession. Luck comes in many forms. This president likes to fire people. You could hope to be canned before an economic event is named after you.

Jay, markets and the whole world are drowning in nonsense news — not fake news, but nonsense. The news flow today is free of editors — no Perry White to say, “Not in my paper.” Just an ocean of click-bait with no marginal cost to post. Not even the cost of paper. Above all else, Jay, we’re counting on you to discover, describe, and to act upon that which is important. And if you get it right, no credit.

The US 10-year T-note in the last two years, on pause before the next step up: 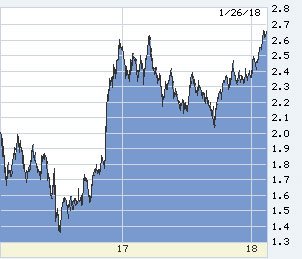 The 2-year US T-note, also in the last two years, actively pricing-in the Fed’s next hikes: 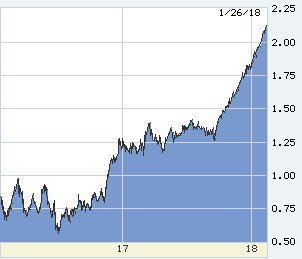