This week is an awkward one for analysis. The top story is the Fed and interest rates on a rising path last seen in 2004.

But it’s impossible not to mention the “shutdown” event underway, which may evaporate by the time you see this. In the meantime it looks like a version of Mel Brooks’ “Blazing Saddles” in which every actor from stars to extras has taken at least one hostage and is also held hostage by somebody else, clumps of people arguing about who is hostage to whom, thousands of six-shooters pointed and cocked.

The main things to remember about these shutdowns: markets ignore them and they have not done noticeable damage. The opposite is true of the Fed. So, on with the Fed!

For the Fed and housing and mortgage purposes, inflation is the one key thing to keep in mind. Long-term rates rise and fall with it. The Fed directly controls short-term rates which it manipulates for several purposes and can wander widely without doing much to long-term rates.

Long-term investors and traders think long-term (duh). The bond market looks across short-term events. We have had fifteen years of low and stable inflation, but may revert to something higher. The Fed began two years ago to raise the overnight cost of money from zero, and the bond market has largely ignored the Fed’s moves until this week.

We do not have the fact of rising inflation. Not now, not yet. The threat of it lies all about us like kindling, from historical episodes to the present possibilities flowing from a too-tight labor market to a too-hot economy, but kindling is not fire.

In a normal cycle after a recession, as soon as the economy’s eyelids flicker open and the Fed makes its first hike, the bond market races higher in yield — WAY higher, trying to anticipate inflation and the Fed during the recovery following. Since this recovery began in 2009 the bond market has repeatedly jumped in anticipation of a normal recovery (usually after new Fed stimulus) and been wrong every time.

So, in the absence of rising inflation, and burned by recent history, bond yields are rising very gradually, “bulldozed” by the Fed, not front-running to some ultimate Fed level. The long-term rate rise underway is entirely Fed-pushed.

And Fed logic is shifting upward, three forces in play. First is the ever-tighter job market. Second and third are the tax bill working in concert with the stock market. The Fed is in the process of switching from normalization — just to get off zero — to pre-empting, actually leaning against economic growth.

The tax bill is bringing some stimulus to an economy that did not need any, if only via the wealth effect from stocks. People do wacky things when their 401K envelope looks like a slot machine, three cherries lined up every month. The stock market may or may not have been bubbling before the tax bill, but its behavior since makes any Fed governor think about pulling the red handle in the corner. The Fed hints now that three hikes this year are the low-side case, and a fourth is possible.

Specific bulldozing math: if inflation stays low, the 10-year T-note yield will rise this year with the Fed but slower, maintaining some positive spread to the Fed but narrowing. When the Fed hikes some time this year or the next and 10s do not move upward at all, that’s the signal that the Fed should stop. If the Fed hikes one more time and the 10s yield comes down, that’s the sign that it’s too late for the Fed to stop.

Nobody knows how wide the 10s-to-Fed positive spread will be. 10s this week moved up into the high 2.60s in anticipation of the Fed advertised pace of tightneing. Here’s a guess: 10s will rise half as fast as the Fed. If the Fed hikes .25% three times this year, .75% all together to 2.25% with more coming in 2019, 10s will rise from 2.64% today to something around 3.00%, mortgages just below 5.00%. Then things will get hairy, at least because housing is not overheated and will be vulnerable to rate rises.

All the above is predicated on inflation staying at or below 2%. If inflation rises farther, recession. Simple at that.

Here is a chart of the Fed funds rate back to 1995, the grey bars marking recessions.

Two tightening cycles are evident, and the beginnings of a third. In each of the first two the Fed thought it was properly tightening into rising inflation and visible financial bubbles. In retrospect it was tightening into one of the great, super-cycle DROPS in inflation toward dangerous deflation, and the bubbles should have been handled by regulation.

I’m a Fed fan, and they were doing the best they could with historical information. The situation today is similar to those prior two tightening cycles. We may have a financial bubble, and there is no evidence of rising inflation except as produced — unsustainably — by the world’s central banks. But the Fed must hedge against inflation; if it loses against infaltion, all is lost.

The 10-year US T-note in the last week. We are out the top, the breakout point 2.62%. The next stop is 3.00% or at least considerable volatility, limited only by fainting in the stock market. Mortgages are headed above 4.50%: 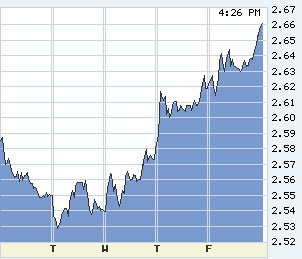 The 10-year T-note in the last five years. It is crucial to note the total absence of chart support between today and the 3.00% double-tops four years ago: 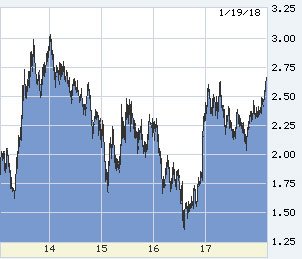 Keep a close eye on Treasury 2s. The Fed is sending the first signals that some there think it may be behind the curve, and 2s are rising like the stock market: 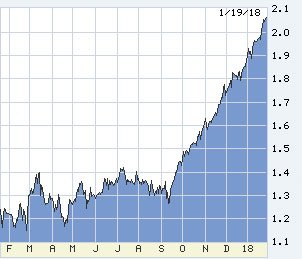