Change is in the winds of markets now, and as we move from the extended recovery from the Great Recession to something else it is hell to sort through new data and opinion.

The web has made infinite the supply of commentary, and one effect is the need for commenters to attract attention. In financial markets, click bait comes in two forms often simultaneously: sales pitches, and/or exaggeration of commonplace or random events into asteroids about to wipe out whole continents.

So, one asteroid at a time…

Interest rates are rising. Duh. Dilly-dilly. The increase matters only if it is big, or catches a lot of people leaning the wrong way. The yield on the 10-year T-note has broken out of a comfortably narrow 2017 range, four days out of five last year between 2.25% and 2.40%. Mortgages spent the year within one-eighth of one percent above or below 4.00%.

Long-term rates depend on inflation much more than upon the Fed. If sustained inflation suddenly perks above 2% and forces the hands of markets, then recession risk. However, the forces which have defied global central banks and held inflation low — frackers and IT — are as strong as ever.

Global business is good, thank you. There are all kinds of things which may hurt global trade: Brexit, war in the Middle East or Korea, export predation by Germany and China, a protectionist spasm by the US — a long list of genuine risks. However, the world seems more and more able to focus on the benefits of commerce over foot-shooting.

The business cycle isn’t cycling. The world is moving faster, but not our thinking. Serious people still mention the “slow recovery from the financial crisis.” By now, ten years later, consider that crisis a distraction from other, larger, and longer forces: the completely unprecedented reaction time of global business, the fungibility of global labor, and instantaneous discoverability of prices destroying pricing power.

The business cycle used to involve recovery leading to overheating and exposure of overconfidence. Hyman Minsky gave us the thought that prolonged good times create proportionate blind and lazy overextension until a “Minsky moment,” when all delusions fall away and into a liquidation spiral.

Credit is central to that cycle, and we do not have any meaningful overextension of credit today. Thank the financial crisis for that: credit restrictions are so broad, well-tended, and reasonable that it could be another generation before we lose our credit marbles again. Properly tight credit is the single most-protective element in the economy.

The exception, of course is the global over-borrowing by national governments. Hope like hell that I’m right here, that a new recession is far off and likely shallow, because we may be losing the ability to borrow and spend our way out of the next recession. However, even that caution may not apply, thanks to the central banks’ new magic trick, stuffing trillions of dollars of sovereign bonds into the top hat, beside the rabbit.

The stock market is trading in straight-up fashion which has ended badly on every previous occasion. Does that mean this time? I have no idea. I do have one parochial hope, that for the first time an episode of rising rates will kneecap stocks before the usual victim: me. That is, housing.

The tax bill will have some consequences. And probably already has. One old Wall Street parable: “Buy the rumor, sell the fact.”

Bill Dudley, retiring prez of the NYFed did his job. The overriding task of the NYFed is to discover Wall Street misbehavior and stop it before the thieves in pinstripes can do damage. Well done, sir — quietly, too. In sharp contrast to predecessor Tim Geithner, from whom The Street removed shirt, shoes, and undies without his notice or protest.

Yesterday, the completely apolitical Dudley accused the tax bill of enhancing our two most-dangerous risks: in the near term the bill has elevated the risk of overheating, and in the long term damaged US fiscal soundness. True, but he estimated that GDP growth might be elevated by 0.3% — an accounting error — and our fiscal behavior has been so stupid that the loss of a few more IQ points won’t matter.

This New Year Prediction Confirmed: Two whole weeks ago I thought the actions of the ECB and BOJ would be crucial. Sure enough, the Germans this week pushed for an end to stimulus (and they desperately want a German to succeed Draghi), and the BOJ trimmed its bond-buying. Central to the recent rise in US 10s has been the far larger percentage jump in German 10s, from 0.31% to 0.51%, and Japan’s to a one-year high — still a negligible 0.09%, but up.

Neither zone can survive a big increase for long. However the effect on US markets is to suspend hope for more ECB/BOJ stimulus pulling down on US yields.

If they’re not going down, they’re going up. 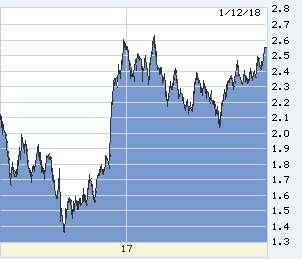 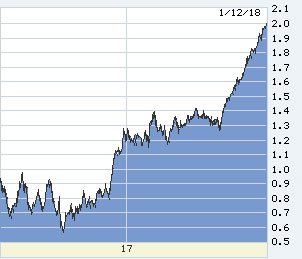 A tale of two charts, and politics… The NFIB has for 45 years surveyed its small business members, and the overall chart of optimism has been an excellent economic indicator. Until now. The membership is strongly right-side, and its economist Dunkelberg even more so. The chart went nuts after the election last year, and departed the actual small business fundamentals which show in the second chart. It is painfully reassuring that small business is weakening — if the economy sags back from a still-theoretical election and tax-bill boost, that will take heat off the Fed, and we’ll see it first in the 2-year T-note: 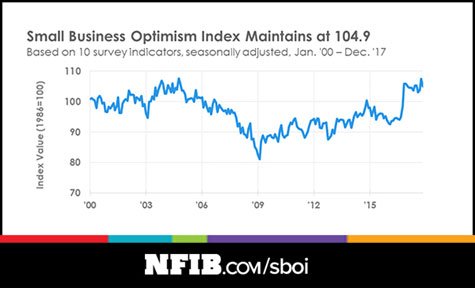 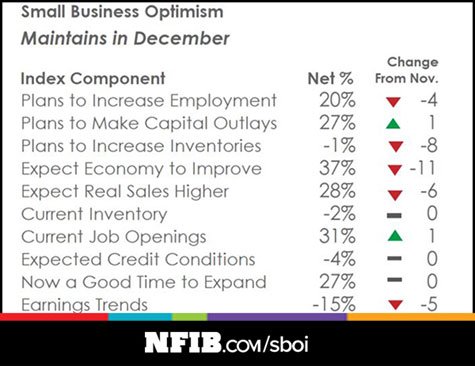