We interrupt our hurricane coverage for news from the outside world.

The football season has begun: Kansas City beat New England 42-27. NFL Commissioner Roger Goodell attended the game, was laughed at and then booed, a working-life experience much like being Chair of the Federal Reserve.

Economic data were sparse but instructive. The purchasing managers’ ISM survey of the service sector found acceleration in August, from July’s 53.9 to 55.3 — any reading over 50 reflects growth, and mid-50s is lovely.

On the inflation front, one principle: sustained inflation can only get going if incomes rise. The second-quarter measure of unit labor costs (which includes wages and benefits) was revised down to 0.2%, less than 1% annualized.

Long-term rates continued a gentle decline, the all-powerful 10-year T-note down to 2.05% and taking mortgages to 3.875% and even lower in some cases. The causes of the rate decline are as before: extremely low yields on comparable government bonds (German 10s now 0.312% and Japan’s negative 0.004%), also disbelief in any stimulus to come from this Administration or Congress, and persistently low inflation leading to recalculation of the Fed’s intentions.

Hurricane News: Some financial media suggest that these hurricanes may slow the economy and press rates lower. They will cause a great deal of human suffering, certainly, and harm to local household finance, and some limited damage to commerce; however, Congress will inject a few to several tens of billions in disaster relief and repair which will stimulate overall economic activity. Much like infrastructure spending in general, a temporary boost leaving things as-were before (except more deeply in debt), unless investments focus on long-term genuine productivity.

Stick with the non-weather world. Preliminary storm tracks from the Financial Forecasting Center have the Fed exposed to a Category 5 storm. Yellen’s term is up in February. Will she be re-appointed? Or Gary Cohn, ex-Goldman and White House Economic Czar? Or any of a half-dozen others under consideration? And who will replace Stanley Fischer as Vice Chair? And fill the four-of-seven vacant seats for Fed governor?

Begin at the beginning. All modern nations have a “Fed” — a central bank assigned the unique duties as legal counterfeiter. These banks create or destroy money and credit (not the same things) in order to preserve the highest possible economic growth with the least inflation. Even authoritarian nations employ and respect these banks. Possibly more important than the change in Fed leadership, the head of the People’s bank of China is soon to retire. Brilliant and charming Zhou Xiaochuan has been governor of the PBOC for 15 years; his excellence has allowed him at 70 to overstay China’s mandatory retirement at 65.

All of these banks are anti-democratic star chambers: good people appointed and given great power often used in ways contrary to the wishes of elected governments. Since the first bank with these powers (the Bank of England, ca. 1875) the world has gravitated to unanimous central banking because we know that we can’t be trusted with money, and neither (certainly) can our elected representatives be trusted.

The Fed appointments ahead will fuel all sorts of financial-market anxiety, and the commentariat and media will do all possible to boost anxiety into flaming panic.

I hope for Yellen, of course, although others would be fine. Cohn is a “deal guy” not equipped for an exceedingly political job, and he may be out of favor anyway. Some people mentioned are “formula” nuts, who would constrain Fed latitude by mathematic process. Others would limit the Fed out of pro-market zealotry.

The president’s decisions will be like his others. He has shown some talent for appointments, notably the entire foreign policy and defense team. Others have been doctrinaire. The president is a self-avowed fan of debt, and regards default as a beneficial tool. Other than criticizing Yellen during the campaign as “very political,” has expressed nothing about Fed policy except that he likes low rates.

Hurricane tracks we can forecast. Not random events. The coming appointments will be well nigh random, but while floating in a choppy sea, cling to this spar: no matter who gets appointed, the Fed’s task will be the same. And the rules are the same. Allow or encourage monetary policy and regulation too loose or too tight and you’ll be punished. Fast — far faster than in the old days of Greenspan and before.

No matter who leads the Fed, within weeks the new Chair and governors will be stuck where the old ones have been: inflation is not rising as it should as unemployment falls. And inflation may not be in an extended process of rising, as the Fed consensus has assumed, but may be falling, and the Fed’s recent rate hikes as small as they have been a mistake.

Before charts, brief political notes for the brave and not touchy-partisan. If it were not for the hurricanes, Mr. Trump’s Wednesday flip to warm-huggies for “Nancy and Chuck” and unprecedented humiliation of McConnell and Ryan and his own staff would receive a great deal more coverage.

“Unprecedented…” Imagine a president — any president — treating Senate Majority Leader Lyndon Johnson this way. Or Howard Baker, Mike Mansfield, Bob Dole, or Robert Byrd. Or Speaker of the House Sam Rayburn, John McCormack, or Tip O’Neill. Humiliate any of these people, and the rest of your presidency would be an agony beyond conceiving.

We are in a time of leadership by miniature people, perhaps a decadent end-game of times too fat. But Wednesday’s Oval Office show was enough to awaken micro-men.

All of the fables of selling one’s soul to the Devil in exchange for favor presume that the Devil keeps his word. It’s the soul-seller who later tries to writhe his way out of the deal. Ryan and McConnell sold their souls in exchange for a Republican majority and legislative accomplishments which would grow the base and Party. But all along, a year and a half now, Mr. Trump appealed to the Tea Party base and behaved badly to all others. Just one week ago the Republican leadership in Congress laid plans to work around a difficult White House and get some things done.

Now McConnell and Ryan have neither souls nor deal. Treasury Secretary Mnuchin and Budget Director Mulvaney today got a House GOP reception like Godell’s in Foxboro.

Trump’s entire business career has been based on intimidation and bravado, and whenever wearing out the deal partners in a particular city, move to New Jersey. He does not understand that Congress cannot be intimidated, and there is not another one to move to. Nor does he understand that our entire government was structured from the beginning to prevent anyone from giving orders. Build consensus or nothing.

The dominant media/commentary response to Wednesday has been to see an opening for bipartisan progress. The reality is exactly the reverse. Everyone in both parties now knows the deal: no soul and no deal. The chances for legislation which would aid the economy have receded.

The US 10-year T-note fell all week long, and politics were part of this leg down. Note the pop up on Wednesday on false hopes of bipartisanship: 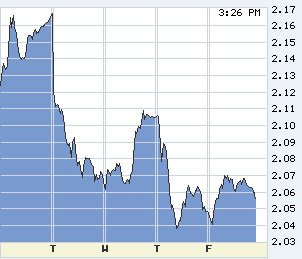 The 10-year in the last year. Now, no telling how far down this run can go. There is no rate support all the way back to the false-hope election: 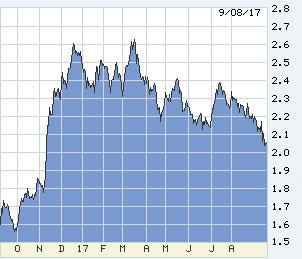 The Atlanta Fed tracker is perfectly happy, 3.0% GDP in train: 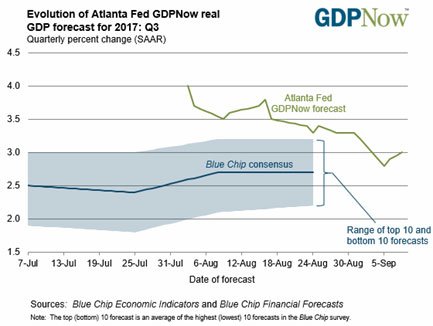 The ECRI long-term index is consistent with Atlanta, choppy but happy: 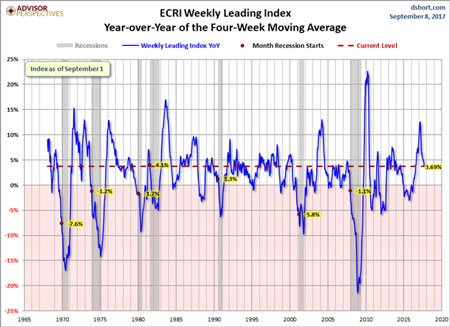