The biggest news this week is what did not happen. The administration rolled out its tax plan, and markets ignored it.

The plan has expanded from one page last spring to nine pages but is still just a list of principles, not detail. Markets did not react partly because there was nothing new, but largely because it is inconceivable that all of the principles as presented will pass into law, and no way to know what mix, if any will be enacted and to what economic effect.

Last fall, markets instantly after the election leapt into the Trump Trade. Fool us once, not twice. The betting line on the tax proposal goes like this. A limited deal has a good chance, if only because giving away money is irresistible in Congress. Only two aspects would both have a decent chance of passage and significant economic effect: raising the basic deduction will have bi-partisan appeal, as will the ol’ snake oil that tax cuts will produce stimulus and deficit-closing tax revenue.

Any other mixture of new tax law will resemble the F-111 fighter designed in the 1960s, intended to fulfill all missions for all services, but missed all so badly that its nickname was the anti-heroic “Aardvark.”

Economic data are now polluted by hurricane damage and response, but one piece fairly shouted: August core PCE inflation year-over-year fell again, from 1.4% to 1.3% and further confounded Fed forecasts. That slide may give impetus to deficit-spenders, although the Fed’s inevitable reaction to deficit stimulus will be to lean against it.

The Great Depression ended the period of Fed passivity after its 1912 founding. An active Fed gave birth to a great Wall Street pastime: Fed-bashing. Bashing is especially attractive to financial salespeople, who on any day can pitch to any potential client or excuse any failure by blaming the Fed. The miracle of alternate universes has produced unlimited invention in blame-casting. Bashing is so commonplace that bashers no longer need to offer recommendations for what the Fed should have done instead of what it did.

Whatever it does is wrong. Thus straight-faced flannel pinstripers say we’d be better off without a Fed, or one confined by mechanical rules.

This week Janet Yellen opened a window for all to see exactly what she and the Fed are thinking, how and why. She does not have the telegenic power of her predecessors, but more than makes up for the absence by her direct honesty. Her speech this week is in short and readable English, just six pages.

The equations appended to the speech are intelligible only to a Ph.D. — not to show off, not her style — but to keep her colleagues disciplined, and to show anyone else how deadly serious the Fed’s deliberations are. One example:

The ECI is central to the Fed’s predicament: analysis established for more than a half-century has recently failed to predict inflation. Another ECI chart, below, illustrates the extreme importance of the failure.

Yellen is so straight that she put the problem in the most plain English: “As I will discuss, this low inflation likely reflects factors whose influence should fade over time. But as I will also discuss, many uncertainties attend this assessment, and downward pressures on inflation could prove to be unexpectedly persistent. My colleagues and I may have misjudged the strength of the labor market, the degree to which longer-run inflation expectations are consistent with our inflation objective, or even the fundamental forces driving inflation.”

Quickly, give me the names of five most-senior government leaders who have recently said that they may be mistaken. And who have the duty to act anyway.

The center of Fed-bashing today is retrospective: the whole QE and zero-rate response to the Great Recession was a mistake. Then, so that bashers have no accountability: the Fed’s response screwed things up so badly that the Fed can’t fix the results. Bashers point to relatively low economic growth, but the Fed never said it had the power to create higher growth — in fact, today says that the speed limit is lower no matter what the Fed does or what public policies are adopted (except for a focus on education and productivity, which nobody wants to hear). Bashers will say in the same paragraph that the Fed should normalize rates faster, raising them, but that raising them is a mistake.

In the near term, stick with Yellen. If the PCE measure of inflation is correct and stable (probably the former, not the latter), the Fed has only now gotten the cost of money up to the most conservative rate of inflation. That is stimulative policy any time, any place. To continue very gradual increases is just a sensible insurance policy. The term, “tightening” does not apply — nowhere in the credit system have terms or availability become tighter.

The 10-year T-note has bounced up off a recurrent bottom, but is still within many-month bounds:

Yellen’s speech did move the telltale 2-year T-note, now pricing-in a December hike from 1.25% to 1.50%. Note that the dollar has rebounded accordingly: 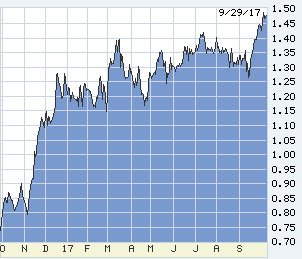 The ECI chart is numbing to civilians, but brings consternation to Fed meetings. “Expected inflation” has been mistaken for ten years. “Trend productivity” is the actual result, falling steadily, which should — should inevitably — mean less slack for non-inflationary growth. Has the model become permanently obsolete? Or is the inevitable merely delayed? Or — cold sweat — is tension building during the delay, to be released suddenly? You be the Fed Chair, you decide… or bash:

Pat Oliphant and Jeff MacNellly were the great political cartoonists of their day. Any day. The tax plan as F-111… spot on: 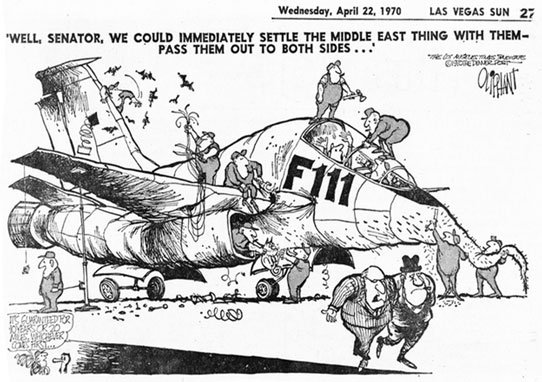