Markets are reasonably stable at this week’s end. Pushing up on rates has been the hard bottom set two weeks ago after two months of decline, and this week’s hawkish Fed-meeting results.

Pushing down: everyone in markets keeps an eye on PRK missiles and nukes, and their leader and ours. In such circumstances interest rates tend to improve on Fridays because of risk-off bond-buying to cover potential bad surprises over the weekend, the trades unwinding on Monday mornings. S&P’s downgrade of China (AA- to A+) helped, too.

The flow of news — all news — is unsettling. The Russian government planted fake-news ads on Facebook, and where else? The Equifax adventure… how much do we know, how much do they know, and how much risk to consumers from a breach of a company for decades shouting RISK! to get us to buy credit data protection from them?

An NYT business columnist this morning asserted that the rich do not pay the maximum marginal tax rate, his source the average rate paid (in a system of graduated tax brackets, everyone’s average rate is lower than the top one). A WSJ reporter in a short piece today repeatedly claimed that “No one’s really sure how, or if, QE works.” Good heavens, man — if it didn’t work, you would not have a paper to wrtie for. CNBC’s Santelli interviewed economist Jody Shelton, a gold-standard advocate, and the two of them high-fived, “The Fed does more harm than good.”

Freedom of speech and the press are among our most-prized possessions, but the exercise thereof does make it hard to qualify information. The success of these constitutional protections rests entirely on our ability to sort through the spectrum, from nonsense to willful deception.

In that vein, good luck with the following.

Raw data is good whenever we can find it. I served a five-year sentence at a tough-minded school: if any of us offered an unusual fact in class, the Master was likely to say, “Excellent, Mr. Barnes. On Monday bring to class two pages of elucidation and footnoted sources of your ‘fact.’”

The president of the Cleveland Fed, Roberta Mester is a relentless hawk, demanding higher rates at every meeting. She is convinced that inflation will soon reach the Fed’s 2% target, although it has not for most of a decade. This week she expressed her faith this way: “Since the 1990s, assuming that inflation would return to 2% over the next one to two years has been one of the most accurate forecasts.” That is not a forecast; it is astrology.

The Fed this week has been a fountain of raw-data facts. The Fed is caught in uncertainty because a key analytic tool has broken: the relationship between employment and inflation is no longer predictive. But there is more than one way to skin inflation. High rates of employment at least correlate with wage gains and inflation, but so does credit growth. There are rare periods of stagflation, a slow economy but rising or high inflation, but even that is hard to sustain without credit growth.

The Fed’s statistical release H.8, seasonally adjusted “total bank credit” shows something unusual: in 2017 growth in bank credit has tanked to the lowest level since 2013, when the Fed felt that QE was still necessary. In 2017 Q1, 1.3%, in Q2, 3.5%, and Q3 is rebounding a little, but only to 4.0% — a trend lower than pre-inflation GDP growth. No one seems to know why, but there is nothing to accelerate the economy or inflation.

The largest national sector of credit is mortgages. Total home mortgages, all types grew only 1.2% in the first half of 2017. Distorted downward slightly, as we are still writing off bad stuff, and new good stuff is growing a bit faster than 1.2%, but way less than GDP growth. If anything, a drag.

Home equity loans including all second mortgages: the total balance outstanding has shrunk every 90 days since the beginning of 2016. These are in theory “hot money,” poorly considered liquefaction and spending of home equity.

Mortgages on apartment buildings: a little better, up 3.8% in the first half of 2017. Commercial mortgages: 2.2% since January.

All other data aside, if the Fed is too easy then credit will grow too fast, and it is not. Nevertheless, the Fed’s newest forecast of its future rate hikes (see below) is aggressive. One more hike in the cost of money in December, to 1.50%, and then three more in 2018. The bond market has reacted to this newest threat as it has to all prior in the last several years: ain’t happenin’.

And until the White House makes some announcements, the markets don’t even know who is happenin’ at the Fed. And neither do the Fed’s inmates.

The US 10-year T-note. The recent pop up in rates has a quality of “what were we doing down there?” after a two-month decline. Truly not much movement since spring. 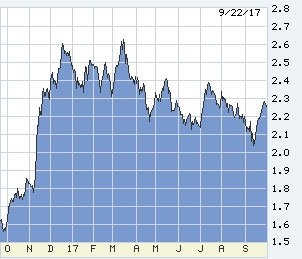 Write here…The 2-year T-note is the Fed telltale, and it has begun to price-in a December hike. But just begun — the 2-year yield should be significantly above the Fed’s cost of money. If the Fed is going to 1.50%, 2s have a quarter-point yet to rise: 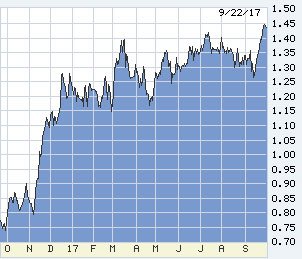 The Fed’s dammed little dots, each Fed governor and regional Fed president estimating the cost of money at the end of each year ahead. Note how wildly strung out the guesses are in 2019 and 2020. Throw out the top four dots cast by perma-hawks, and two of the lows (identities are withheld, but St. Louis’ Bullard and Minneapolis’ Kashkari are un-serious people, currently doves). Painful to say, but if the Fed is headed anywhere near 3%, then mortgages near 4% will be a fond memory: 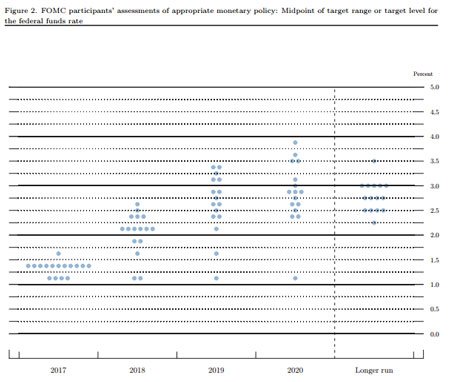