The deepest — eternal — philosophical question: What matters, and what doesn’t?

Today anyway, PRK ballistic-missile plinking does not matter. You can’t pick up a box of these things like .22 ammunition at the hardware store. Maybe they’ll run out.

A bomb in the London underground? Uh-uh. Old hat.

Memo item: interest rates rose this week, only a little, the 10-year T-note from 2.05% to 2.19%, but mortgages still below 4.00%. The rate rise broke a two-month straight-line decline, but at today’s level we’re still within an inch of the lowest since the election.

Will not matter: new economic data will be hurricane debris, noisy and unreliable.

The last pre-hurricane data are wobbles, not trends: year-to-date core CPI up-ticked from 1.6% to 1.7%. And June-July retail sales were revised down from a gain of .6% to .3, August’s disappointing also, up .2% versus the .5% forecast. That consumer slippage has pulled Q3 GDP forecasts down to 2.2% from 3%.

Does not matter: financial publications have been whining about the “dollar falling.” It has, relative to the euro — solely because the ECB may end its QE, and the steady-as-she-goes US economy (and hurricanes) may delay the next Fed rate hike. The currency movements are not proxies for national greatness, just reacting to short-term changes in national interest rates.

The juicy stuff: tax reform. If significant tax cuts appear, rates will rise. “Reform,” which if it happens will not be reform, could hurt rates, help them, or most likely not matter.

Timing of tax changes… I’ve got a long-time friend, brilliant architect and builder, 800 score on his math SAT but spare with words. Favorite movies: original “Three Stooges.” Talks with his eyes, if at all. Decided decades ago that most conversation does not matter. Every client tries to pin him down on timelines usually beyond his control, and so he adopted a unique method to discourage poking at him without bringing offense.

My friend says he’s never met Donald Trump, but has heard of him.

Most people after repeated receipt of the “two week” treatment stop asking. Markets reached that conclusion about tax reform many months ago, ignoring the flow of new two-weekers like the one promised this week.

Markets could be right that none of this matters because nothing will happen. However, ignoring all possibilities may magnify the result if something does happen.

First, a tax cut. The president insists that we will have a yuge cut for the middle class. The problem: the middle class is yuge, which requires a yuge amount of money to be given away and we don’t have any. We’ve got a structural deficit near $600 billion per year, guaranteed to rise until we do something about the cost of health care. Cost, not coverage, which means taking on the Medical Mob, and civilian dreamers of house calls by Marcus Welby, MD. Both parties would rather pay protection.

The only way to find yuge money is to pretend: the cut will heat up the economy and produce more revenue which we can give away in advance. Having tried that fairy tale previously, markets doubt that Congress will again vote for it. And of course markets know that we do not need a tax cut, at best resulting in pointless overheating and Fed whacking.

The chance for reform is trickier because we have to wait two weeks to know what it might be.

Potential reform has the same problem as repeal and replace. An angry out-of-power party stewed for eight years in its own echo-pot. In power they discovered that their best idea boiled down to canceling health insurance for 20 or 30 million Americans. Uh-uh.

The essential concepts for tax reform: 1) broaden the tax base and reduce rates, 2) remove distortions from the code which encourage tax-gaming instead of productive economic decisions. The first one fails because we already tax everybody and everything that has any money — did that in 1987 — and we’re so hungry for revenue that since 1987 we’ve re-raised tax brackets. Nothing to trade, no deal.

The second… Republicans have had a variety of hallucinations. A simple code, tax returns on a postcard. 320,000,000 of us in a $20-trillion economy… economic life has not been simple for a long time, and the code is appropriately complex. Fewer tax brackets: so what? Computing percentages is not complicated; complexity comes from defining taxable income and eligible deductions, and millions of us constantly trying to invent evasive edges.

The worst idea is already dead: Paul Ryan’s massive tariff on imports. The scary part: he still doesn’t understand why it was a bad idea. As bad, but domestic consequences only, these twins: immediately write off all capital expenditures instead of depreciating over time, and disallow interest deductions by corporations and unnamed others. These twins are anti-reform, increasing uneconomic distortions: the first would encourage unneeded investments to get a write-off; and the second intended to bring more tax revenue to give away in cuts would produce yuge chaos.

The one mildly defensible effort: to reduce US corporate taxation to a rate comparable with the rest of the world. The problem: being the world’s biggest and most productive economy brings complications. 80% of US businesses are “pass-through” LLCs, S corps, partnerships, and sole proprietorships taxed at personal rates. If corporate rates drop below personal ones, every pass-through business will convert (or try) to C corporation, with all of its awkwardness, double-taxation of dividends, AND collapse revenue at the new and lower corporate rate.

Who would like to explain all of this to the president?

In the absence of a line outside his door… “Two weeks.”

The next move in the 10-year T-note is going to depend on the economy, and as above the data stream will be garbled for a couple of months: 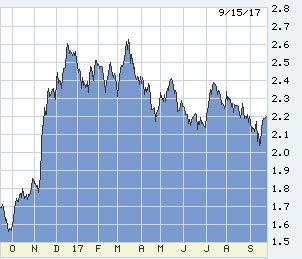 The 2-year T-note is the Fed guide, and despite the increase this week really has not changed since June, and soon to be hostage to new appointments to the Fed. “Two weeks.” 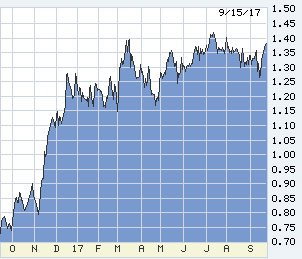 The NFIB monthly survey of small business by components is net neutral: 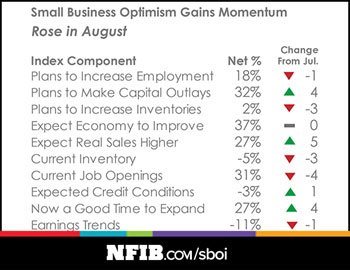 Overall optimism is still unhinged from reality, conservative respondents hanging on to the post-election burst. Which, if it lasts long enough will be a new reality — but an old, reliable, real-time economic indicator no longer: 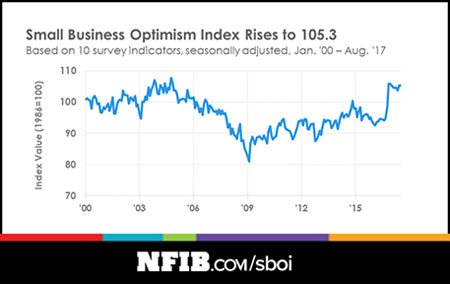 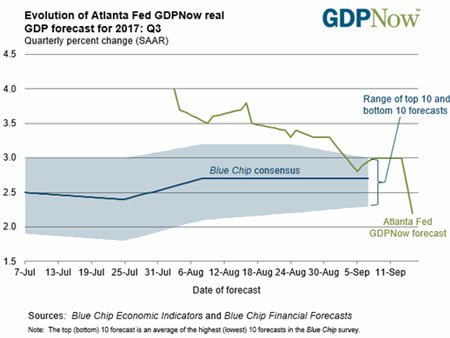