The last week of summer vacation has brought a burst of new and healthy data, and a modest drop in long-term interest rates, mortgages below 4.00%. But the best stories in this last quiet week are reflections on human nature.

August payrolls plus-189,000 slowed from early-year gains, and the prior two months were revised lower. The purchasing managers’ ISM index in August rocked back up to 58.8 from 56.3, now about as high as it gets. The gain in average hourly earnings slowed in August, but from a fast July, the year-over-year steady at 2.5%. The Fed’s favorite measure of inflation (personal core expenditures deflator) is stuck on the low side, up 0.1% in July. 2nd quarter GDP was revised up to 3.0% annualized, putting the first half of 2017 dead-on the Fed forecast at 2.1% growth — and will out-perform when the 3rd is added in.

These results will not change the Fed’s plans to begin to reduce its balance sheet in September, nor the good chance of a rate hike in December. Yellen may not be reappointed, but will do what she feels she should do until the last day.

The decline in long-term rates is thin and fragile. US 10-year T-notes traded as low as 2.10% this week, but the prior low in July was 2.15%, so hardly a breakthrough. And with the Fed moving the floor upward, economy fine, it’s not a good idea to bet on lower. As it is, the principal force pulling down is global distortion: Japan’s 10s are no longer a market and barely trade at all: the BoJ wants its 10s to yield zero, and so they do, 0.001% today.

The ECB has a different problem: Eurozone economies are in a bit of recovery, inflation off the floor, hence the euro suddenly $1.18 and rising after a long time below 1.10%. A stronger euro will hurt those economies, but we must fight inflation, mustn’t we, and German 10s are trading 0.385%. Thus US 10s look good no matter what the Fed intends.

Then… humanity. After the 2011 Fukushima tsunami, media there and here rediscovered “tsunami stones” (google says: tsunamiishi), inscribed blocks emplaced as long as 600 years ago: “Do not build homes below this point.” The Japanese are a serious and studious people, respectful of ancestors. Heed the ancient warnings? Not just homes but nuclear plants? NooOOOoo.

Japan was settled a few thousand years ago. Houston: in 1836, but long enough to notice a few things. The geology under Houston is clay and sand deposited by recurrent flooding. Also non-absorbent, although pavement is even less so. Downtown Houston’s elevation above Gulf-level: fifty feet and flat. The nearest Gulf embayment is 25 miles away. At a drop of two feet per mile, drainage is pokey.

Humanity evolved to get the bear out of the cave, not to admire its ancestry or to plan for future ursine migration.

This time of year brings a more easily remembered event, the annual consequence of back to school. In summer kids visit strange places and alien gene pools of disease. Back to school produces a mass exchange and recombinant disaster, especially for the defenseless immune systems of parents. Some Septembers I thought I had malaria. Maybe dengue.

Tie together these aspects of human nature, and you’ve got three days to prepare yourself.
Congress comes back on Tuesday. Harvey has temporarily accomplished the impossible, driving the Trump Show off of CNN and FOX, and quieting even the star himself.

Raising the national debt limit will have top priority, and if we’re lucky will consume all of September. Any political wound tentatively healing will be re-opened.

Next up: tax “reform.” The Game of Tsunami Stones.

Tax cuts are routine. Early in every presidency, every one wants to pitch goodies out of the limousine motorcade. Clinton and Bush I were the only exceptions in modern times, both accomplishing the impossible: trading spending restraint for increased revenue. They had to, to offset the foolishness of early Reagan, which even middle Reagan began to fix.

These spending/tax deals were made possible by the greatest tax reform in US history in 1987, the great trade of closing loopholes in exchange for lower rates of tax. That reform was so well done that we don’t need another.

There is no basis for a new trade. Time has passed: brackets have gone back up, and even more loopholes have been closed. Example: in 1987 the mortgage interest deduction was capped at the interest on $1 million in mortgage debt, plus $100,000 in home equity line of credit. Inflation has erased 54% of that benefit. And the deduction has been greatly limited for households earning more than $250,000 in taxable income (together with most itemized deductions).

It’s human nature not to be able to remember 1987, or much since, especially something like tax calculations. Worse by far: human fondness for being misled. The prior administration put all chips on soaking the rich. Too bad: mostly pre-soaked. The Prior Occupant empaneled the National Commission on Fiscal Responsibility and Reform, whose report is one of the best public works in US history. It demolished the favorite nonsense of both parties, which have ignored it since, and next week will resume their flows of argument, both making Houston effluent look clean. If we are lucky, this new “reform” effort will fail altogether and Congress and the administration can think the unthinkable: compromise on the nation’s actual needs.

Our real problem, of course: half of our people are not equipped to compete in global commerce, and their tax-paying ability is crimped. Focus every effort on getting them into the game and we’ll have more revenue and less need for spending.

The 10-year US T-note in the last year. The Trump Trade has fizzled about as far as it can: 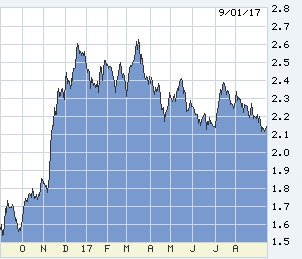 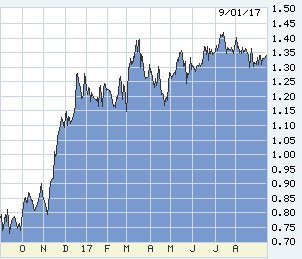 The economy has over-performed since winter. We do not need a tax cut: 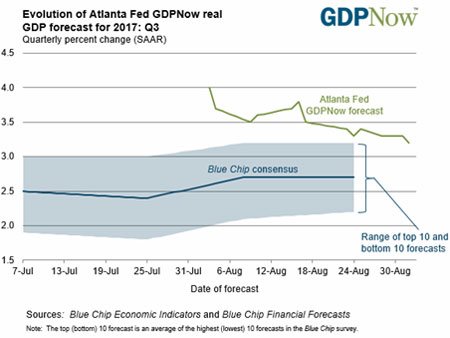 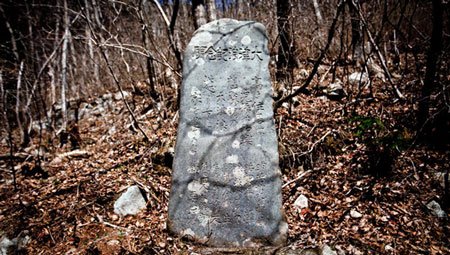