This week’s news is mostly a tale of misinformation. But first, some reliable data.

July payrolls released this morning grew by 209,000, enough to stop cold a decline in mortgage and other long-term rates. Also roughly double the monthly gain which would stabilize the unemployment rate at today’s 4.3% — either stop hiring, or add more people to the work force, or the rate of unemployment will continue to fall, presumably below zero, and with who-knows-what consequences for wages and inflation. The payroll data also showed average hourly earnings increasing just as they have been, 2.5% year-over-year.

The twin ISM surveys of purchasing managers have been excellent predictors of the overall economy. The July figures: manufacturing cooled slightly from red-hot, to 56.3 from 57.8, and the service sector more so, to 53.9 from 56.9 but healthy and consistent with GDP growing a bit above the Fed’s 2% estimate.

Trailing data from June were not quite so bright, and Q2 GDP may be revised down a little. Construction spending fell 1.3% in June, although still up 1.6% year-over-year. Personal income and spending were statistically unchanged, and a Fed-favorite inflation measure continued to tail, “core PCE” up only .1% in the month, year over year 1.4%.

Now the entertainment. Begin in a kindly way with the poor devils in markets and media who are talking about a “falling dollar” as though it’s important. Currencies are one of the very few financial creatures which trade only in relation to each other. The dollar has fallen versus the euro, from $1.05/euro in the last two years to $1.18 early this week. The decline has been caused by six months of Eurozone GDP growth higher than in the US (2.3% annualized), and anticipation of the ECB’s taper of emergency ease. Three years ago the euro was closer to long-term equilibrium at $1.40, which begs the question, rising to $1.18, who is still weak?

Another pattern: the dollar has fallen since last winter because the Fed looks less aggressive now than then. Higher rates expected here, global money flows here; lower and flows out. Last: The WSJ dollar index is exactly the same today as it was one year ago (86.37 today vs. 86.86).

Shift to another market: stocks. “New record high” is the recent the daily chatter, and the silly thing really has gained 12% in the last year. I am personally grateful, and up is better than down. But I don’t know anyone with a solid theory, except that corporate earnings are good, and US multi-nationals are well-managed and very attractive. We do not send secret police to drag away the CEOs of major corporations who have violated Party policy by borrowing too many yuan to invest overseas to escape from the Party.

The most entertaining stock market analysis (and unintended humor) I’ve seen this week: Jeremy Grantham’s GMO Quarterly Letter. He says that stock investors and markets have not behaved the way he knows they should behave.

The Fed, oh my. Vice Chair Stanley Fischer gave an important speech on Monday which addressed the Fed’s leading challenge: “The Low Level of Global Real Interest Rates.” Are they low, or new normal? Should they rise, will they rise, or might we have to push them? Or will recovering economies and employment and wages reintroduce inflation and do the rate-lifting? Why are they so low, so persistently so, and all over the world at the same time?

Fischer is brilliant, arguably the most-experienced central banker ever, and has always demonstrated fine judgment. His speech is thorough, carefully thought-out, well-presented, and… no answers. It is very much worth reading, as it illustrates Yellen’s problem: do we pre-empt a potentially overheating job market, or continue imperceptible tightening, or stop?

It may not be Yellen’s problem for long. Speculation has ex-Goldman Gary Cohn, presently Director of the National Economic Council in the lead as her successor. He would be far better than several others, but is still questionable. This morning Cohn was the designated White House bugler taking credit for the excellent job numbers (all administrations do that). But he continued to speak, auditioning for the Fed job: big-talk determination to ramp GDP growth to 3% — which nobody knows how to do. His boss has indicated preference for a “low interest rate” Fed chair, common to all presidents, not just to real estate developers.

Last on the Fed front, 91-year-old Alan Greenspan this week gave one of his standard Tales From The Crypt interviews: “The real problem is that when the bond-market bubble collapses, long-term interest rates will rise. We are moving into a… stagflation not seen since the 1970s.”

With all respect due to the Fed chair who allowed the worst credit disaster of all time, three things: first, if long-term rates rise suddenly, we will have a recession and then they will fall. Second: if you have evidence of stagflation — any ‘flation of any kind — tell us where we can go to see it. Third, please never speak in public without first apologizing, and then conclude by apologizing.

The US 10-year T-note in the last year. For a while this week it looked as though it might make a run at the 2.15% bottom in June, but the payroll numbers ended that: 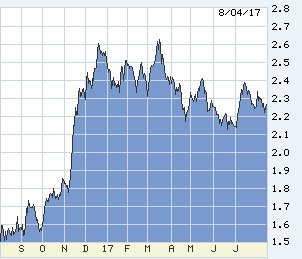 The US 2-year T-note has been unmoved by everything, essentially the same Fed forecast since mid-June: don’t bother us until the Fed begins its balance sheet bleed in September:

The Atlanta Fed has posted its first tentative hint for Q3, a burst to 3.7% annualized growth. That likely won’t last, but the Tracker is the best week-to-week GDP forecaster we’ve ever had. 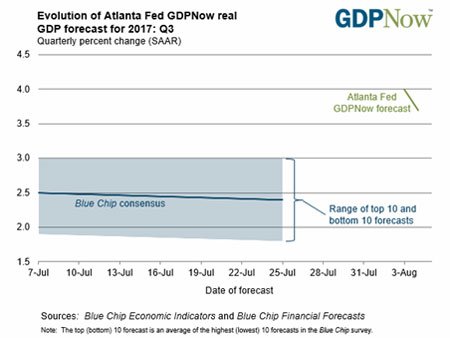 The ECRI is dead-center Goldilocks: 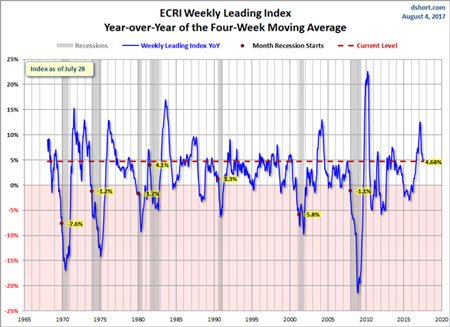