The economic news is excellent. The other news is not.

The first estimate of second-quarter GDP arrived this morning, plus 2.6% annualized. Q1 was revised down from 1.4% to 1.2%. Add the two quarter results together, divide by two, and we have 1.8% annualized growth in the first half. Nothing wrong with that, especially if the rest of the year follows Q2 upward. And add a little Kentucky windage: there is a mountain of evidence that Q1 GDP has been under-reported in each of the last several years. Thus the economy is very close to the Fed’s 2% growth forecast.

Inflation is still under-performing, but hardly bad news. There is no repeat of the fearful prospect of deflation in 2001-2002, or 2008-2012. Core inflation in 2016 was revised down from 1.6% to 1.5%, and is running close to that in 2017. With inflation so low it’s impossible to expect wages to be growing steeply, and they are not. The Employment Cost Index, a very broad gauge including benefits is running 2.4% year-over-year. A net after-inflation annual gain of 1% is hardly exciting, but it’s real money.

A caution to all: an economic time like this, in which central banks and markets seem distant from normal patterns, and all cyclical road markers are painted over is an invitation to creative analysis. Not necessarily deceitful, but distorted. A new analysis from Seeking Alpha, a respected outfit announces a slowing housing market and deteriorating overall economy. Its advice to avoid stocks of homebuilders may be wise (I have no idea), but the analysis itself is sixteen pages of distortion. No need to read the copy, just look at the pictures here — a succession of economic charts, each one marked-up by the author as a dangerous downtrend. See for yourself — each chart is truly flat, wobbling across baseline, trendless and exactly what we should see in a 2% economy.

New and good economic news today… and markets are dead. Stocks wandered upwards early in the week on strong earnings news and a benign Fed meeting. With 34% of S&P 500 stocks reporting, 78 percent have beaten expectations on the bottom line and 73 percent have topped on sales. Today markets are as unchanged as unchanged gets. A new North Korean missile test this morning indicated enough range to reach anywhere in the US, and still no change in markets.

It is summer, this weekend is lease-turnover in the Hamptons, bigshots headed to their half-million-for-August rentals, so maybe that’s it. Can’t be bothered to trade while rounding up the nannies and the helicopter.

But there is more to it than that. This week began with the president’s daily effort to bully Sessions from office. Then on Tuesday, of 52 Republicans in the senate, nine voted against McConnell’s secret Obamacare repeal-and-replace, and seven voted against complete repeal. More senators would have voted against both measures, but as they were already dead, senators instead voted “aye” to seek cover from angry bases at home. Also on Tuesday the president spoke to the Boy Scout quadrennial jamboree, turning it into a Nuremburg rally for which the chief of scouts yesterday apologized to all scouts and the nation. On Wednesday without consultation with congress, cabinet or military chiefs came another tweet, banning transgender people from the military.

Yesterday, holy cow… the new White House director of communications, Scaramucci, revisited the flight of Icarus to the sun, an entire career burnt out in four days. Then in the senate last night into wee hours, despite presidential bullying of Alaska’s Lisa Murkowski and the veep’s wheedling and McConnell’s alleged parliamentary skill, played out the spectacle of aimless voting on Obamacare and the ultimate demise of “skinny repeal.” John McCain with perhaps months to live put the wooden stake into the proceedings.

Also yesterday, more importantly, Republican senators (Sasse, Graham, Grassley…) flipped from their grim and silent tolerance of the president to make clear that they will not tolerate the removal of Sessions or Mueller, nor allow the Justice Department to be highjacked to Trump’s personal benefit.

The Republican break with the president is underway. The NYT’s token Republican on its Op-Ed pages opened his column this way:

“Donald Trump’s campaign against his attorney general, Jeff Sessions, in which he is seemingly attempting to insult and humiliate and tweet-shame Sessions into resignation, is an insanely stupid exercise. It is a multitiered tower of political idiocy, a sublime monument to the moronic, a gaudy, gleaming, Ozymandian folly that leaves many of the president’s prior efforts in its shade.”

Depending on the president’s near-future behavior, the way is clear for the next step in this drama. A delegation of congressional Republican leadership will visit the White House to tell the president to enter mothballs. To execute his remaining term in low and remote profile. Or else. After this week, the necessary votes for the 25th Amendment are in place, held back by the deep hope among even opponents of the president that such an act can be avoided.

But I can’t end with that — must find some humor. Douthat’s column included this sentence: “Trying to defenestrate Sessions… will make things worse….”

“Defenestrate?” While I tried to stay awake in 10th grade European history, the prof touched on “the defenestration of Prague,” and yanked us all to curious attention. In a bit of Bohemian hobby, in 1419, 1483, and finally 1618 (the famous one) attendees at meetings in Prague who annoyed and then enraged the majority were summarily tossed out the top window.

Real estate note to usage: the window treatment of any building is known as “fenestration.” Defenestration does not mean to remove the windows, but to launch a disagreeable person out of a window.

Happily in 1618 the three men flung into involuntary flight survived the 70-foot fall by landing on a conveniently located dung heap.

In Washington DC soon such flights may be common. To a few, wish the fortunate 1618 outcome.

The 10-year US T-note, stuck in range, growing grass: 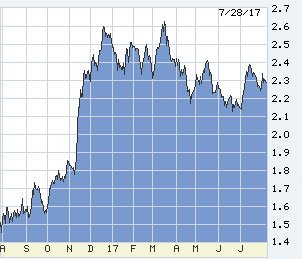 There is a lot of noise in the recent CPI inflation chart (note that the Fed’s preferred “PCE core” has run about a half-percent lower, well below its 2% target). The Fed will stay on track, announcing the trim of its balance sheet in September, and another rate hike in December unless new inflation data say that down has become a trend: 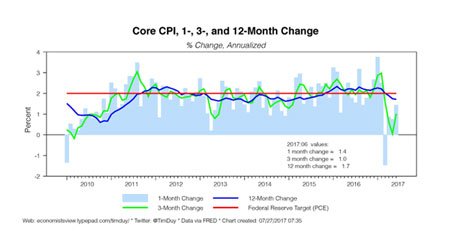 A woodcut of the 1618 defenestration. The Bohemians were on to something: 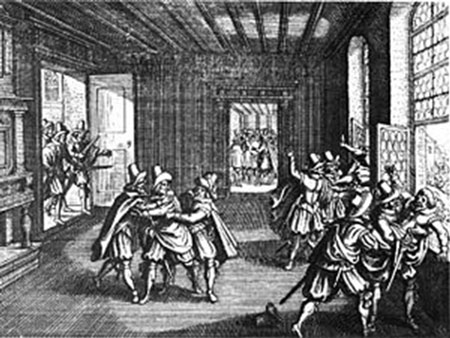 The New Town Hall as it is today, the top window the point of exit in 1419: 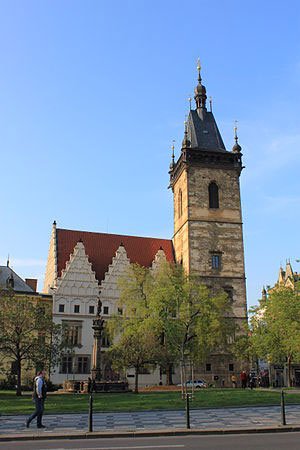 And the Chancellery as it is today, the launching pad in 1618, the dark pillar to the right a monument to the occasion: 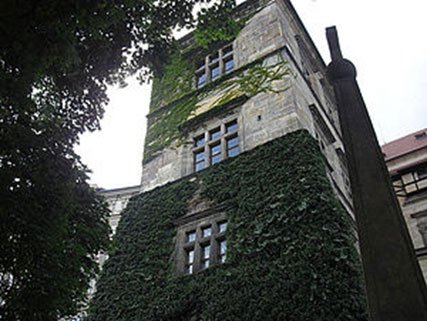