Quiet on the surface, still. The 10-year T-note opened the week at 2.39% and is finishing at 2.32%, mortgages stuck at 4.125% The Dow set another record high, ho-hum, beginning Monday at 21,386, ending at 21,621 — the gain entirely within fifteen minutes of the release of Chair Yellen’s peaceful semi-annual testimony to Congress.

New economic data supported any mid-range opinion which you may like. If you think we’re slowing, you could find that. If you think growth-on-trend, 2% GDP, that too.

The one set of data beyond argument: inflation is tapering well short of the Fed’s 2% target. Yellen still argues that suppressed inflation is “transitory,” as she has during her entire four-year term. She also still argues that unemployment as low as it is sooner or later will mean wage growth beyond productivity gains, and inflation. Nevermind that early in her term the theoretical trigger rate for unemployment/inflation was 6.5%.

Yellen knows all of that and has acted accordingly, tip-toeing upward the cost of money, and doing so without the slightest “tightening” in credit conditions. I’m biased — I’m a believer in the central bank function, especially firefighting, no matter how prone to error, and I’m a fan of Yellen. Throughout her public life she has shown extraordinary curiosity, the self-discipline to doubt her own beliefs and reflexes, accepted new evidence no matter how unsettling, and avoided all of the many doctrinaire traps.

Mark that last sentence, please. Note the absence of those traits among so much of the public today, of both political wings, and hence among elected officials. Democracy at work: we get what we want.

Backing away quickly from the immediate scene, this is an extraordinary time. The global economy is doing things for which we have no frame of reference, and our government is decapitated.

So look elsewhere for wisdom.

Inside the current Fed there is one bright new light, Robert Kaplan, president of the Dallas Fed. He is on the trail of what is different this time, in particular the global absence of inflation. The full text of his speech yesterday is here, and the most important section describes the unprecedented impact of technology on business “pricing power” — and if business pricing power is capped, so is the power of labor.

Another person offered concise thoughts on our economic situation, and its impact on our society and politics. You may recognize his name: Bernanke. Lord, how I miss him. Yellen is good, but Bernanke had gravitas — the sheer weight of intellect and public presence which demolished fruitcakes.

You will not hear a word from Kaplan or Bernanke in support of today’s most common political prescriptions for the economy. None of the following will be useful: tax cuts or increases, more regulation or less, tax “reform” which merely tilts the table, less government or more. All are non-productive wrestling in the net.

Bernanke blogs occasionally, the only Fed chair emeritus to do so. He would not interfere with the current chair’s immediate tasks, but he does have things to say. “My talk is entitled “When Growth Is Not Enough” and is strongly influenced by recent political developments, which have cast a bright light on some disturbing economic and social trends.”

And then he went quickly to the heart of the matter: “Despite the sustained cyclical upswing and the country’s fundamental strengths, Americans seem exceptionally dissatisfied with the economy.” He identifies four patterns in general unhappiness: 1) stagnant earnings, 2) declining economic and social mobility (90% of Americans born in the 1940s would earn more than their parents; born in the ‘80s… half), 3) social dysfunction associated with economically distressed areas and groups, and 4) political alienation.

Causes follow, one above all: “The immediate postwar era, say 1945-1970, and America’s monopoly position resulted in widely shared economic gains. It’s not really surprising that the period evokes nostalgia for a time of national greatness.”

There is nothing anyone can do to recreate America’s postwar advantages. Bernanke laments our failure then, since, and now to react to the fading of those advantages.

“Whatever one’s views of Donald Trump, he deserves credit, as a presidential candidate for recognizing the deep frustrations of the American forgotten man.”

Here is Bernanke’s prescription — what could have begun in the 1960s, and still eludes us as both parties prefer base-pandering to hard work:

“It’s clear in retrospect that a great deal more could have been done, for example, to expand job training and re-training opportunities, especially for the less educated; to provide transition assistance for displaced workers, including support for internal migration; to mitigate residential and educational segregation and increase the access of those left behind to employment and educational opportunities; to promote community redevelopment, through grants, infrastructure construction, and other means; and to address serious social ills through addiction programs, criminal justice reform, and the like.”

In conclusion Bernanke emphasized the need for bottom-up policies, not traditional top-down; and forward-looking, not backward-looking to old agendas. And how difficult it will be to change public policy, and even having done so to attain results.

No time like the present. And if you are demoralized by current proceedings, read Ben’s post and take heart. We are stuck only so long as we think we are.

The US 10-year T-note now has no trend. Good economic data will push rates up, and poor news will push down: 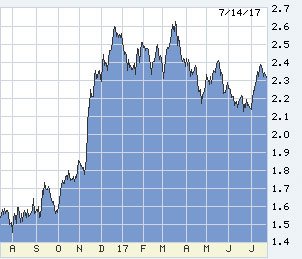 The US 2-year T-note is the Fed-predictor. New data in combination with Yellen’s testimony are tamping down prospects for future rate hikes: 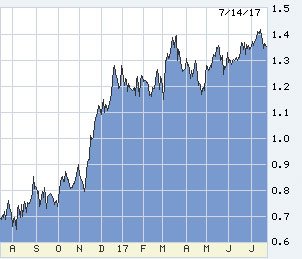 As each month since the election, a pair of charts reflect our peculiar economic/political circumstance. For 45 years the National Federation of Independent Business has surveyed its small-business members, heavy to the political right, and the results of the “optimism” question have been an excellent telltale for the overall economy. Until now. The optimism chart spiked mightily in November; although tailing slightly since, it’s still the biggest spike on record. However, the second chart shows actual small-business performance and plans, just as tepid as before. These charts have become a perfect barometer of Bernanke’s “frustration” — irrational hopes versus reality (and on both political wings): 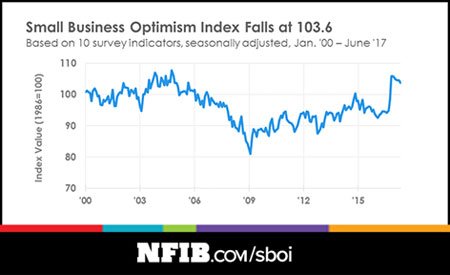 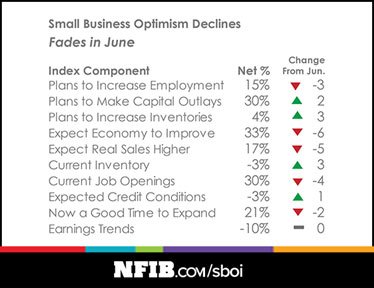