The period of exceptionally low volatility goes all the way back to March. Are markets stalled because there is no news, or is there no news because markets are stalled?

Financial markets change prices to reflect changed facts and expectations, usually economic ones but also local politics and geopolitics — and of course the old, mindless force of rebalancing more buyers than sellers or vice-versa. That’s a lot of nuthin’ happenin’.

We must look back eight months to find at the last big action, the huge jump in long-term interest rates which coincided with the election, the 10-year T-note in just six weeks from 1.78% to 2.60%, mortgages from 3.75% to 4.375%. That move peaked again in March and has slowly fizzled since. Stocks have had no fizzle, just a seemingly endless succession of new-record highs until the recent flats.

Long quiet periods are almost always an illusion that nothing is happening. Tension always builds during quiet markets, whether we can see it or not. Fabled market advisor Bob Farrell articulated ten rules of trading, one of the few sets of wisdom quoted too often. Farrell’s Rule #4: “Rapidly rising or falling markets usually go further than you think, but they do not correct by going sideways.”

If we don’t know why we have gone flat, it’s a reach to guess at the next move, up or down — but it will be one of the two, and the longer we stay flat, the more violent.

Instead of predicting, or embracing boom or doom and then finding supporting evidence, ask “What has changed?” In what ways did the world or nation change to create flatness, and see if shedding that light provides hints for what’s coming.

Start big. As a global economic matter, nothing substantial has happened since last fall with the possible exception of soft prices for oil, which in itself has little net effect, hurting some, benefiting others. Since US frackers are the swing producers, oil can’t crash below the frackers’ minimum price, which is close to $40/bbl and where we are. Nothing is underway to hurt oil demand.

Global politics break into direct economic impact, and “geopolitics,” the all-time euphemism for risk of war. Seven-and-a-half billion people are busy with all sorts of things, but in the last year only two big changes: the potential for Brexit chaos, and the sudden weakness in Britain’s government. These twin uncertainties are enough to freeze anything.

Nothing much has changed in Asia. Japan festers on, China tries to rationalize its economy via top-down control but nothing new.

Geo-political risks are rising in the Middle East as the US reduces its hyper-exposure. The muscle-flexing by an economically deteriorating Saudi Arabia is unsettling, but all actors in the area still suppress big conflicts in favor of noise. Smart, too. Russia’s ambitions are limited by economic distress, and the embarrassing exposure of its mischief-making.

So far, so good. Dull markets reflect a dull outside world.

The action is here in the US. In utmost political delicacy, trying not to offend: US government has moved from nearly 20 years of gridlock to something like decapitation. It may last, and it may not. Lasting: each political party is split, radical wings preventing bi-partisan action, and the Republican majority too thin to act while the party is so divided. The wild card is of course the president, ineffective in the first six months but capable of dramatic action at any time. Possible: the government moves on without the president, in limited ways but enough to keep the trains running on time.

The agenda is in the hands of the White House and the Republican leaders in Congress. They have been stalled, entangled in in trivia like the travel ban and off-point upsets in the Oval Office, and the agenda itself is prone to stall because it has only minority national public support. Congress may become un-stuck at any moment. The most immediate marker: health care. If Congress cannot deliver a substitute for Obamacare, it will have even more trouble with the other big items, tax reform, tax cuts, infrastructure, and regulatory relief.

Decapitation causes no particular economic harm, but an open-ended stall would tend to unwind the post-election market moves, especially belief in economic stimulus. Much as I believe in basic US economic health, and the Fed’s intention to raise interest rates (modestly), if health care fails in Congress next week the market reaction will be down, more likely mortgages and long-term interest rates than stocks.

If Congress and the White House suddenly begin to find traction, that will support both rates and stocks.

The 10-year T-note in the last year. Hardly moving at all, but the movement is down: 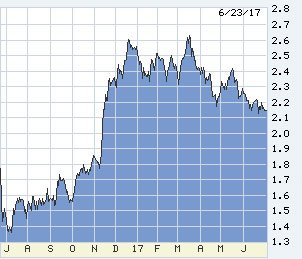 The 2-year T-note has stopped its rise, halting expectations of the next Fed hike: 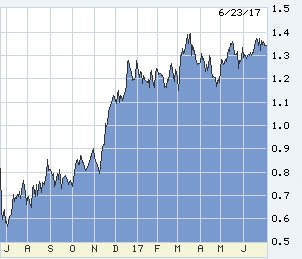