A two-month period of market calm will be at risk after the Fed’s meeting next Wednesday, and the tea leaves are forming an unusual pattern.

Wait a minute! How can you say “calm” when the stock market and Bitcoin have mad-tulip disease!?!

Because stocks frequently do odd things, for good reason and none. And regulators would prefer that markets teach the e-Ponzi yahoos another painful lesson, rather than to intervene. The barometer of global risk is the US 10-year T-note, and it has traded within a range 2.40% to 2.30% since the first of October. Even the crickets are asleep.

The bond market is home to the world’s anxious, depressed, and worry-warts. Everyone in it believes that a reliable sign of danger ahead is snoring crickets. In markets, overlong sound sleep has a sudden and unkind end.

And of course good news is the enemy of low bond and mortgage yields. Damned good news overnight: Theresa May, flayed by opponents and friends alike has cut a deal with the Euros which will let trade negotiations proceed. A favorite doom-scenario has been a Brexit implosion, and that’s off the table.

In more good news (this is painful), the US economy is just fine. GDP at 3.5% annualized growth is running nearly double the Fed’s speed limit. 228,000 net-new jobs in November, and despite hurricanes the average monthly gain in 2017 has been 174,000. New claims for unemployment insurance reached a 47-year low — the US population then two-thirds of today. The twin ISM surveys of purchasing managers found sustained heat in November.

That’s the end of the list of things we can reasonably think that we understand.

If you’re outside the bond market, you may find pleasure in the following addendum, the things we don’t know, and confessions of the things about which we know less today than we used to think we did. Of course, bond-market people will find anxiety in anything.

In today’s report of the November job market, the unemployment rate is now 4.1%. But year-over-year growth in wages is stuck at 2.5%. A companion report of unit labor costs, a broad measure of compensation after an up-blip in the 2nd quarter fainted in the 3rd, again 2.8% annualized.

Back, say four years ago when unemployment was falling fast but wages declined to grow, the authorities could nod and say “These things happen.” The Fed assumed it would need to begin brisk rate hikes when unemployment fell to 6.5%. By two years ago, mainstream economists in and out of the Fed began professorial mumbling about analysis underway and possible causes of an anomaly. Now the honest ones admit that we do not have even a theoretical path to exploration of the impossible underway.

Robert Kaplan is the new president of the Dallas Fed, ex-Goldman (of course) and a ton of private-sector experience. When Kaplan has something to say, he is direct, and has a lovely sense for the obvious. He is listening to business managers, listening hard — he says he consults with 30 CEOs each month. Everyone has a sense that technology is involved in the impossibilities unfolding, but Kaplan gave the NYT a specific: business operators feel that the effects of technology are intensifying, their “pricing power” deteriorating.

That’s the flat opposite of everything we thought we knew about wages and prices. No wonder business has not reacted to the tax bill — it is irrelevant to what is taking place.

You’re the Fed… what are you going to do? One of Ben Bernanke’s gifts to us was clear thinking about a balance-of-risks approach. If the Fed proceeds with its quarter-point water torture, what’s the risk that it precipitates new deflation pressure or a recession or both? If it does not proceed, what’s the risk that labor scarcity at last produces a wage spiral?

If you guess wrong, which mistake is the more dangerous?

In the last decade global central banks to their astonishment demonstrated that they cannot create 2%-plus inflation in these circumstances (whatever we may one day understand these circumstances to have been). Previous to this last decade no one would have believed that money-printing on this scale could fail. Yet, the central banks did demonstrate that they could prevent a credit collapse from becoming a deflationary spiral.

Central banks do have a lot of experience with the counter-risk of wage-price spiral, and both theoretical and practical confidence that the only way to stop an inflationary spiral is to throw many millions of people out of work. This, the central banks have done many times and places.

On balance of risks, one risk I can meliorate with extraordinary but tested means and not a lot of pain. Just did that. The other risk I can fix only by inflicting fantastic pain and might end up by recreating risk #1. Therefore adopt policy to pre-empt the bigger risk of wage spiral.

Back to things we can know and measure. The Fed is not “tight” or even close to it. “Tight” refers to the availability of credit (from the old days of “disintermediation” as the intentional Fed cause of recessions). The upper end of the Fed’s cost of money (“Fed funds”) is 1.25% and will go on Wednesday to 1.50%. The Fed says it’s likely to be at 2.25% next Christmas, and 3.00% the one after that. Nothing in that progression will choke off the supply of credit, nor make credit painfully expensive.

Boiled down farther, the Fed is in the process of raising the cost of money above the inflation rate (by next summer or fall). No one can know how far above the rate of inflation may become painful and slow the economy, but it’s not likely in 2018.

No insult intended to central banks, but it looks as though the global economy is less sensitive to them than to the nouveau brew of trade, technology, and price and wage suppression.

The US 10-year T-note, the narrow, post-October trading range clear. However, one possible signal: the ever-so-slight slope of increase within the range, bottoms ascending. Odds favor going out the top: 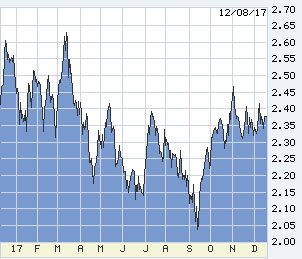 The 2-year T-note is the Fed’s telltale. You’ll hear a great deal of alleged alarm about a flattening yield curve, but this time is different. 🙂 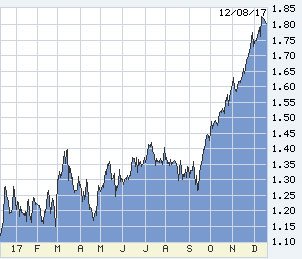 Fed funds history, back to the edge of the previously known universe: