A big week for news, especially for mid-December, but so scattered across the economic spectrum that sorting important versus not takes some work.

After Wednesday’s hike in the Fed funds rate (overnight cost of money) to 1.50%, the spread between short-term money (2-year T-note) and long (10-year T-note) reached its narrowest in ten years, since just before the Great Recession.

A narrowing spread is a “flat curve,” and short rates above long is “inverted.” Given the season, you may chant in Gregorian fashion, or in the spirit of Clark Griswold sing to the tune of “Here Comes Santa Claus” (by my fellow Okie, Gene Autry):

I will of course beat to death the subject in weeks and months ahead. I suspect that the flattening curve this time will not mean what it used to, nor did it in 2000 nor 2007. What does matter immediately: how far up can the Fed push short rates before bulldozing mortgage rates higher? On Wednesday, Fed up .25%, mortgages down slightly. Down.

In the spirit of small children on Christmas morning, nobody knows. Have to wait. No, you can’t open presents early.

One thing we do know: the economy is fine. Really fine. November retail sales blew out the top, up .8% for the month and about triple the forecast.

What will the Fed do about an economy perhaps overheating? Post-meeting forecasts for action stayed about the same. The Fed will drip .25% on your forehead every three or four months until something happens.

Back to unknowns. The tax bill will probably pass, although not even those voting for it know what’s in it; and even the few back-room crafters have no idea what the economic impact will be. Michael Bloomberg, former successful Republican mayor of NYC and who knows a thing or two about money calls the bill “a trillion-dollar bungle,” and is painfully specific in his criticism. The tax bill is likely already boosting a stock market which does not need a boost. Cutting corporate taxes in half will do that.

Chair Yellen in her farewell press conference was asked repeatedly about the effects of the tax bill and dodged beautifully. The Fed’s other words, plans, and actions suggest that it expects little effect on the overall economy.

The largest unknown facing us and the Fed: what’s the deal with a strong economy and still no inflation, or faster growth in wages? One answer: our preoccupation with inflation is ever-vigilance for a return of the great inflation wave, 1962-1982. Inflation (core CPI) did rattle from 2.5% to 5.5% until 1993, but since then — a long time, people — we’ve had only three episodes measured in months as high as 2.5%.

The Fed has done well, global trade has been a suppressant, but the ancient assumption that “productivity” has held down inflation is wearing thin. What else is in play?

Sometimes data speaks to us but we are listening to other music. Why would inflation drop below 2% and stay there for 25 years? Why not 1%? Or 2.5%? Or 0.5%? Why so stable? Here’s one new-economy hunch: technology has destroyed pricing power — the ability of business to raise prices — but is not suicidal, and does not encourage businesses to drop prices below survival level. Thus a centerline of 1.5%: capped by disruption, but not a negative, deflationary death-spiral.

The NYT ran a story this week so appropriate for holiday travel, on the changing economics of airport parking. With a photo of an empty garage at Boston’s Logan.

All the way back to my first flights on prop-passenger airlines in the 1950s, airport parking lots have been full. Except for Level 5, on the roof and a crow’s flight from the stairs. Inevitable wasteful cruising from floor to floor, or car-stalking a family with luggage perhaps about to leave a space. The first advent of technology: lighted parking entrance signs saying which levels are full or open — but always wrong. Cruise on.

Uber and Lyft and technology have upset airport economics. Hail a cheap ride, and to hell with cruising and airport gouging. Airports counter-attack: big fees for cheap-ride access. Counter-counter: cheap rides in cahoots with airport hotels running protection rackets (pay an annual fee and get a cheap space). And of course apps and apps and apps, some actually able to find empty spaces in real time.

The result: to stay in business every player has to make a buck. But anyone trying to make two bucks will be app-punished back into line.

Thus one-buck inflation. Every central bank trying to get to two-buck, and can’t.

The US 10-year T-note. Paint drying, but not forever: 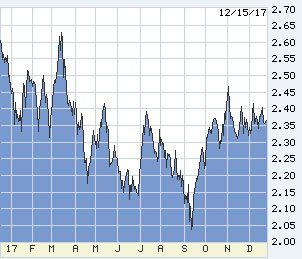 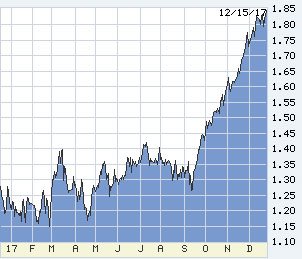 The 2s-to-10s spread back to mid-‘70s, shaded bars were recessions:

Core CPI inflation back to 1955. If a chart of anything else looked like this, nobody would pay any attention at all:

The Fed’s damned little dots, its forecast intentions to raise the cost of money in the future. Each dot is a vote by a Fed governor or regional fed president. Two regional presidents are certifiable fruitcake-hawks (KC’s George and Cleveland’s Mester), and a third has recently lost his marble (Boston’s Rosengren). Also two possible bird-brains on the dove side (Chicago’s Evans and Minneapolis’ Kashkari). Thus if you ignore the top three dots and the bottom two, you’ll get a pretty good forecast, three hikes next year and the next: 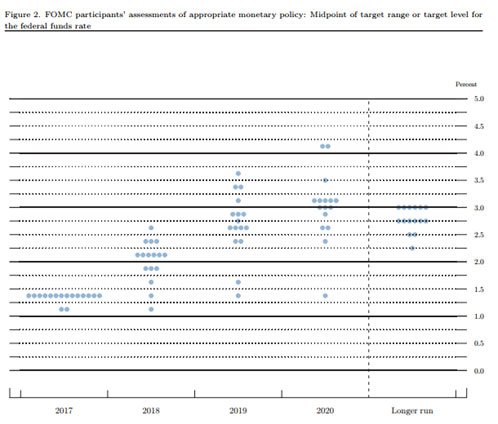 Politics. No way to get off easily. The National Federation of Independent Business is a conservative group. Its monthly survey of “optimism” used to be a very good barometer of the overall economy. Now it’s nothing but a barometer of pleasure with the current administration’s efforts to help business. Note the election spike and the new one this month due to optimism about tax bill passage. In the second chart, note no change in real business, just future hopes: 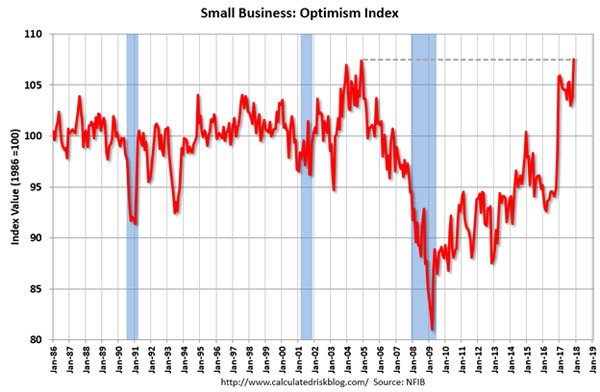 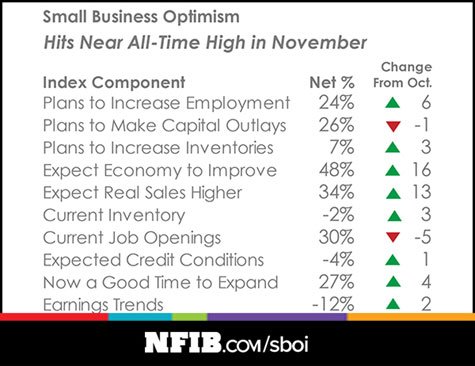