The Republican tax bill is likely to pass, although we won’t know all that’s in it until it comes out of conference committee with the House.

But the tax bill is not the important part — the Big Deal is how deep we are in a period of global economic change without precedent, but behaving as though old precedents still apply. That’s the important thread in the following.

Imminent passage of the bill goosed the stock market on Thursday and pushed up on long-term interest rates, but all of that is reversing this morning on Flynn’s plea and flipping to state’s evidence on Russia. In our whole history, only Nixon in 1968 after election but before taking office directly interfered with the foreign policy of a sitting president.

The tax bill is the worst single piece of legislation since… shoot, since Obamacare in 2010. There is no partisan monopoly on badly crafted law. One step further, this tax bill is easily the worst piece of domestic tax legislation since the modern era began with the income tax. Limiting criticism to “domestic” leaves room for the 1930 Smoot-Hawley tariff as worst-ever, period.

“Worst” defined as intentionally deceptive, anti-reform by complexity, opaque to taxpayers, wasteful by adding to national debt, and with little economic effect except a huge giveaway to large corporations. Here’s the deal: the primary intent of the bill is to cut corporate tax rates from 35% to 20%. Each percentage point is worth $10 billion per year, over ten years $100 billion, times fifteen percentage points the entire over-ten-years add to the deficit of $1.5 trillion is the corporate freebie.

The rest of the bill is a con-man hustle, pretending there is a tax cut for anyone else. There are cuts for some people and situations, but for every one a countervailing increase. Except at the end of ten years, when the corporate cuts survive and all of the others will sunset. That poison-pill is designed so that if Republicans are tossed from office, Democrats will then either have to vote for tax increases or re-confirm the cuts. As-is, the personal tax cuts will be too small to notice and quickly overwhelmed by rising costs of health care, the bi-partisan flub. The provisions for pass-through entities are gibberish.

The court of politics will settle the tax bill’s partisan matters, and the higher court of economics will also issue a verdict. Try to separate the sleazy aspects of the bill from the underlying economic theory: we can reasonably believe that a faster economy raises most boats, although a faster economy derived from tax cuts will not generate replacement revenue. The question in this tax bill: will an immense cut for corporations produce a faster economy, new investment, increased productivity, higher wages, and at home instead of overseas?

Dropping US rates may make US investment preferable, but we have no way to know. Our competitors are adept. Not even the European Union, population 510 million has been able to stop the tax-competitiveness shenanigans of five million Irish.

Will corporate tax cuts boost US wages? I was born at night, but not last night.
The one angle with theoretical merit: investment leading to productivity. Conceivably the corporate cuts will encourage more investments to earn more money because profits will be less-taxed. And the bill provides immediate expensing of capital investment, businesses no longer having to wait for the tax-sheltering of income by depreciation over time.

Investment linkage to productivity has been central to all Fed thinking. The non-inflationary speed limit of the economy is defined as population growth plus gains in productivity. Our population growth is slowing (may slow more if we refuse immigration, most of our growth), about 1% per year, and productivity has slowed as well, below 1%. That’s where the Fed gets its 2% current limit. Grow faster than that, and get inflation, not more “real” growth. Thus if we grow faster than the speed limit, the Fed will pull us over.

That thinking had observable merit in the days of heavy manufacturing. To enjoy productivity we had to build factories. Today, the most productive aspects of our economy involve groups of twenty-somethings in sparsely furnished offices, perhaps with a climbing wall and close to a Starbucks, capital investment limited to paying rent and salaries until revenue begins (all of the kids already had laptops).

We are also in a new era of inflation and wages. Both should be growing and are not and nobody knows for sure why not.

The Cleveland Fed this week posted a study of the long-term relationship between productivity and interest rates. Textbook theory holds that low productivity leads to low interest rates. The study says that since 1914 the opposite has been true, and in the modern segment since 1948 there is no relationship at all (“…The correlation… statistically indistinguishable from zero.”)

Interest rates are a near-perfect proxy also for inflation — they never diverge for long. We must be careful with, if A is to B, then B is to C (Ambrose Bierce: “If one man can dig a post-hole in 60 seconds, then 60 men can dig a post-hole in one second”). However, there’s a growing chance that our thinking about investment, productivity, inflation, the speed limit, and the Fed’s neutral rate of interest (r*) is — charitably — obsolete. Thus, yet another moment to consider Richard Thaler’s 2017 Nobel Prize for Economics, whose work reveals that economies are not governed by rational expectations, but irrational ones.

Most likely, this tax bill will provide extended analytic and political entertainment but little economic effect except fatter bottom lines for big business.

Of all of the goofy things happening, the one this week worth keeping an eye on is Tillerson’s fate. He has been one of the real-world people insulating the outside world from the Trump era. Domestic effects can be upsetting, but not dangerous. If Tillerson is canned and replaced by Mike Pompeo (now safely at CIA), and Pompeo by senator Tom Cotton (R. Ark.), then the cautious and protective screen of Mattis-McMaster-Kelly will lose clout. A shift like that can have infinitely more impact on markets than this tax bill.

Chart: the 10-year US T-note in the last week. Cause and effect are clear in the reaction to Wednesday-Thursday elevated prospects for the tax bill, and today to Flynn’s plea: 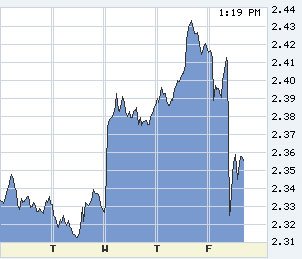 The 10-year T-note one year back shows a great deal of trading near today’s levels, which tends to keep us here. Nobody knows whether Fed rate hikes to come will bulldoze long-term rates higher, or the if Fed’s cost of money alone will rise: 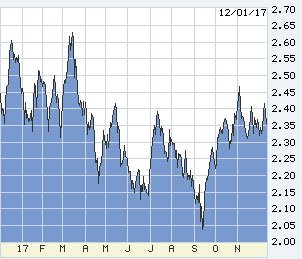 The 2-year T-note says the Fed will hike: 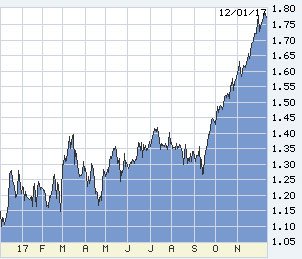 The Atlanta Fed’s GDP tracker is still hotter than all Fed forecasts, not needing a tax cut. However, if investment, productivity, rates, and inflation are not linked after all… oh, my. 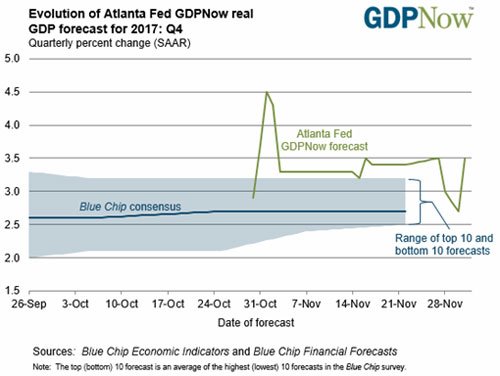