Financial markets do react to changes in financial public policy. That’s a valid axiom. So, if markets do not move when new public policy arrives, does that mean that markets no longer care? Or that the particular new policy does not matter?

Strip away other things to which markets are not reacting: the economy is chugging along above forecast, in the second half of 2017 at or above 3% annualized GDP growth but still with no increase in the slope of inflation or wages. New trade policies are more hurtful than helpful, but can stay so for years without much economic effect. The same is true for geopolitical risk: our adversaries may steal a march or two in these years, but fundamental global strengths and weaknesses are deeply anchored.

Which leaves the tax bill as the oversize turkey — or ham, depending on your tastes — arriving as early as next week. The Senate may pass its version before Thursday, which would then plunk that version along with the House one into conference committee, which usually assures passage of a final. We won’t know until then what’s in it (most of us have survived Thanksgivings with experimental stuffing), but the basic outline is clear now.

Thus, stick with that outline for now and work on perspective and overall effects.

First, it’s hard to tell how much attention the public is paying to the tax bill. A lot of the country seems more tuned-in to politics than usual, but a lot of politics now is at the level of circus and gossip, not substance. Our longstanding national tune-out of gridlock may explain markets’ non-response to the tax bill.

Second, the math. The trillion-this, trillion-that, biggest-ever, most in 30 years — all of that is numbing. I’m not sure exactly when, but a couple of decades ago we began to discuss fiscal changes — taxes, spending, deficit — as “over ten years,” which makes the changes seem bigger than they are. Over-ten-years has also been convenient camouflage for bi-partisan Congressional fraud, as in years eight-nine-ten spending has always turned out bigger and revenue smaller.

With apologies to Everett Dirksen, $1.5 trillion used to be a lot of money. But, divide this proposed tax cut by ten, $150 billion per year, that’s barely 3.8% of annual federal spending (total FOUR trillion). As a percent of our $19.5 trillion GDP, an undetectable 0.8%. That’s an accounting error. In the same range as total repair costs of this year’s hurricanes.

The overall structure of the tax bill is clear. It is not “reform” in any sense of the word. It adds more complexity than it removes and opens many gates to new tax gaming. A better term would be tax “reallocation,” as nearly three-quarters of the tax cut will go to big business. Will this reallocation have positive effect on the economy?

At Tuesday’s gathering of the WSJ’s CEO Council (229 members), a WSJ editor on stage with the prideful and log-rolling Gary Cohn asked the CEOs how many intended to expand investments because of the tax bill. The WSJ’s own coverage says that only “a smattering” of hands rose. The YouTube video shows none raised above shoulder level. Cohn looked as though slapped with a mackerel and blurted “Why aren’t the other hands up?” No one answered.

The top risk in this tax bill has been that it might stimulate the economy. The Fed and other economists are in a running fight about the speed limit of our economy, but all non-political mainstreamers agree that if we’re not at growth capacity now, we’re going too fast. Any significant stimulus would force the Fed to react, raising rates and the risk of aborting growth altogether. Small magnitude aside, the bill would push chocolates to big businesses in a world already bloated with excess capacity (see “China”). Making an unneeded investment tax-deductible does not make it needed. Adding to corporate bottom lines has never added to wages, let alone in a world drowning in labor.

The hardest part of true tax reform, especially if neutral to revenue and the deficit, is a good political balance between cutting taxes for some taxpayers and raising taxes on others to compensate. The great 1987 reform raised revenue by closing anti-productive loopholes and in exchange cutting tax brackets. Today’s bill does some of that for the middle class by increasing the standard deduction. However, the offsetting loopholes closed are not abusive ones, or non-productive. And the public has not noticed the things it will lose.

Example: both the House and Senate versions hurt the 20-year-old tax exemption for the sale of a primary residence. In current law, you get the exemption if you’ve lived in a primary home for two of the last five years; the new bill proposes five of the last eight. There is no economic benefit to this change, just stealing one of your few protections against inflation-boosted taxes. Acting like Democrats, the Republicans propose an expanded federal deficit, and reaching into your wallet for money to give to their buddies.

Republicans desperate for revenue have also tacked on a repeal of the Obamacare individual mandate. I am biased, my judgment clouded. My wife and I have a disabled daughter, uninsurable, who will for life depend on Medicaid. This tax bill’s economic ineffectiveness aside, its small-minded and mean spirit trouble me.

This exchange in a Senate hearing this week: when senator Orrin Hatch, chair of the Senate Finance Committee said that there were no Medicaid “cuts” in the bill, just people choosing not to sign up for Medicaid, senator Claire McCaskill snapped, “Where do you think the $300 billion is coming from? Is there a fairy that’s dropping it on the Senate?”

Despite all of the political antics, and a Fed hike coming in December, the 10-year T-note (and mortgages) are holding a two-month range: 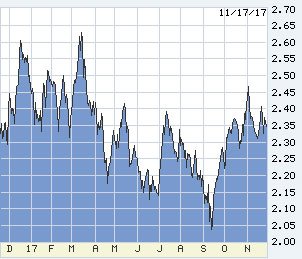 The 2-year T-note expresses the Fed’s intentions. The December hike is built-in, but not a bit of the three hikes due next year: 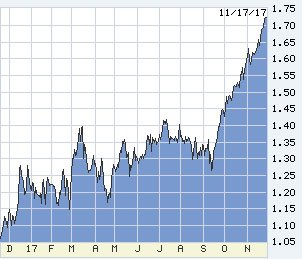 The Atlanta Fed GDP Tracker says Q4 will be hotter than anyone expected, although the consensus has slowly drifted upward during 2017: 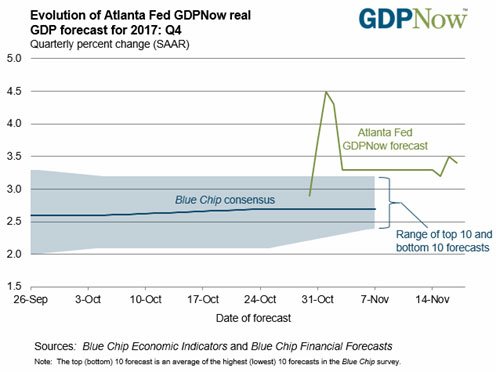