Long-term rates found bottom late this week. The rebound is not bad, mortgages still close to 4.00%, but risks have tilted upward.

The financial/economic world is odd enough today without unusual political intrusion, and thus it is more important than ever to deconstruct events and pressures into separate components.

From the most-broad perspective, it is true that national economies are synchronizing into a global expansion. Which is exceedingly rare and tends to end badly in an episode of overheating and either inflation or bubble-bursting. That is NOT what this one looks like. This one is new and different.

Several forces have combined for a couple of decades to produce an episode of synchrony. Supply chains twenty-five years ago became so entangled that traditional measures of national trade became meaningless. The Apple i-phone concept is US intellectual property exported to meet physical components manufactured and assembled all over Asia and re-exported here. My 2007 Volvo has a German engine, a Japanese transmission, and a hood logo probably made in Sweden.

The synchrony underway now is a concert of central banks, not economies. The four major regions — US, Europe, Japan, and China — from any historical perspective are each engaged in hysterical fountains of monetary ease. The US is the only one able to begin to back away, although in the most tentative tip-toeing. Our rates are rising, but financial conditions are still easy.

Never having been in this situation before, we can’t know how it ends or normalizes (if there is such a thing). China seems at the end of its debt binge. China’s central bank governor Zhou Xiaochuan has been so able (charming, too, if you get to see him) that he has overstayed every term and age limit, now at last retiring and on his way out shouting “debt danger” to the heavens, obviously with Xi’s approval. Nobody anywhere knows how to end a debt binge without some slowing economic effect, or exporting that effect via trade channels to other economies.

Europe is astride the stimulus tiger and dares not dismount. Draghi’s ECB presidency will end in 2019. In the entire 19-year existence of the ECB its chair has been held in sequence by a Hollander, a Frenchman, and an Italian; Germany all the while drumming fingers and waiting its turn. Club Med Europe is just as dependent on the ECB to protect unsustainable debt and currency mistmatch with Germany as it was when Draghi took over in 2011. Germany has been hostile to the whole stimulus effort.

Japan’s financial affairs are hopeless, dependent on the BOJ’s magic trick, making debt equal to double GDP disappear. Japan’s population is shrinking, and the last Japanese will owe a great deal of money.

It is hard to see how this synchrony symphony improves, but it might. Consider Mark Twain’ judgment of Wagner’s music: “It’s better than it sounds.”

We also cannot know effects already in train, especially in equity markets. Are they synchrony-bloated? Or overvalued by traditional measures, but under-valued in light of the fantastic and lucrative explosion of global trade? Nils Jensen, author of the Alhambra letter and concerned for years about a stock-market bubble, this month posted his clinching evidence. He observes that the long-term US GDP-to-wealth ratio has been 3.75% and is now 5.0%, aching for a fall. But the counter-argument asks, in a globalized world, more than half of S&P500 earnings derived overseas, why would the determinant of the wealth ratio be confined to US GDP? Why not global GDP, or the growth rate in global trade?

You’re a pension fund or life insurance company or endowment, and you have to buy bonds. Which ones will you buy? Especially after considering currency risk? You can earn 10.18% on Brazil’s 10-year, but paid in… what?

The Fed will push up short-term rates, which will exert pressure on long-term ones, but the ex-US buy-pressure is stronger than the Fed. The 2-year yield might rise above the 10-year in an “inversion,” previously a guarantee of recession, yet have no US economic meaning whatever.

Politics. Markets have largely ignored politics in one of the most unusual years on record. Not his week. On news that the huge corporate tax cut would be enacted but delayed, stocks thumped down this week. That move says two things: first, markets expect this tax bill to pass. Second, they expect the bill to benefit corporate earnings. If you think that the tax bill’s benefit to business will then flow to rising wages, the market disagrees with you. The market thinks that it will keep the benefits.

The US 10-year T-note in the last year. The pattern has changed: we now have substantial “resistance” to declines in the 2.30% area, and equally strong resistance to increases beyond 2.40%. Thus a forecast for a boring episode of choppiness until something happens: 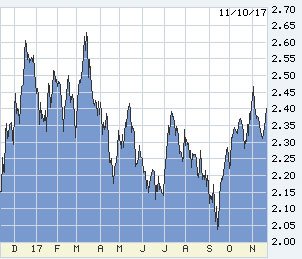 US 2-year T-note, one-year history. The Fed’s December hike is built-in, but immediately afterwards 2s will begin to price the next one, due by March. 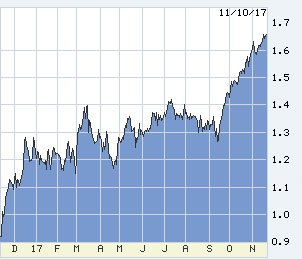 The Atlanta Tracker is on track, 3% growth in Q4 2017 — above trend by any measure, tax cut stimulus on the way, and foreign central banks’ stimulus has canceled the effect of Fed rate hikes on US long-term rates. That combination makes Fed rate-hike decisions easy: