No, it’s nothing to do with Halloween, not that I know of. And it’s not so much spooky out there as loopy.

The credit markets are addled by the continuous flow of conflicting, weird, and unprecedented information. Everyone is glued to the US 10-year Treasury note, as always, but in the past two weeks mesmerized by its yield rising toward 2.40%, a crucial spot touched in May and again in July, then retreating each time. Take out 2.40% going up, and the next stop would be a jump to 2.60%, the twin tops last December and this April, mortgages toward 4.50%. Looking backwards in time, past that 2.60% there is no chart “support” all the way to year-end 2013 and 3.00% 10-year, mortgages pressing 5.00%.

Release of the JFK files may help, diverting from current affairs the attention of those who are fond of conspiracy theories. The WSJ yesterday blew up Morningstar’s star-rating system, possibly inferior to dart-throwing. Who knew?

The immediate relief today followed a leak or rumor that Trump would choose Jerome “Jay” Powell for Fed chair. Powell would be almost as reassuring to markets as reappointment of Yellen. The other two candidates, Warsh and Taylor distinguished themselves in 2008 and 2009 by loud assertions that the Bernanke rescue was the wrong thing to do and would inevitably lead to bad inflation. Trump says he would like to put his own stamp on the Fed, but even he may grasp the Pottery Barn Rule: you break it, you own it. Trump will not own Yellen even if he re-appoints her (Obama’s fault).

Powell would reassure, but all other news is disturbing. Brent crude topped $60/bbl. The ECB announced the beginning of a long and slow taper of its bond-buying. Global stock markets are bonkers. On Monday, year-to-date orders for durable goods soaring 8.3%. Today, Q3 GDP revised up to 3.0%, and the GDP “deflator,” the Fed’s favorite measure of inflation rose from a Q2 dip to 1.7% year-over-year.

But 10s and mortgages are holding. Sort of.

And next week… not only the Fed chair announcement, but tax reform!

Never shoot at tax reform until the details are clear. Might hit something by accident. Tax cuts on the other hand, blaze away.

The history of modern tax cuts has been slapstick. In the last hundred years or so, the record-holder has been the early Reagan one, which required offset by a half-dozen increases by Reagan himself and two successors. His 1981 cut did have the accidental benefit of helping us out of the second-worst recession since the Depression, but its stated purpose was “supply side” growth so strong that new revenue would offset the cut. Hah.

The next big one was Dubya’s, which also gave accidental help to a recession, but whose purpose was to give back the Clinton budget surplus, which was not sustainable anyway, and to “starve the beast,” to pre-emptively deny revenue to big-spending Democrats. Great. Create a huge deficit so that Democrats cannot create a huge deficit.

Purpose and need aside, timing is important. Hard-heads who hate the Fed wish that fiscal policy — tax and expenditure by Congress — would replace monetary policy. Example: in a late ‘70s soft patch, Carter attempted a $50-per-taxpayer rebate (almost $250 today, real money then). By the time Congress got the rebate done, the soft patch was over and inflation was ramping to the worst ever. The Fed can move fast. Congress rarely moves.

Today we have no need for a tax cut. Absolutely, positively. “Get the economy moving again,” hogwash. It is moving. Mick Mulvaney, budget director and card-carrying Tea Pot used to have government-shutdown spells at the thought of a Democrat nickel rolling across the floor of Congress. Now he says tax and regulatory reform will bring faster GDP growth and “erase our fiscal deficit.” Maybe, but tax cuts will not.

The newest estimate of 2107 federal budget deficit has grown by $80 billion to $666 billion (that’s the Devil’s number — conspiracy!). Under current law we’ll add more than $10 trillion in ten years to our current $14 trillion national debt in markets.

At very best, a new debt-and-growth party will pressure the Fed, no matter who is in the chair to hike rates faster. Add one percentage point to the cost of our current debt, and federal spending will rise by $140 billion just for added interest.

Next week a Fed chair, tax reform, and fresh September economic numbers. The 10-year has held the battle of 2.40%, mortgages just above 4.00%, but odds favor going up.

The 10-year T-note in the last week, the Powell Rally clear today: 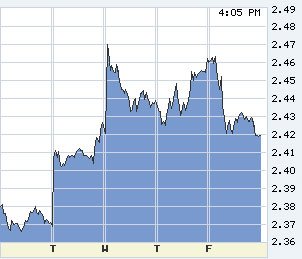 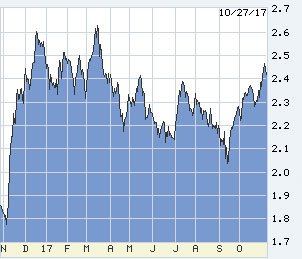 The 2-year T-note is the Fed telltale, and the Fed is still coming no matter who or what: 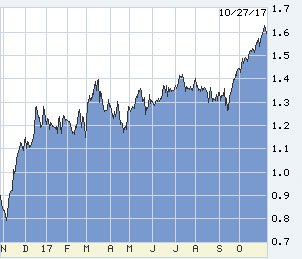